Latest
You are at:Home»Opinions»Time to talk about the Boris Brexit plan – and GBP/USD could go down

Britain has a Brexit plan – this significant development and the support of hardliners for the proposal have boosted the pound. Convincing the EU is a higher barrier hurdle to surpass. EU-UK talks top the agenda in the upcoming week. Economic figures are also eyed after miserable data on both sides of the Atlantic.

This week in Brexit: Boris has a plan

UK Prime Minister Boris Johnson has finally laid out his plan for Brexit. The detailed program includes keeping Northern Ireland aligned in some aspects with the EU and on others with the UK. The pound has reacted positively – not due to the details – but thanks to the support the proposal received from hardliners.

The Democratic Unionist Party (DUP) and most of the 28 “Spartans” – extremists within the Conservative Party – have backed the ideas. These groups had rejected the previous Brexit accord that his predecessor Theresa May brought back from Brussels.

On the other hand, the reaction to Johnson’s plan from Brussels and especially Dublin has been chilly. European Council President Donald Tusk said he was “unconvinced” while Ireland PM Leo Varadkar contradicted his British counterpart’s claim that no new physical barriers would be erected in the Emerald Isle.

Varadkar and European Commission President Jean-Claude Juncker called on the UK to release the legal text accompanying the explanatory text that was published. The devil may be in the detail.

UK opposition parties have cast doubts over the government’s plan. Nevertheless, but held back on tabling a Vote of No Confidence  (VONC) as they first want to secure a Brexit extension. In his keynote speech at the Conservative Party’s conference, Johnson insisted that the UK will leave the EU by the October 31 deadline come what may.

However, he also admitted he would have to seek an extension in case parliament fails to approve a deal – a revelation that came via a document submitted to the courts. Some fear that the PM will disobey the Benn Act, which obliges the government to seek a delay to Brexit by October 19, barring a different decision in the House of Commons.

The UK economy continues struggling according to the Markit/CIPS forward-looking Purchasing Managers’ Indexes. The Services PMI dropped to 49.5 points – below the critical 50 threshold that separates expansion from contraction. The slowdown in the UK’s largest sector joins contractionary data in the manufacturing and construction ones.

PMIs badly disappointed across the pond as well. The US ISM Manufacturing PMI fell to 47.8 – the lowest in over a decade. The services sector is still growing but at a much slower pace than predicted and at a three-year low.

This gloomy data lowered expectations for the Non-Farm Payrolls report. However, it showed a satisfactory increase of 136,000 jobs. Alongside significant revisions and a substantial drop in the Underemployment Rate to 6.9%, the US dollar managed to recover some of the ground it lost earlier in the week.

The impeachment inquiry into President Donald Trump’s dealings with Ukraine intensified with new revelations every day. Texts exchanged by diplomats seem to show that many officials were involved in pressuring Ukraine to dig up dirt against Joe Biden, Trump’s potential rival in 2020. Trump has called on Ukraine and China to investigate the former VP while he is under investigation for abusing the powers of his office for political gains.

According to polls, support for ousting the president has substantially increased but is far from convincing Republican lawmakers to abandon their standard-bearer. Trump and the administration have been fighting back.

Johnson said that his plan is a “broad landing zone,” which is the basis for negotiations. Reports that the EU set Friday, October 11, as the deadline to reach a deal, have come and gone. Nevertheless, the clock is ticking down toward the EU Summit on October 17-18. Both the bloc and the UK have agreed to engage in intense negotiations.

Former PM May reached an agreement with the EU but failed to receive support at home. Johnson is beginning in the UK and now takes it to the EU. While some 30 Labour members from Leave-voting constituencies will likely support changes to the proposal, the hardliners may abandon him. He may eventually face May’s fate of trying to appease the extremists only to see them vote against him.

The pound will cheer if the PM finds common ground with both sides and may stumble if he fails to do so. Markets are also hoping for a Brexit extension instead of a smooth exit.

Delaying Brexit depends mostly on the opposition’s moves in the upcoming week. They are unable to agree on who will replace Johnson at No. 10. They may prefer to wait before trying to oust him. Moreover, they may give him a chance to negotiate before they pass judgment. Labour leader Jeremy Corbyn aspires to become PM, but the Liberal Democrats and former Conservative members are unable to stomach the thought.

The UK economic calendar features two noteworthy releases. Mark Carney, Governor of the Bank of England, will speak on Tuesday and may provide an updated assessment on the economy. He will likely refrain from opining on what the BOE will do in case of a hard Brexit. His colleague Michael Saunders sent the pound lower in late September by indicating that damage has been done and opening the door to a rate cut.

The second substantial event is the release of monthly Gross Domestic Product figures for August, due out on Tuesday. Economists expect stagnation in that month after a considerable increase of 0.3% in July. Manufacturing Production figures, released at the same time, are also of importance. The economy contracted in the second quarter but may escape the same fate in the third quarter.

Here are the upcoming UK macro events, as they appear on the economic calendar:

The impeachment inquiry into Trump’s admitted request from Ukraine to find dirt on Biden is expected to continue at full speed. New revelations are of interest to traders, but opinion polls related to the investigation are of greater importance. Approval of the Democrats’ move surpasses disapproval, but only just. And while the president’s support is falling, it is still within previous ranges. Any change may cause jitters.

High-level trade talks are scheduled between the US and Chinese officials late in the week. Trump has rejected striking an interim deal with the world’s second-largest economy. However, Beijing has not indicated willingness to compromise on the thorny topic of Intellectual Property. Headlines coming from the Washington talks are eyed.

The minutes from the Federal Reserve’s decision to cut rates in September are expected to show splits between those worried about global growth that supported the cut and the hawks that see no rush to act. Markets will watch the data to gauge the chances of another cut in October.

The Fed also eyes inflation, and the Consumer Price Index (CPI) figures for September serve as a critical input. Core CPI is expected to remain at 2.4% yearly. The University of Michigan’s initial estimate of consumer sentiment ends the week. After long months with outcomes close to 100, confidence dropped in August and only marginally recovered in September.

Here is the list of US events from the FXStreet calendar: 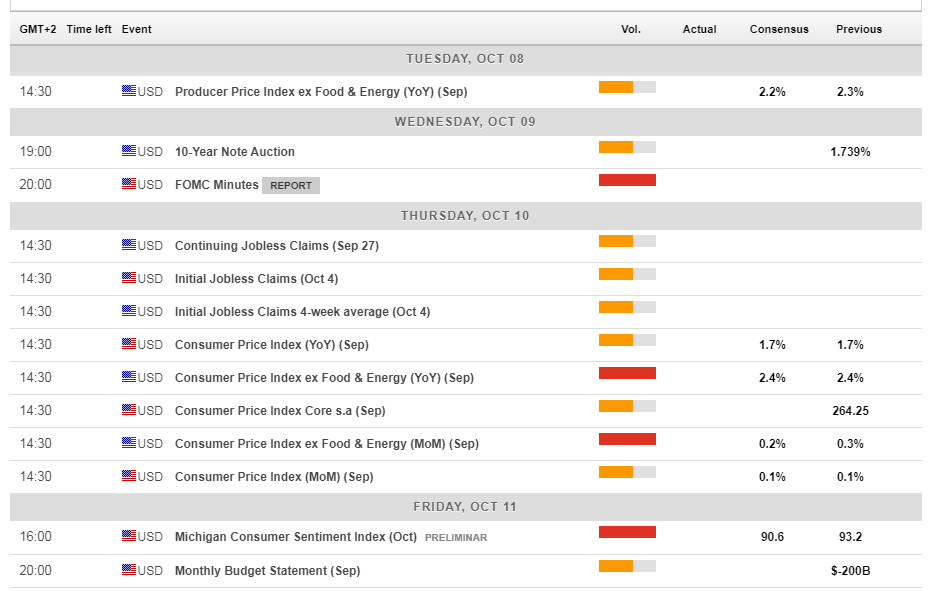 GBP/USD has lost its uptrend momentum on the daily chart but managed to hold above the 50-day Simple Moving Average (SMA). The currency pair trades below the 50 and 100 SMAs. It is capped by downtrend resistance, which has recently formed.

All in all, the picture has become more bearish.

Looking up, resistance awaits at 1.2390, which separated ranges in September – first as resistance and then as support. It is followed by 1.2415, which supported GBP/USD in late September. 1.2505 and the cycle high of 1.2580 are next. 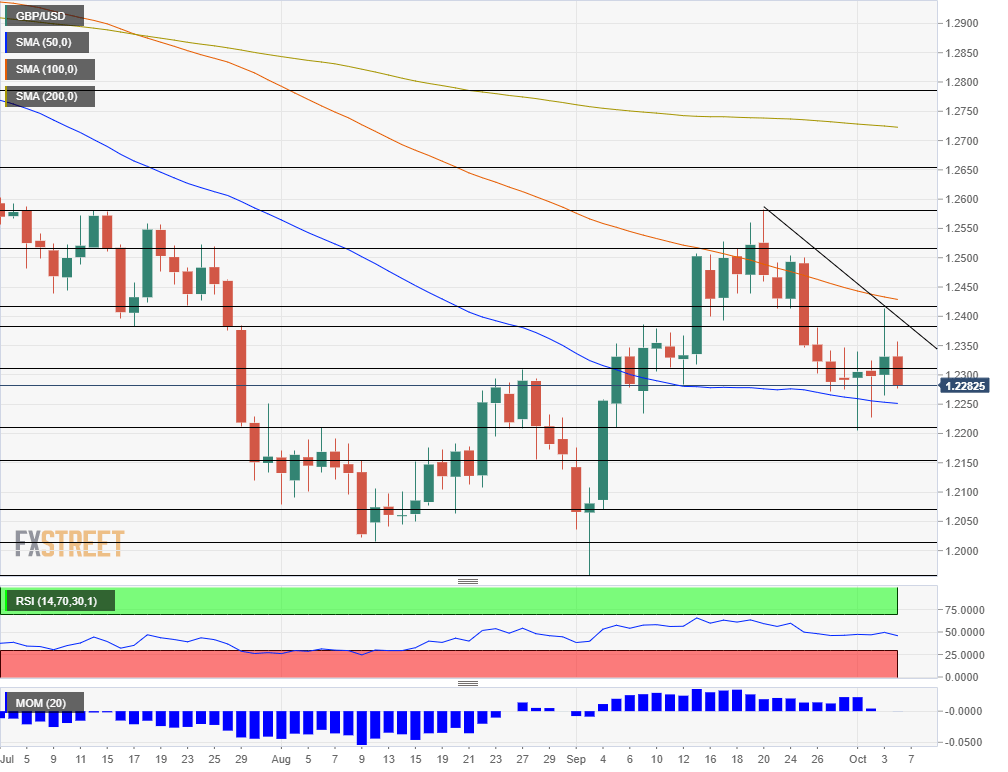 A Brexit accord may have to wait until the last moment, which is the EU Summit on October 17. The lack of progress may weigh on the pound in the upcoming week. Other reasonable scenarios are that Johnson strikes a deal but fails to receive support, and a move to oust him, which may also wait for the following week. All in all, the chances of a fall are higher than for the rise.

The FXStreet Poll is showing a neutral trend in the short run and substantial fall afterward. Do experts foresee a hard Brexit?  The short-term average target has been upgraded while the medium and long-term ones are little changed. 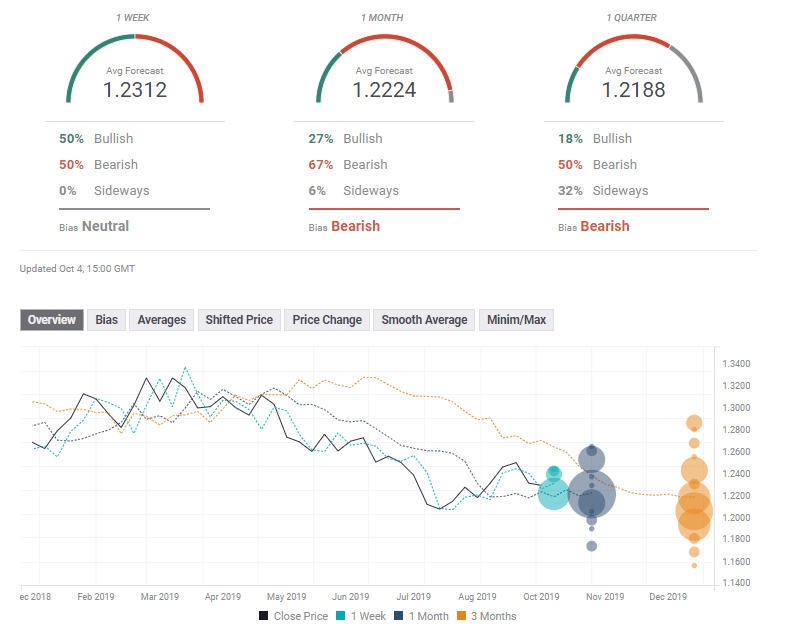 Get the 5 most predictable currency pairs
Previous ArticleNY Fed’s GDP Nowcast stayed unchanged at 2% for Q3, dropped to 1.3% for Q4
Next Article Safe-haven yen has more room to run on ongoing global downturn