Weed stocks have been suffering from a hangover at the beginning of the last week of November. Cannabis shares have been struggling with profit-taking after hopes for legalizing marijuana on the federal level in the US had sent equities higher.

Another reason for the slump stems from Aurora’s financials, which have been weighing on the broader sector.

Aurora (ACB) has moved forward with its plans for convertible debt swap after 99% of noteholders opted for the early conversion that was due only in March. The Edmonton-based company sent shivers through investors’ spines by allowing bondholders to receive the firm’s stock at a discount.

Nevertheless, the financial action taken by Aurora is still considerably dilutive, but the Canadian company may have had no choice amid growing economic strains. 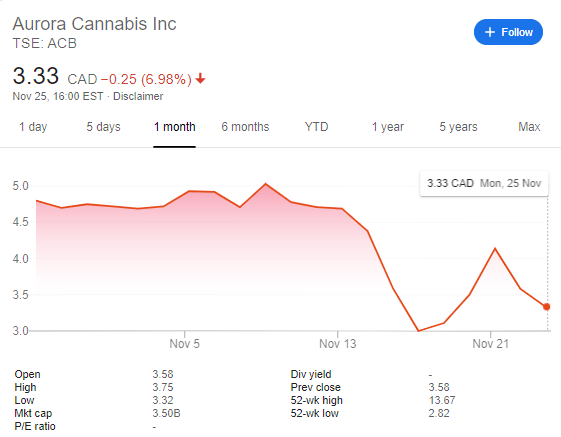 While share prices were generally lower, Canopy Growth Corporation (CGC) has weathered the storm, consolidating the gains. The Smith Falls, Ontario based company has announced that it is expanding from the traditional flower and oil products and into beverages.

Health Canada has granted a license for a new drinks facility at Canopy’s headquarters. Constellation Brands, which makes Corona beer and holds a stake in CGC, has provided technical support. 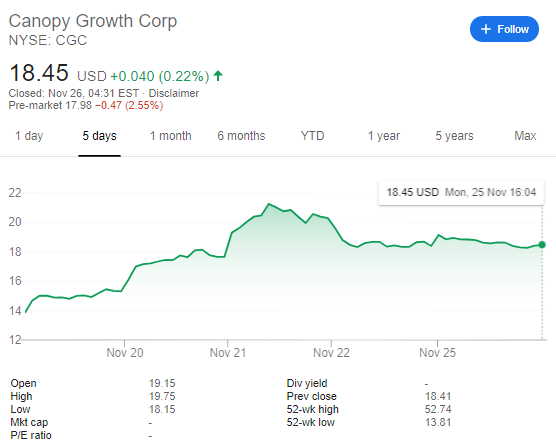 Aurora has been dragging down prices of most of the sector, including a company based in Aurora, Colorado. New Age Beverages Corp (NBEV) has been experiencing a slow grind to the downside since the middle of the year when the NASDAQ-traded share kicked off its painful losing streak.

It is trading at the $2 handle, down to levels last seen in September 2018, before it surged all the way to $7.79.  Similar to Canopy (CGC), the firm makes cannabis-infused beverages, a growing sector. However, recent financials have failed to impress.

The downfall in earnings and the miss in revenues have been weighing on the stock in recent days.  However, gauges of implied volatility and options markets reflect a potential for substantial movements.

NBEV bulls may be hoping that this new volatility may provide the much-needed upswing. 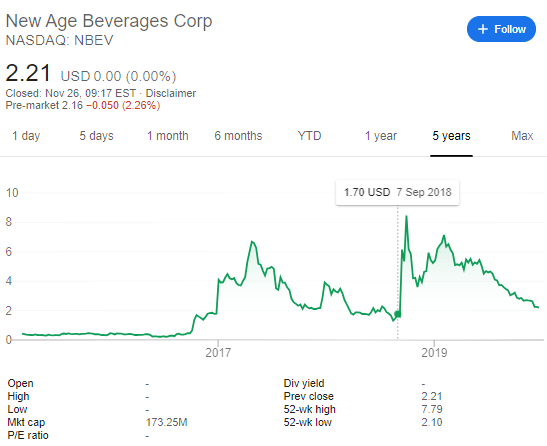 The US black market continues to dog the profitability of legitimate sales. Some industry experts fear a cycle of defaults for legal cannabis due to fierce competition in the illegal market.

While the number of states that are enabling pot sales and consumption has been on the rise, marijuana remains outside the law for many Americans. That keeps off-the-radar growers and consumers in business, creating impediments for the adoption.

The US House of Representatives took a significant step forward by promoting the legalization on the federal level. Still, the Senate is set to slow-walk the process in the best-case scenario. Mitch McConnell, the Senate majority leader, is a life-long opponent of any form of decriminalizing any sort of drug.

Canadian cannabis firm has been facing hurdles also in its domestic market – which remains limited in comparison to the US – amid a slow rollout.

Nevertheless, many investors remain bullish about the sector chances to reach higher ground as companies mature, Canada becomes comfortable with its new status, and the US advances in its long path to full legalization. New Zealand is set to allow pot sales in 2020, also expanding the market.

ACB's stock price has been dogged by financial issues again. Canopy's shares are well bid after it announced a new cannabis-based drink. New Age Beverages Corp. has been struggling despite expectations for higher volatility.   Weed stocks have been suffering from a hangover at the beginning of the last week of November. Cannabis shares have been struggling with profit-taking after hopes for legalizing marijuana on the federal level in the US had sent equities higher.   Another reason for the slump stems from Aurora's financials, which have been weighing on the broader sector.   Aurora Cannabis Inc. stock Price Aurora…