The United States Commodity Futures Trading Commission (CFTC) will permit fintech firm Tassat to proceed with its Bitcoin swap contracts after failing to meet the regulatory requirements. As per an official statement by the CFTC’s Division of Market Oversight (DMO), the financial watchdog will not stop Tassat from launching a swap execution facility (SEF) later in 2020.

An excerpt from the statement reads:

DMO will not recommend the CFTC commence an enforcement action against Tassat for failing to reinstate its SEF registration.

In November, Tassat applied to become a regulated cryptocurrency derivatives exchange with the CFTC. Following this, the fintech firm failed to launch its swaps exchange by August 1, causing the regulatory body to label it as “dormant.” Reportedly, Tassat has claimed that the oversight was due to delays caused by the COVID-19 pandemic. It has also requested to be exempted from applying to reinstate its status as a SEF.

The CFTC’s decision exempts Tassat from the reinstatement requirements and brings it closer to launching a cryptocurrency derivatives exchange with complete regulatory oversight. The fintech firm also hopes to list physically-delivered BTC derivatives for institutional investors by the end of 2020.

In a recent podcast with Anthony Pompliano, Jim Cramer, the host of CNBC’s Mad Money, said that he might invest 1% of Bitcoin’s net worth. He compared the flagship coin to gold and cited the importance of hedging against inflation.

Most investors consider safe-haven assets like gold as the go-to hedge against inflation and generally do not expect significant returns. Cramer said he is drawn to BTC because of its demonstrated ability to surge in value while also acting as an inflation hedge.

I mean people talk about like crypto gets hacked or whatever, you know what’s really bad? It’s when your kids can’t find your gold. And that is, by the way, not unusual. So this is why I am fixated on needing to own crypto, because I fear a massive amount of inflation, and I don’t have [any]. Gold will do okay, the houses will do okay, those will keep me running in place. The idea of actually making money, well holy cow, I’ll take a shot at that with 1%.

Additionally, Cramer expressed his concerns about the storage of gold. According to him, gold is dangerous for kids to hold, which makes Bitcoin more attractive. He added that gold is risky because “it can get stolen” and “they don’t want to take it out of the bank.”

Cramer is not the only one considering opening a long position in Bitcoin. Major firms and high-profile investors are increasingly investing in Bitcoin because it acts as an inflation hedge and also has portability. MicroStrategy CEO Michael Saylor said the firm now holds 38,250 BTC.

OKEx cryptocurrency exchange recently worked with blockchain firm Catallact to study the behavior of large-scale investors this year. According to the report published by them, the number of 5,000 to 10,000 BTC transactions surged while Bitcoin’s price consolidated around $10,000 (between May and July).

This upward trend suggests the possibility that institutions and/or large players got busy accumulating BTC as economic stimulus measures from central banks spurred on the purchase of hard assets. However, because we cannot cleanly differentiate what actual activity took place from the number of transactions alone, this only remains a speculative possibility.

OKEx offers two reasons that would explain the surge in whale activity. According to the first explanation, one or more cryptocurrency exchanges were engaged in moving coins into many wallets for security reasons. The exchange also speculates that large institutional entities and whales gathered substantial amounts of BTC as it hovered around $10,000, assuming that the coin’s price would subsequently rise or fall.

OKEx added that the theory in which whales were busy accumulating BTC aligns with the narrative that institutional players like Paul Tudor Jones invested in Bitcoin as a hedge against inflation.

The possibility that big-money players and institutions accumulated BTC [between May to July]can also be seen when we examine the percentage of total BTC transactions that are of 100 BTC or more. These data clearly show not only the deviation from the COVID-related crash in March but also a deviation from mid-June until August – highlighting the possibility that whales took this time to accumulate in the expectation that prices would increase.

The report also shows how the first few months of the pandemic impacted how people moved within the market. In particular, while retail investors pulled back to await prices going back to normal again, large investors “bought the dip” and began accumulating BTC. 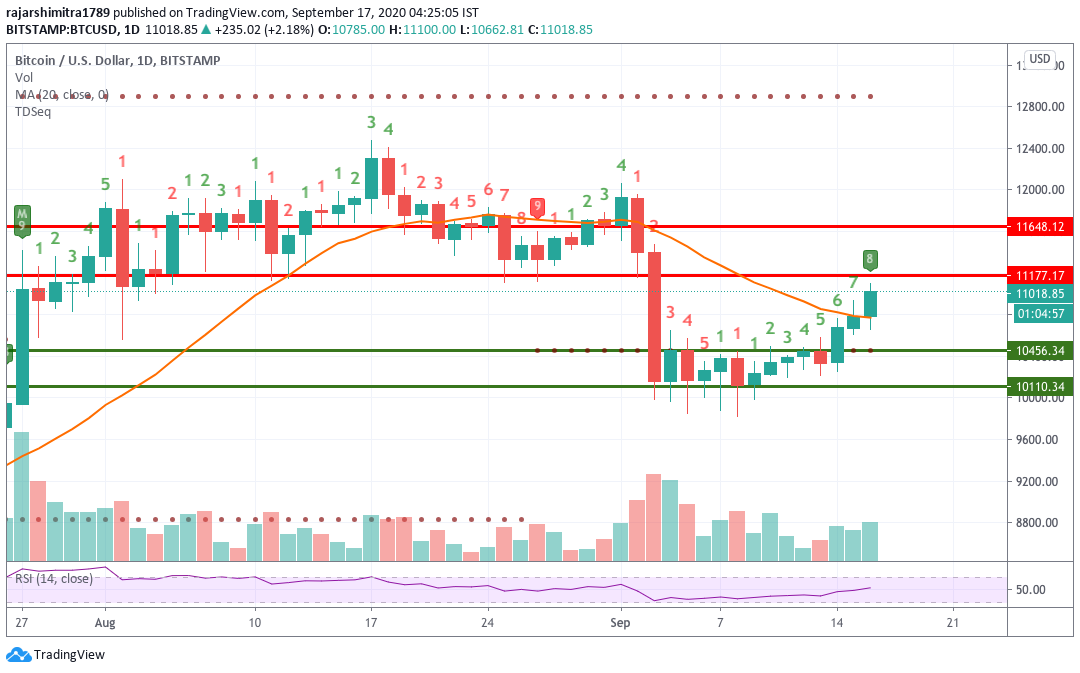 BTC has crossed above the $11,000 mark after charting three straight bullish days. The price may go up to the $11,175 resistance line before TD reverses the current upward trend. Over the last three days, BTC went up from $10,345 to $11,015. The RSI is hovering around the neutral zone, so BTC still has more room for growth before BTC gets overpriced.

As per the IOMAP, the price may go up to $11,355 before the price encounters the first strong resistance level. On the downside, the price has space to drop to $10,675 before it meets another healthy support level. 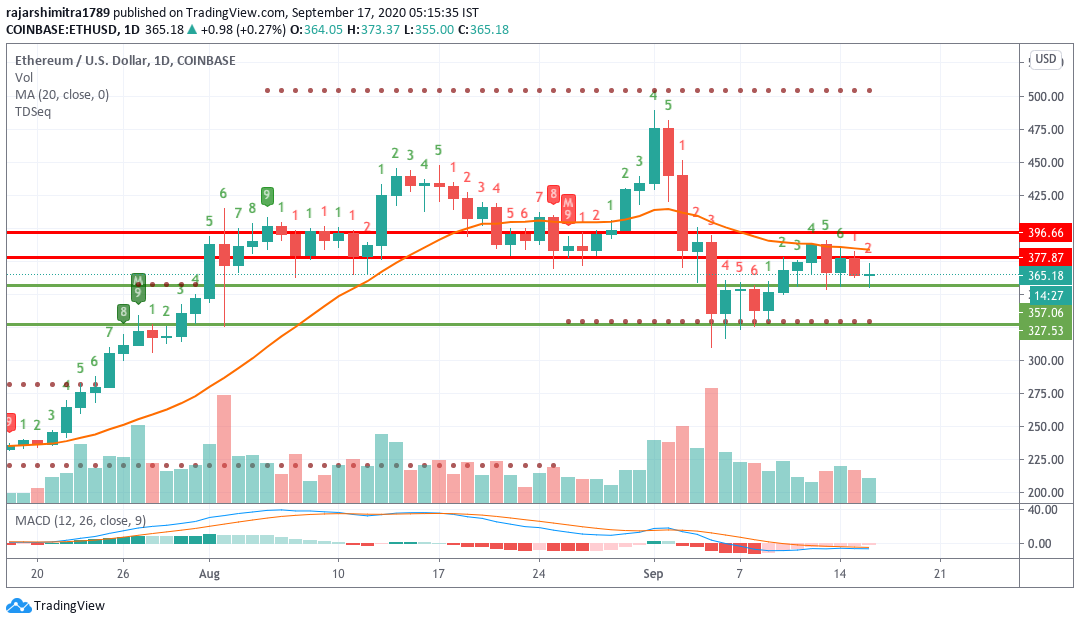 ETH/USD dropped from $389.25 to $364.50 in the last five days. The latest candlestick is labeled the “red TD-2.” This shows that ETH is currently on a downward trend, so further price drop is expected. The buyers have to defend the $355 support level to prevent further downward movement. The MACD shows that market momentum has reversed from bearish to bullish.

ETH is sitting up strong resistance levels, so upward movement is currently stifled. On the downside, the price may drop to $335 before it meets healthy support.

A famous digital asset analyst who goes by the name “CryptoWhale” said that XRP is the only cryptocurrency pushing for greater regulations. In a recent tweet, they noted that the coin will skyrocket following the addition of market regulations and will eventually “annihilate” competing assets.

Furthermore, CryptoWhale added that governments prefer the “transparency” of XRP and lauded the efforts of Ripple (XRP’s parent company) for establishing real-world partnerships instead of chasing retail investors.

The analyst also noted that they’ve actively invested in XRP since 2013 and plan on increasing their exposure after a correction in the Bitcoin and altcoin market. CryptoWhale also detailed their reasoning for investing in XRP. They said that XRP is “x1000” faster and cheaper than Bitcoin. 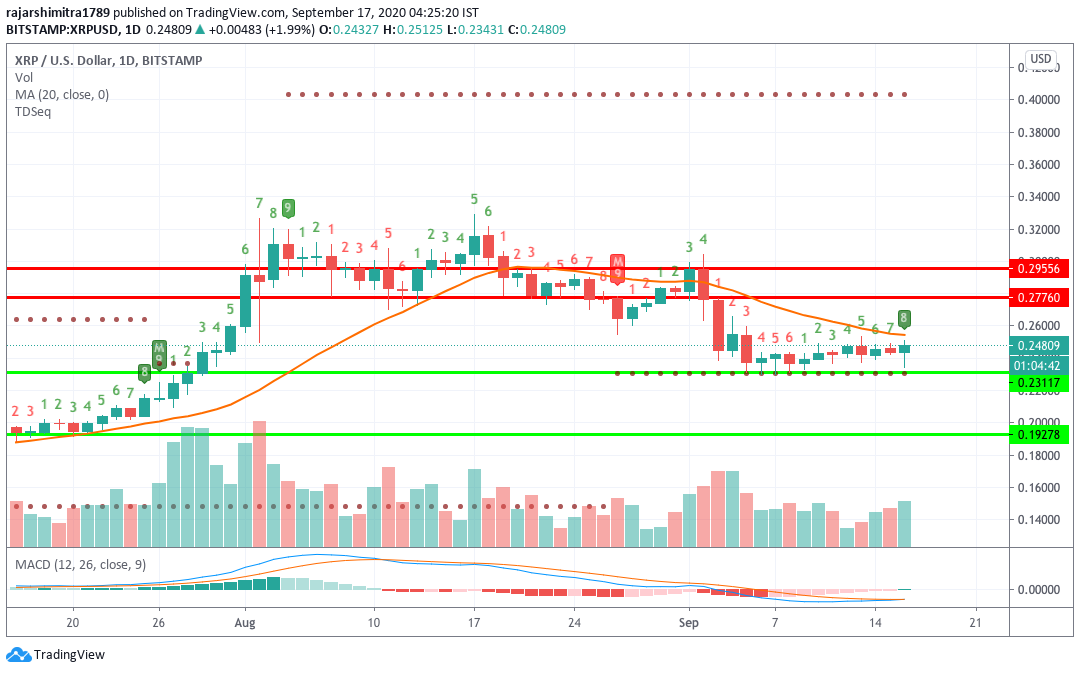 XRP has been moving along sluggishly over the last 12 days as the price crept up from $0.237 to $0.248. The MACD has reversed from bearish to bullish, but it looks like the buyers won’t have enough momentum to break above the SMA 50 resistance any time soon

USD/JPY seesaws around monthly low ahead of BOJ

Analysis shows a spike in the number of 5,000 to 10,000 BTC transactions between May and July.  Analyst CryptoWhale said that XRP is the only asset pushing for greater regulation.  Bitcoin CFTC permits Tassat to proceed with BTC swap contracts   The United States Commodity Futures Trading Commission (CFTC) will permit fintech firm Tassat to proceed with its Bitcoin swap contracts after failing to meet the regulatory requirements. As per an official statement by the CFTC’s Division of Market Oversight (DMO), the financial watchdog will not stop Tassat from launching a swap execution facility (SEF) later in 2020.  An excerpt from…