Correlation between gold and BTC reaches a one-year high 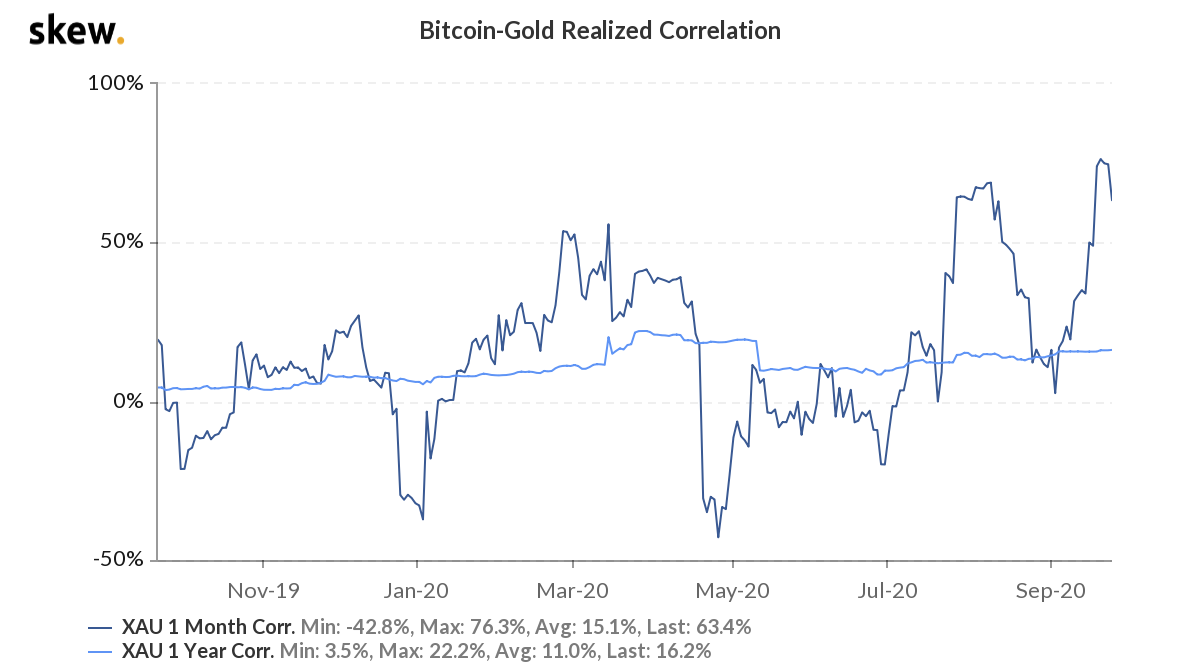 Gold has historically been perceived as a safe-haven asset and a go-to store of value in a fight against inflation. Amidst the economic fallout caused by the pandemic, the demand for safe-haven assets has continued to surge. As a result, gold’s value has consistently increased, outperforming many traditional assets this year.

The uptrend between Bitcoin and gold is a positive sign for BTC. The correlation between the coin and gold has caused an improvement in the sentiment around BTC from institutions. According to an earlier FXStreet report, business intelligence firm MicroStrategy purchased $425 million worth Bitcoin.

As per a U.Today report, Tyler Winklevoss, the co-founder of Gemini, argued that BTC could eventually outcompete gold.

It’s true that gold has a multi-millenia head start and strong foundation of trust. As a result, it may be the right short to medium-term choice for risk-averse types. After all, Bitcoin is still young and therefore carries both significant technological risks as well political risk in certain jurisdictions. Nonetheless, we believe that bitcoin will continue to cannibalize gold and that this story will play out dramatically over the next decade.

Many decentralized finance (DeFi) coins have been undergoing substantial corrections in recent times. Industry analysts believe that this could result in a correction in Bitcoin. One of the notable DeFi projects, Yearn.finance (YFI), has slid over 35% from its earlier all-time highs. Coins like Aave’s LEND and Synthetix’s SNX have also dropped in the past few days as selling pressure mounts after a parabolic rally.

Analysts seem to think that the weakness in DeFi may not reflect well for BTC and other top digital assets. According to a Bitcoinist report, a trader said:

$YFI tanking a little, used is as a proxy for DEFI in general since it’s the billion+$ cap and OG coin. Tend to think DEFI doing bad is not good for $BTC since it’s a sphere which brought big investments into $Crypto past months. Would keep an eye, on $ETH as well, get a vibe.

From an investment point of view, BTC pre-2013 and ETH pre-2015 were once-in-a-lifetime asymmetric bets. DeFi pre-2021 is once-in-a-decade IMO (until proven wrong). If you’ve missed the first two don’t miss the latter.

BTC has bounced up from the $10,415 support line following two straight bearish days and bounced up to $10,511.30. Currently, the price has encountered resistance at the SMA 20 curve. The 20-day Bollinger band has been squeezing since 13th September. Squeezes are indicative of low volatility periods and are usually succeeded by significant price movements. The longer the squeeze, the higher the probability of a strong breakout.

So, as of now, it looks like the price will trend horizontally as BTC enters a period of consolidation. The IOMAP further corroborates this.

IntoTheBlock’s “In/Out of the Money Around Price” (IOMAP) model estimates that BTC is sandwiched between strong resistance and support levels. On the upside, the premier cryptocurrency faces a strong resistance wall at $10,650, where a little over 960,000 addresses had purchased around 875,000 BTC.

On the downside, BTC has a healthy support wall at $10,365, where around a million addresses had bought 556,000 BTC. As such, further price movement in any direction may be limited.

Ethereum (ETH) balance on online exchanges has recently dropped to a nine-month low, according to blockchain analytics firm Glassnode. Additionally, the number of ETH wallets and other on-chain fundamentals have also plummeted.

According to another tweet by Glassnode, the amount of ETH wallets where users store 1,000 ETH or more has seen a significant two-year drop.

The smart contract market leader’s mean transaction volume has also decreased substantially in recent times. Despite the adverse reports mentioned above, Glassnode also shared some good news about ETH. The number of non-zero ETH wallets has increased to a new all-time high of 47,185,555.

Furthermore, the number of ETH wired to cryptocurrency exchanges has surged in the past few days. However, since ETH exchange balances are declining, users may be sending their ETH to DeFi and locking them in smart contracts for yield farming.

ETH/USD has formed a head-and-shoulders pattern, with the price going up from $340.35 to $343.15 this Tuesday. This pattern is a formation that appears as a baseline with three peaks, the outside two are close in height and the middle is highest. This usually predicts a bullish-to-bearish trend reversal.

Going by the pattern, the price will probably break below the $337 support line and drop to $320. The relative strength index (RSI) is trending around the neutral zone, so the bears have plenty of space to take control.

ETH is sitting on top of moderate and weak support walls. The immediate support wall is at $337.50 where 427k addresses have bought a little over 1.4 million ETH. The bears will conquer this level with ease. Following that, the drop in price could be catastrophic. The next moderate support level is all the way down at $295.

However, on the flip side, there is some upside potential if the buyers somehow take back control. The price is sitting below weak resistance at $348, which has around 225k addresses with around 690k ETH. Following that, there is a moderate resistance wall at $358.

Santiment’s age consumed is a helpful metric that helps us know if the price is going to experience any sharp movement or not. The trend could be either positive or negative. Less than 48 hours ago, a sharp spike in the age consumed chart saw the price go down.

Sanbase’s on-chain metric shows that the price and development activity patterns are following each other too closely. There was a sharp decline in dev activity on 21st September, which triggered a sharp drop in price as well. Since then, both the charts have been pretty much neck and neck.

XRP all set to enter its bull rally – Analyst

A well-known analyst who goes by the name “Credible Crypto” said that XRP is set to enter its long-awaited bull rally.

While the analyst is bullish on XRP, they opine that both Ethereum (ETC) and Bitcoin (BTC) have more downside potential. Crypto Credible believes that BTC will drop below $10,000 before it breaks a critical resistance level.

The analyst is also keeping close tabs on the ETH/BTC pair as it approaches the price target that they had predicted.

The RSI is trending right at the edge of the oversold zone. As such, the price may dip a bit more before the buyers step in to correct the price. Technical analysis shows us that the cross-border payment coin may drop further to the $0.22 support line before it experiences a reversal in fortunes.

As per Sanbase, there has been a sharp spike in the age consumed chart this Tuesday. This spike caused an immediate climb in price, which was followed by a quick drop. It will be interesting to see the final price trend that gets triggered by this spike. According to what we learned before, this will probably be a bearish trend, which pushes the price into the undervalued zone.