Although the entire cryptocurrency market suffered a slight correction in the past 48 hours, some coins have suffered more significant losses. The total market capitalization dropped from $370 billion to $361 billion due to the increased strength of the U.S. dollar, which is inversely correlated with the crypto market. 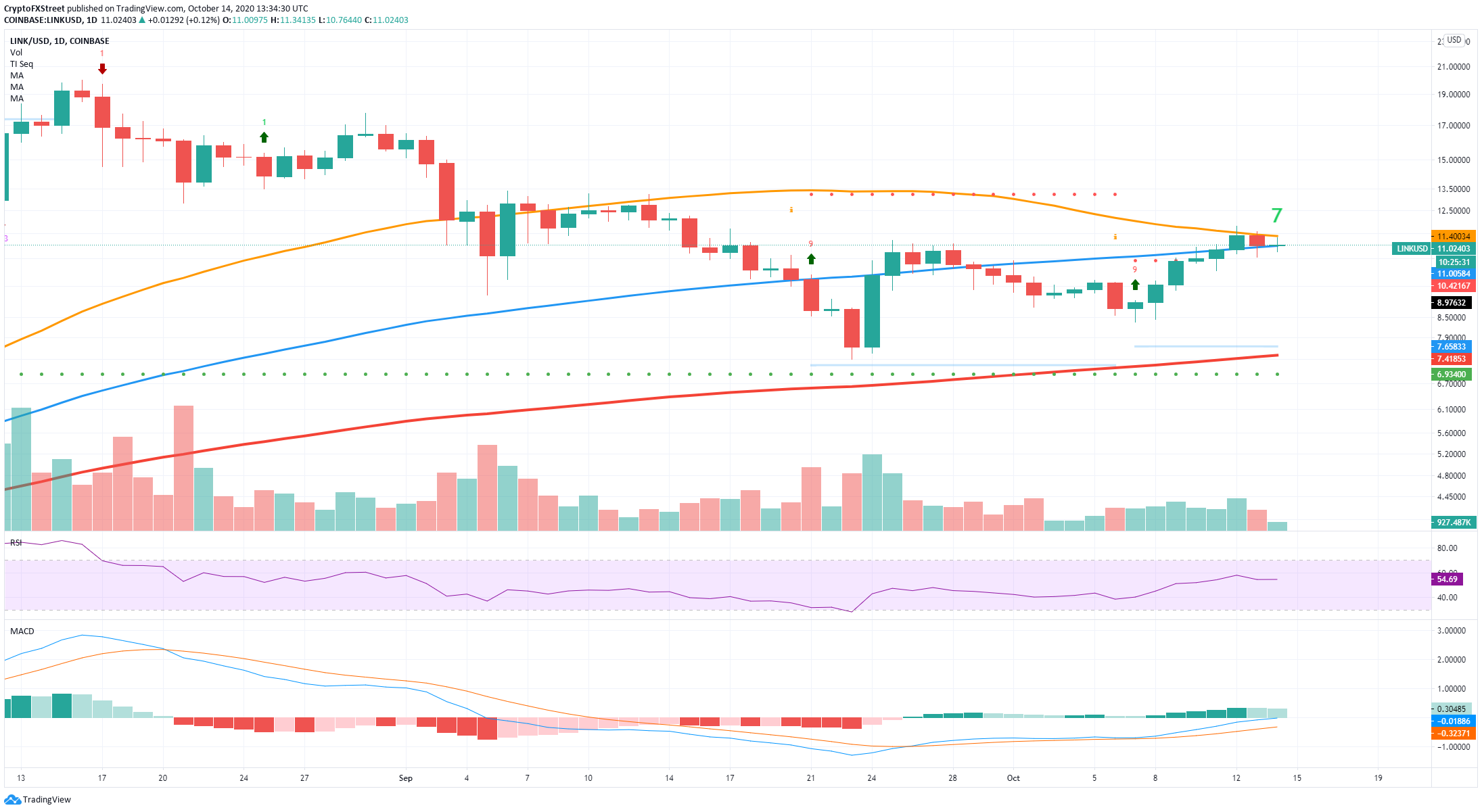 The TD sequential indicator has presented a ‘7’ green signal, which is usually indicative that a sell signal is coming soon. A breakout below the 50-SMA at $11 would push LINK down to $10.5 and then towards $8.4 if it breaks as there are no other support levels on the way down.

The In/Out of the Money Around Price chart by IntoTheBlock confirms this theory and shows a strong support area between $10.34 and $10.66, where close to 30 million LINK were purchased. The support below or above this point is far lower. 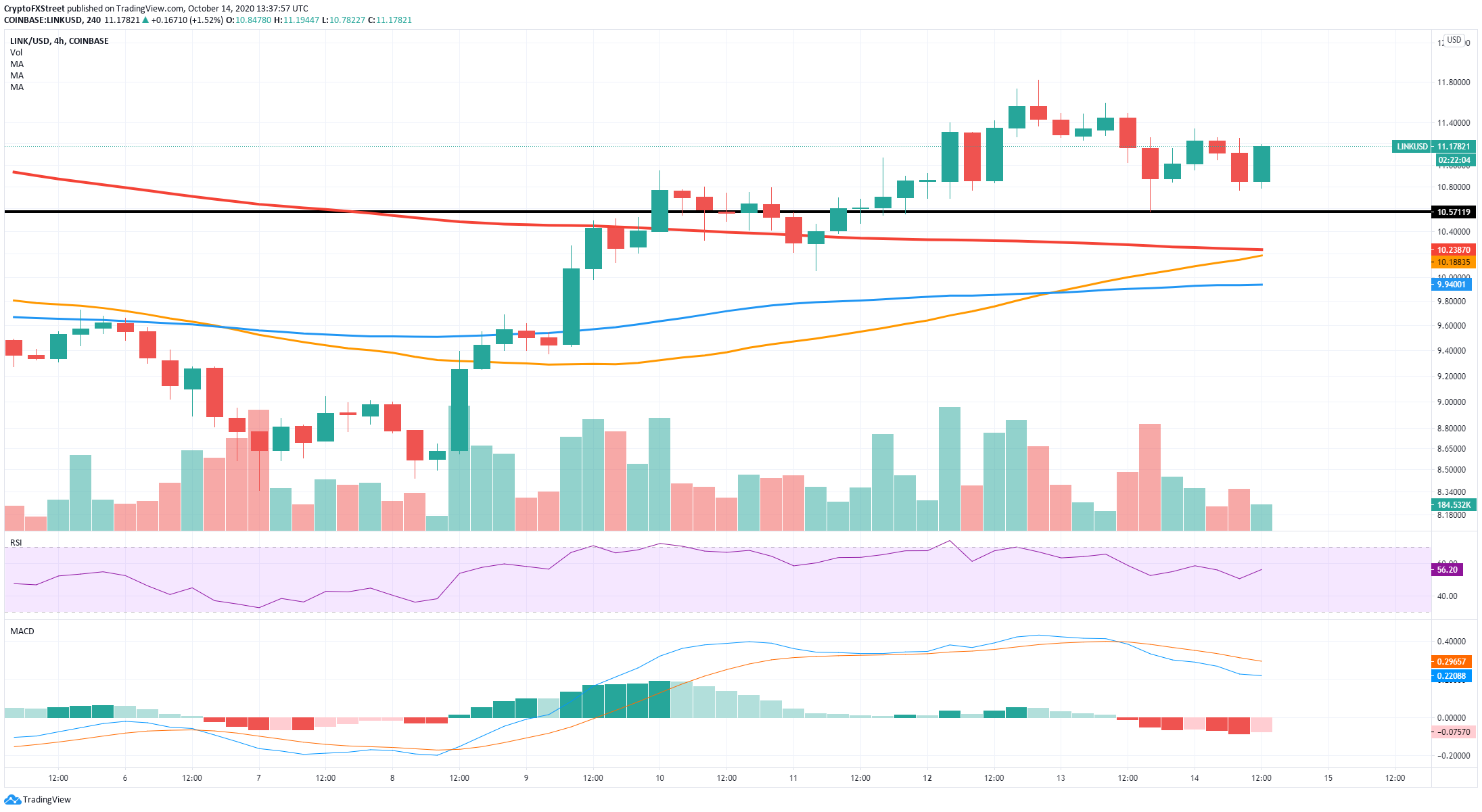 Despite the increased selling pressure, LINK’s price is still far above any of the three SMAs on the 4-hour chart. Additionally, although the digital asset established a lower high, it seems to have created a higher low at $10.76 compared to $11.25.

Furthermore, looking at the same IOMAP chart, resistance towards $12 is far lower than support at $11 and below. The primary resistance area is located between $11 and $11.33, with a volume of 14.78 million LINK. A bullish breakout above this point can push Chainlink towards $12 again.

OMG turns bearish in the short-term

After a great rally towards $4.44 from a low of $2.48, OMG managed to establish a higher low at $3.02 but has failed to create a higher high. Instead, it seems that the digital asset is forming an equilibrium pattern on the daily chart with lower highs and higher lows. 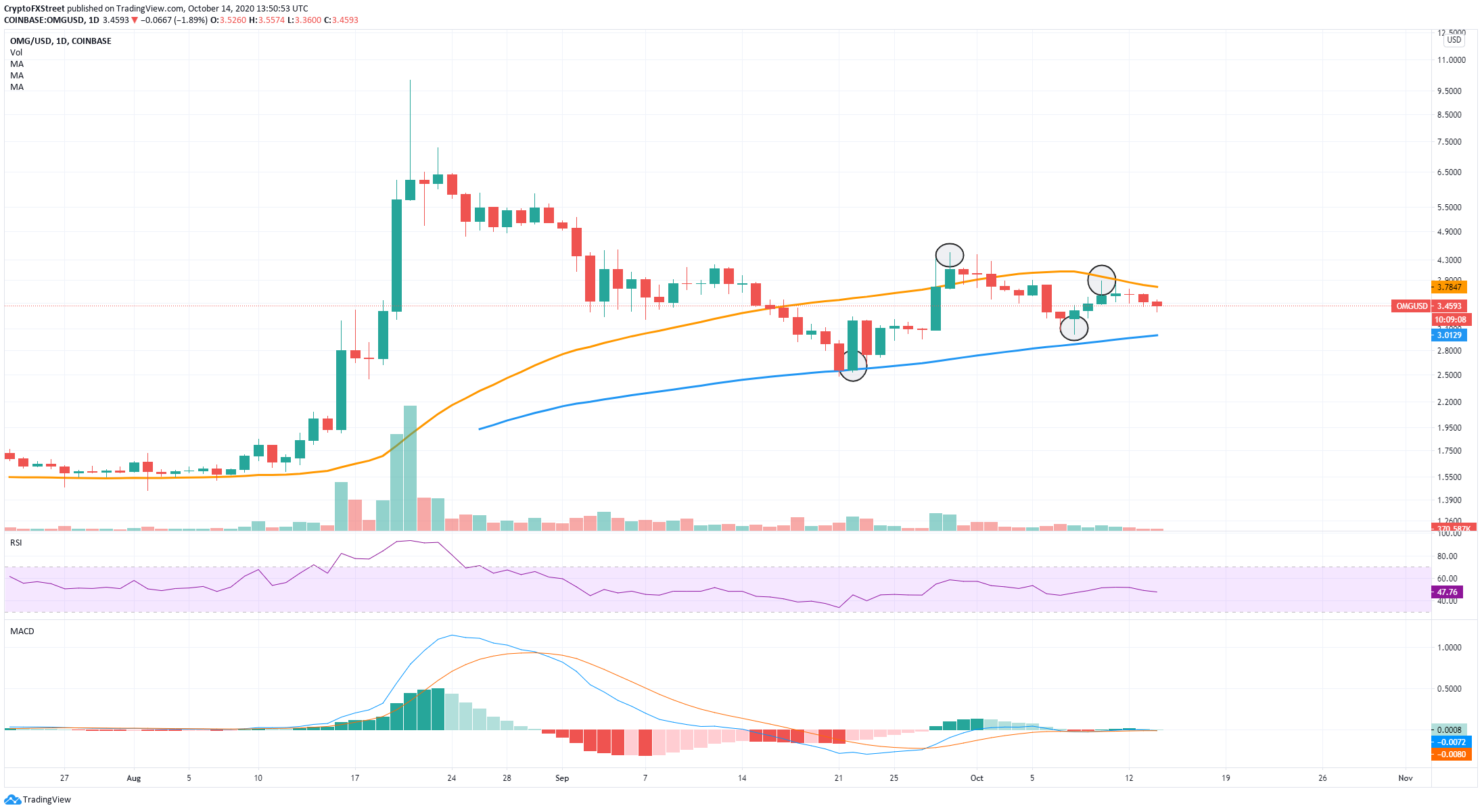 An equilibrium pattern doesn’t necessarily favor anyone; however, the momentum of OMG is shifting in favor of the bears as the MACD is on the verge of a bearish cross for the first time since August 31, which had a significant impact on the price of the digital asset pushing it down 50% within the next few weeks.

If bearish momentum continues, the next target price would be $3, which coincides with the last higher low established and the 100-SMA on the daily chart. The IOMAP chart confirms this theory, showing really small support areas above $3 when compared to the resistance to the upside. 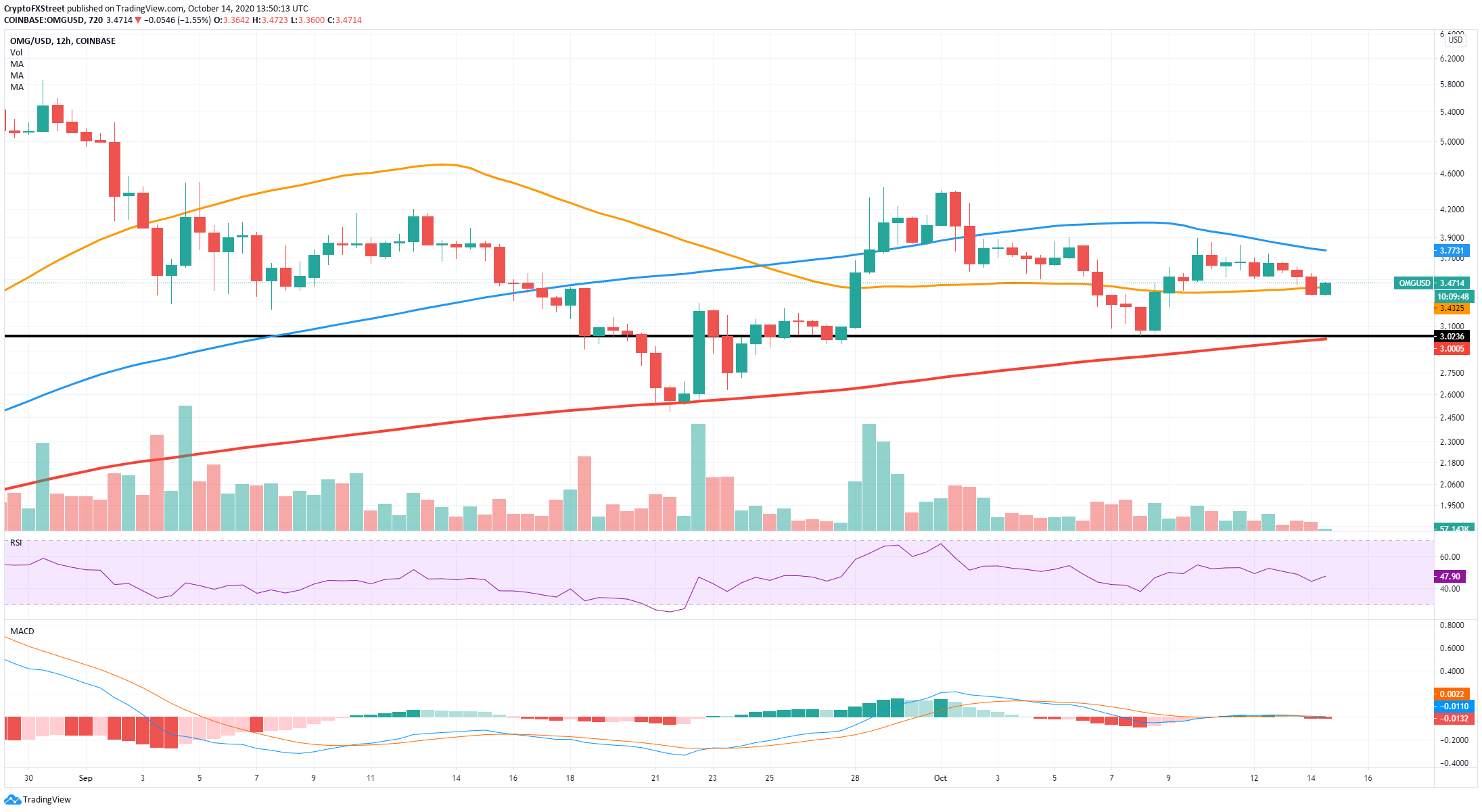 On the 12-hour chart, OMG’s price briefly slipped below the 50-SMA but managed to recover and defend the support level. Bullish continuation above this point can push the digital asset up to the 100-SMA at $3.77 in the short-term.

Additionally, it seems that the number of OMG whales is increasing. The number of Investors holding between 100,000 and 1,000,000 coins rose from 72 on October 6 to 77 currently, indicating that interest in the digital asset is higher.

YFI is down by 16% in the past two days after getting rejected from a critical resistance level on the way up. Several indicators are showing that digital asset might be poised for further correction in the short-term. 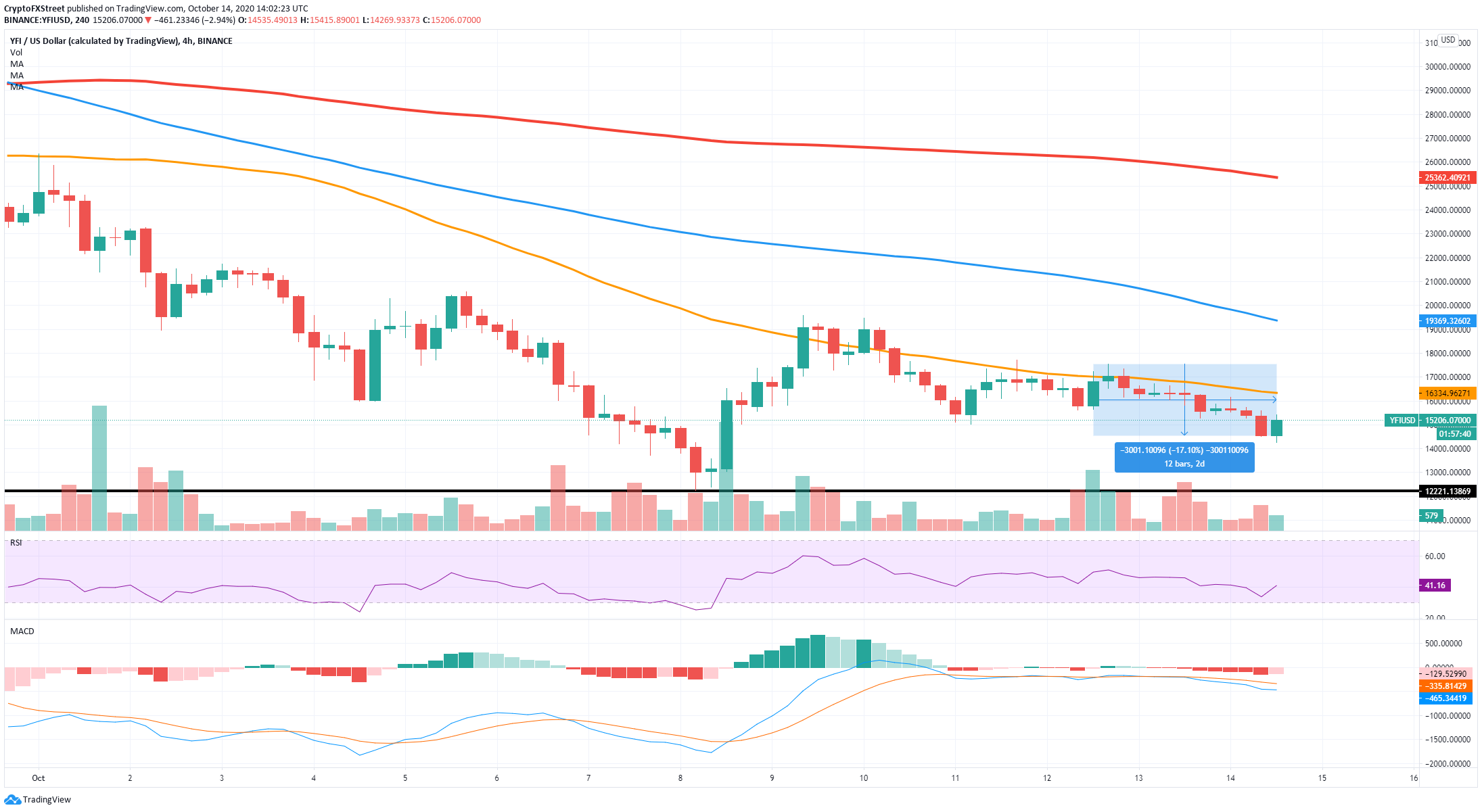 The 50-SMA, currently at $16,335, has been acting as a robust resistance level, rejecting the price of YFi several times from October 9 until now. The MACD turned bearish on October 13 and continues growing in strength, showing no real signs of a recovery.

Another concerning trend for YFI bulls is the decrease in the number of new addresses joining the network. In the past seven days, the percentage is -30%. This drop, combined with the current short-term downtrend, could push YFI down to $12,000. 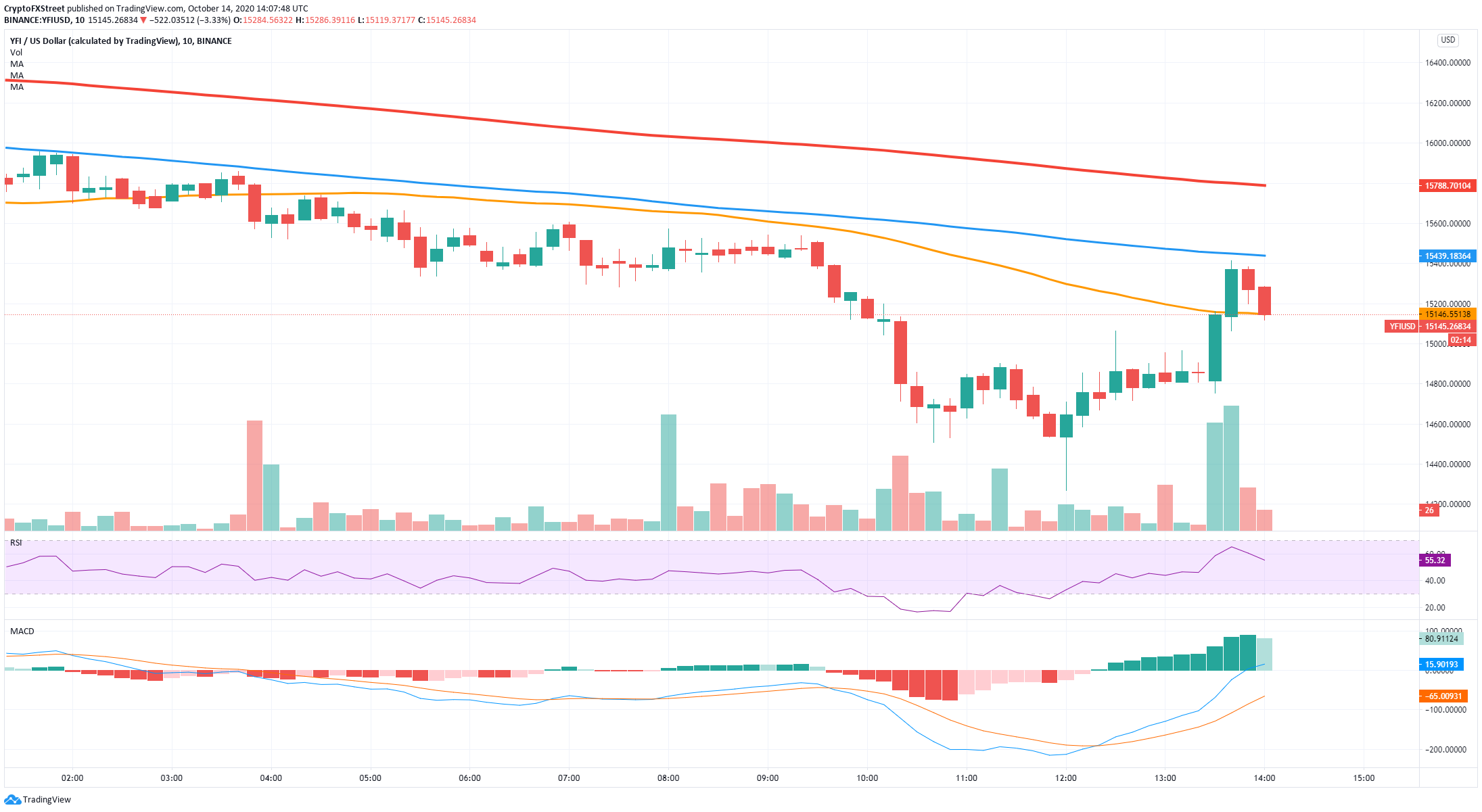 On the other hand, it seems that YFI bulls are coming back on the shorter time-frames like the hourly chart. The price climbed above the 50-SMA, turning into support, and it’s eying up the 100-SMA at $15,439. The MACD turned bullish and rose significantly during the past hour.

We can observe a huge spike in the number of active addresses for YFI, from 8.6% to 39% currently. This ratio represents addresses with a balance that had a transaction during a given period and shows an increase in the interest of YFI. The next two target prices are $15,435 and $15,782.

The breakout of 50-SMA at $11 would push LINK down to $10.5 and then towards $8.4. For OMG, the bearish target price Is $3 right at the 100-SMA on the daily chart if the bearish momentum continues. YFI, on the other hand, is showing signs of potentially correcting further down to $12,000.

LINK has recently topped out at $11.81 and has started a correction period. OMG is down 7% in the past 24 hours and could be looking at more bearish action. YFI continues with its downtrend and fails to recover. Although the entire cryptocurrency market suffered a slight correction in the past 48 hours, some coins have suffered more significant losses. The total market capitalization dropped from $370 billion to $361 billion due to the increased strength of the U.S. dollar, which is inversely correlated with the crypto market. LINK trading between two crucial levels Chainlink is currently trading at $11,…