Latest
You are at:Home»Crypto News»Top 3 Losers Of The Week: HedgeTrade, Yearn.finance, UniSwap – no love found

Towards the second half of the last week, the tide turned in favor of the bulls across the crypto board, indicative of a bullish reversal. The positive momentum crept in tandem with the risk-on market mood across the financial markets, in the face of the improvement in US President Donald Trump’s health condition and optimism over the fiscal stimulus, both of which downed the demand for the greenback.

It’s worth noting that Decentralized finance (DeFi) tokens underperformed over the past week. Among the top 50 widely traded crypto assets, HedgeTrade (HEDG) eroded 16.50% on a weekly basis. UniSwap (UNI) and Yearn.finance lost over 10% and 8.50% respectively of their value.

The least favorite of the top 50 dominantly traded cryptocurrencies, HedgeTrade (HEDG/USD) is looking to extend Saturday’s bounce from ten-month lows of $0.8304 this Sunday. Despite the pullback, the coin loses 16.50% over the week, emerging as the worst performer amongst the lot. 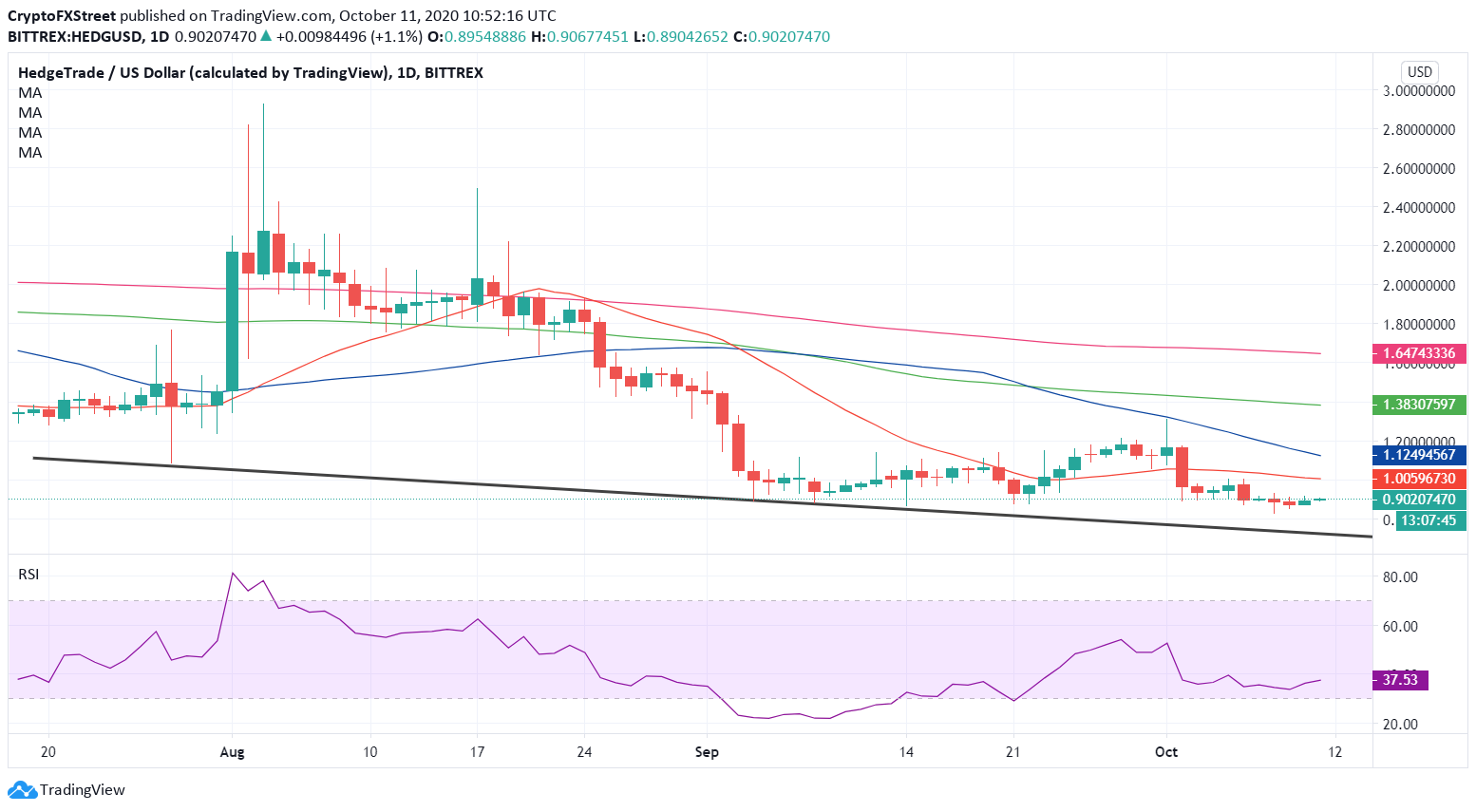 The daily chart shows that the spot is in a bearish consolidation phase before the bears regain control and trigger a fresh drop to test the critical falling trendline support at $0.7262. A breach of the last could pave the way for a free fall.

The 14-day Relative Strength Index (RSI) has bounced off the oversold territory, pointing north at 37.56 while suggesting some room for the recovery. However, the 21-daily moving average (DMA) at $1.0059 is likely to cap the rebound.

UniSwap (UNI/USD) is back in the green zone, resuming its recent recovery momentum, trading above $3.40, as we write. The No. 47 coin reverses Saturday’s temporary reversal but remains on track to book a 10.27% weekly loss while tumbling 6.50% over the last 24 hours.

To the downside, the 21-HMA support at $3.2858 could be tested, below which the ascending trendline support at $3.1956 will be on the sellers’ radars.

Yearn.finance: Not out of the woods yet

Yearn.finance (YFI/USD) ranks third on the list of the top losers of the week, now attempting a tepid bounce from three-day lows of $15,063 reached earlier on Sunday. The bulls are likely to struggle on the road to recovery while the spot erodes 8.55% of its value on a weekly basis. 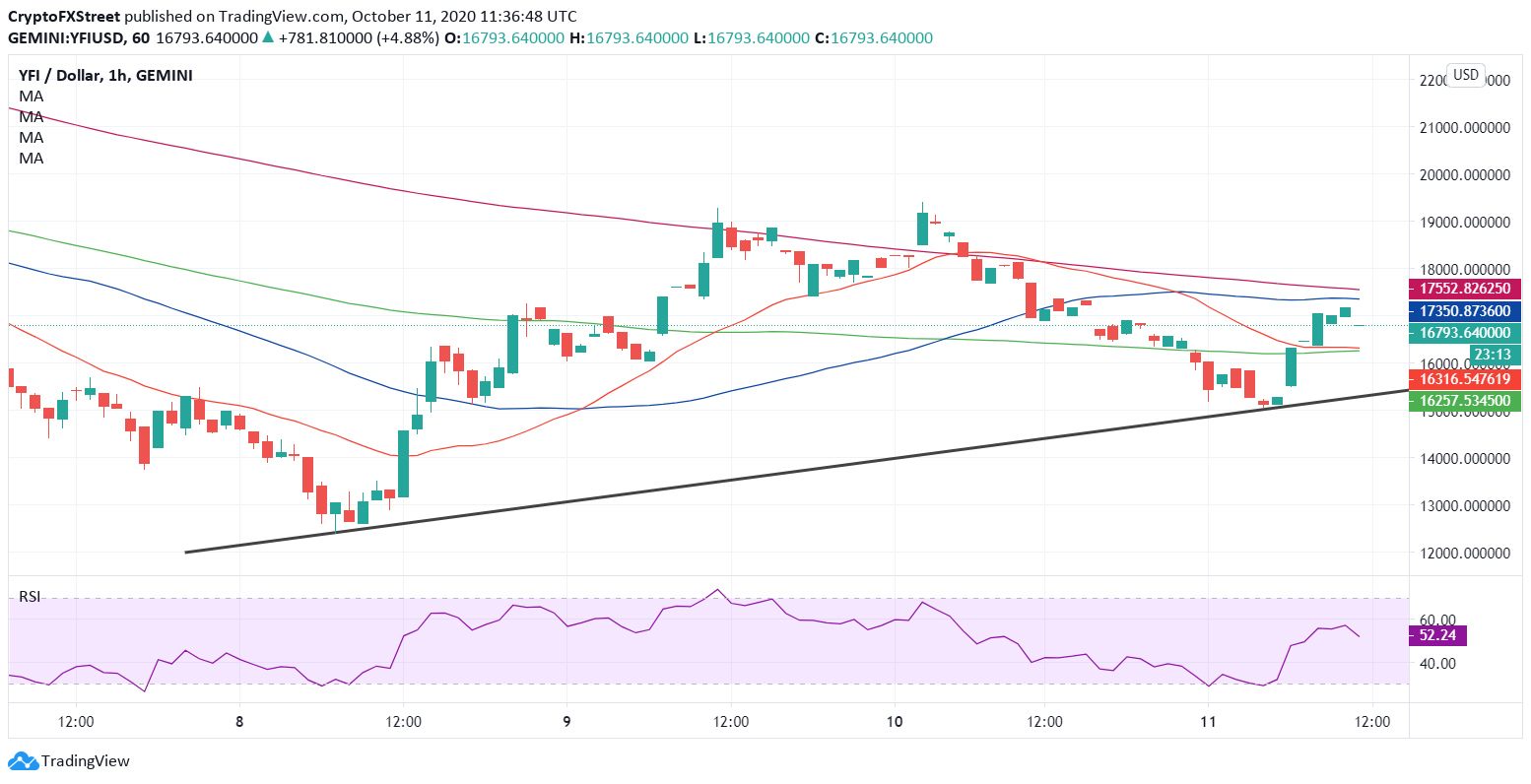 The 35th most favorite coin bounced-off the neckline of a potential round top formation, carved out over the past four days on the hourly chart. The spot is looking to challenge the horizontal 50-hourly moving average (HMA) at $17,350 on the road to recovery. Further north, the 200-HMA barrier at $17,552 will be the level to beat for the bulls.

On the flip side, strong support around $16,300 could offer some reprieve to the YFI buyers. Acceptance below the latter would expose the neckline support once again, now at $15,261. The hourly RSI has turned south and heads towards the midline at 50.00, implying weakening recovery momentum.