Home » Top 3 Price Prediction Bitcoin, Ethereum, Ripple: Bitcoin gets back in the game

Top 3 Price Prediction Bitcoin, Ethereum, Ripple: Bitcoin gets back in the game

This weekend saw one attempt by Bitcoin to break the $11000 barrier by taking advantage of the gap that Ethereum left with its sudden attempt to reach the $400 price level.

If both attempts failed and proved harmless against the US dollar, the effect on the Bitcoin/Ethereum interrelationship charts has not been the same. Bitcoin has significantly benefited and has won half the game in terms of market dominance.

The Bitcoin dominance chart shows three straight days of gains that confirm an upward break from the previous downward trend. 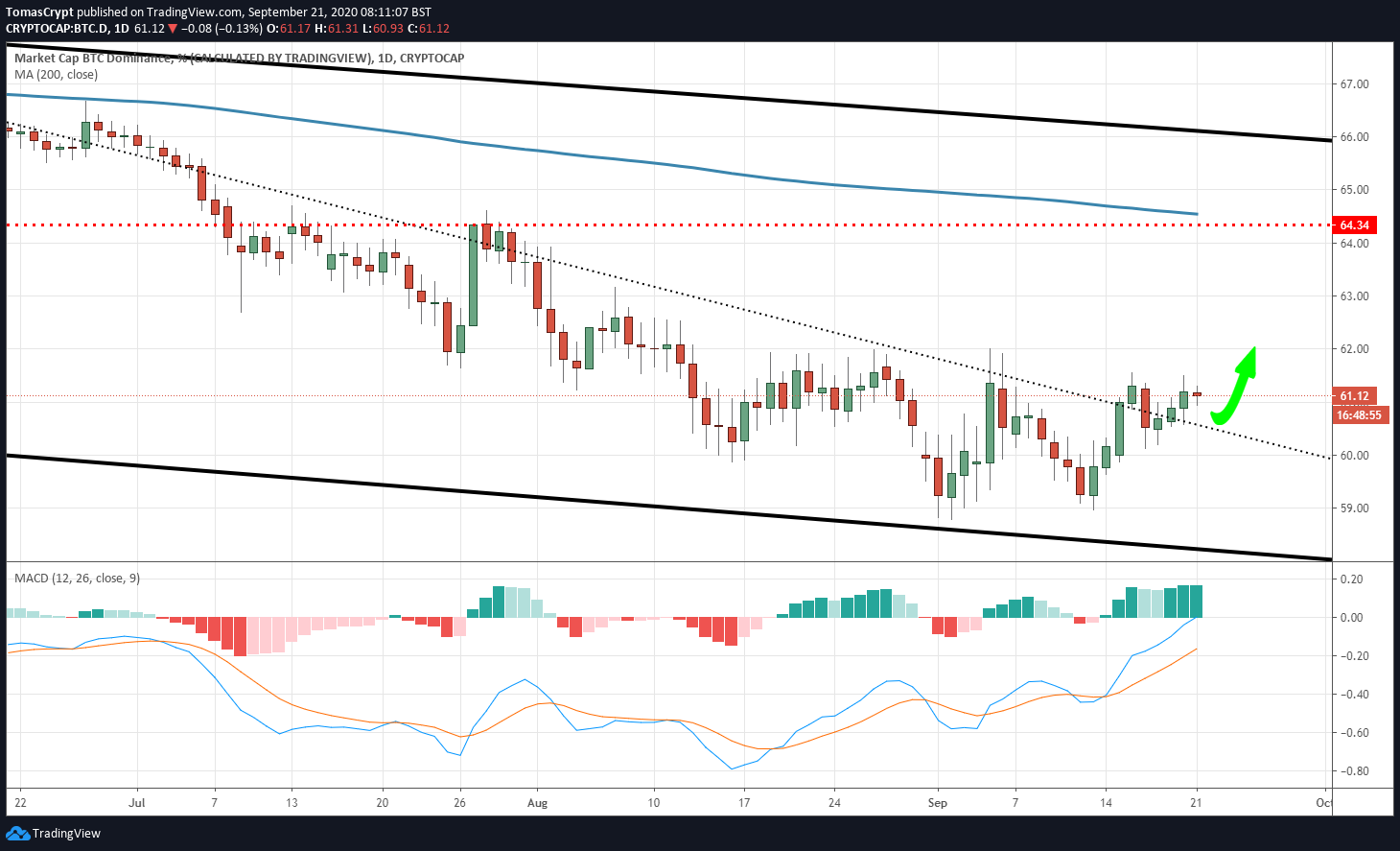 We can now expect the movement to be upward with a medium-term target at the 64% level of dominance, where significant price congestion resistance will soon match the 200-day simple moving average (SMA200).

The MACD indicator presents an aggressively bullish profile, only threatened by the presence of the zero levels that divides the bullish and bearish zones. The process of crossing this level in the MACD is always complicated and can even slow down the movement.

The big question in the short and mid-term is how the increase in Bitcoin’s market share will affect the crypto board as a whole. The two expected scenarios imply that Bitcoin will behave better than the rest of the market. But it is not yet clear whether it will do so with a market moving upwards – optimism on the future of Bitcoin – or with generalised price falls – pessimism towards the future of the Altcoin segment.

The market sentiment level accurately reflects the doubts that exist and is once again below the 50 level. The sentiment index prepared by the site alternative.me remains at the 47 level, pending what may happen in the coming sessions.

The ETH/BTC pair is currently trading at the price level of 0.0341, and for the first time in three sessions is moving upwards. ETH/BTC is following a sequence of decreasing highs, although the support zone is showing strength to hold above the 0.032 level. 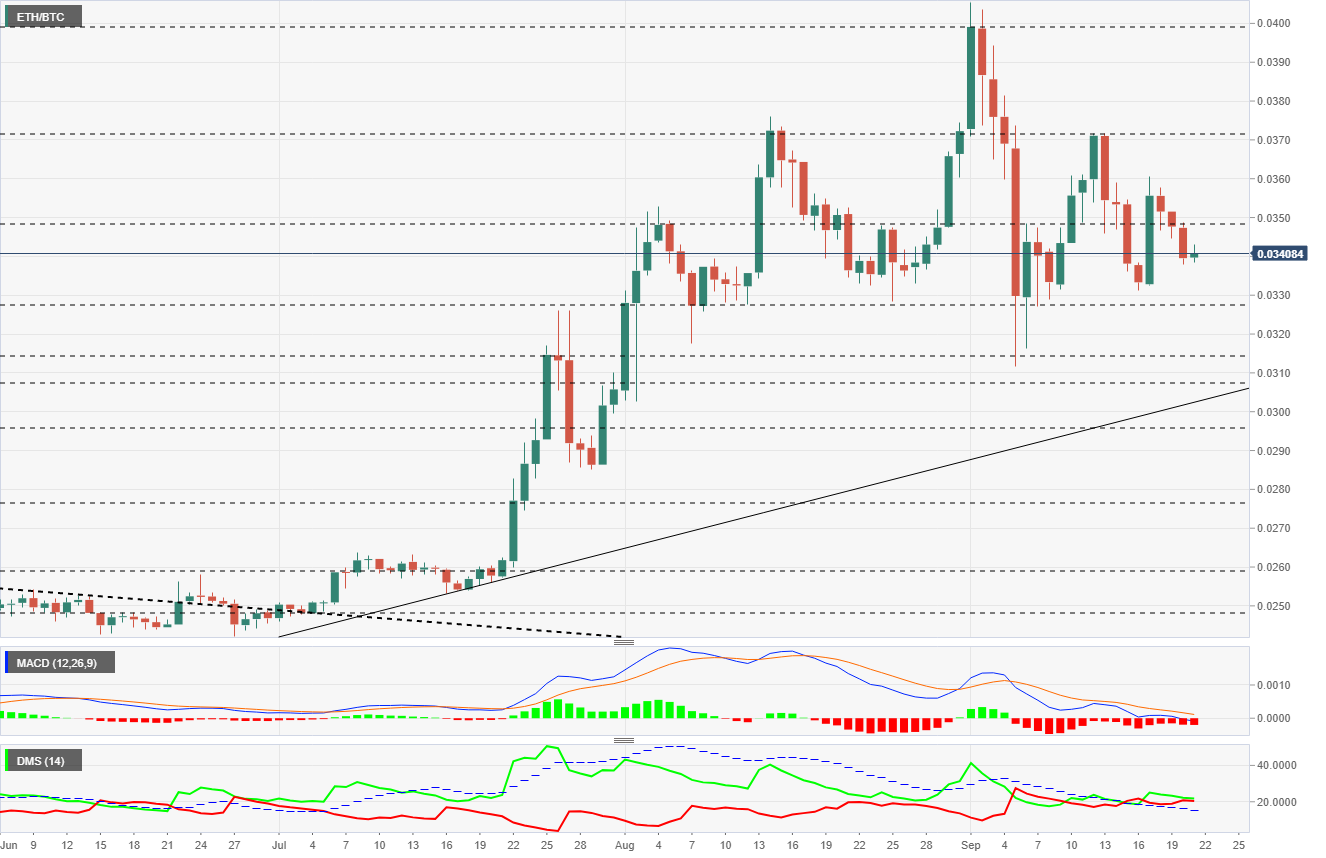 The MACD on the daily chart relies on the indicator’s zero levels for strength to stop the downward trend and return to attack the relative highs at 0.040. A downward breach of this level would mean that the ETH/BTC pair would move quickly towards the 0.031 level.

The DMI on the daily chart shows bulls with a minimal lead over bears. Bears can easily take control and, faced with the position above the ADX line, do so quickly.

The BTC/USD pair is currently trading at the price level of $10926 and remains in the attack zone towards the price congestion resistance level of $11088. 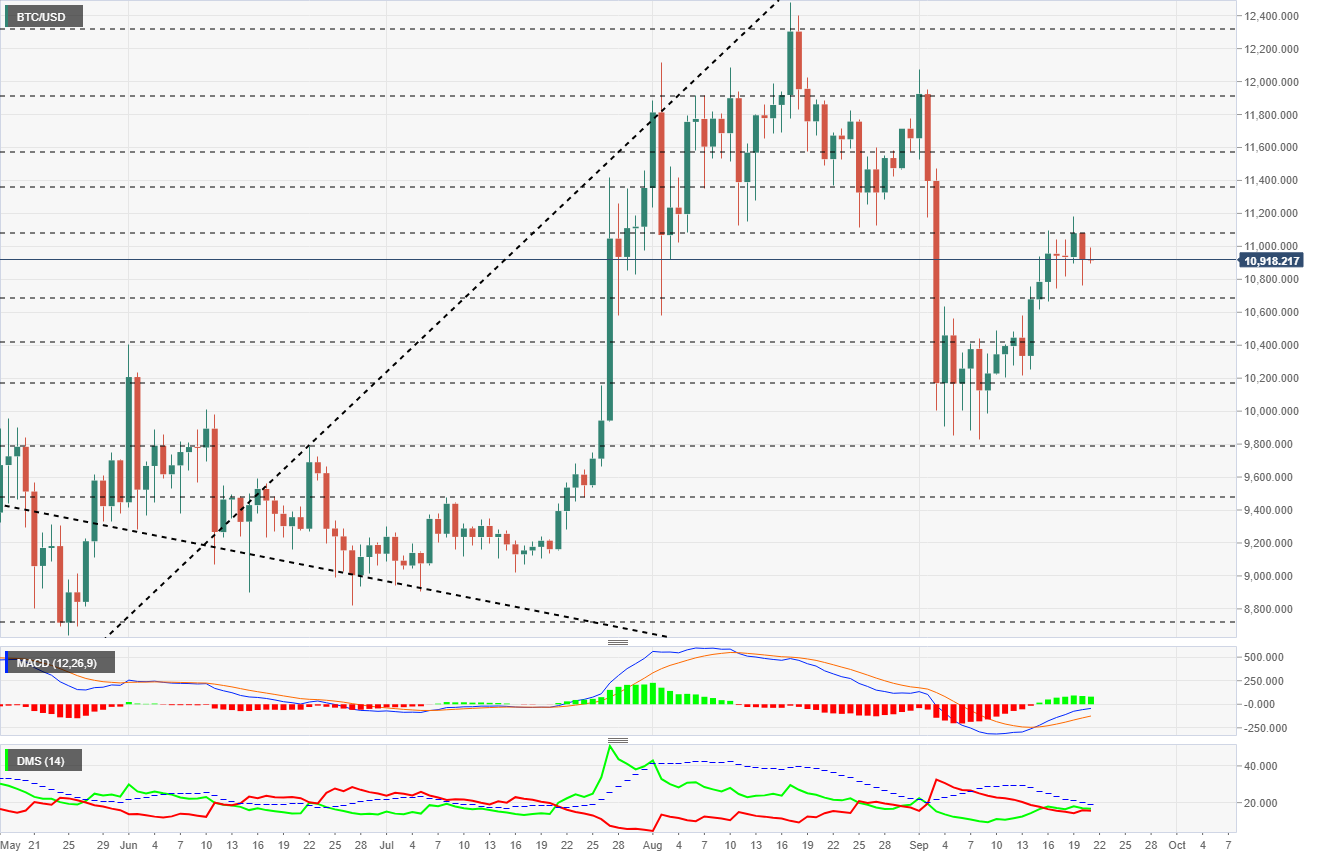 The MACD on the daily chart shows the moving averages losing strength as they approach the indicator’s neutral zone. The BTC/USD pair must move up soon if you want to avoid a setting in the MACD that would weigh on your behavior for several days.

The DMI on the daily chart shows bulls with a small advantage over bears, insufficient to validate the dominance of the buying side. 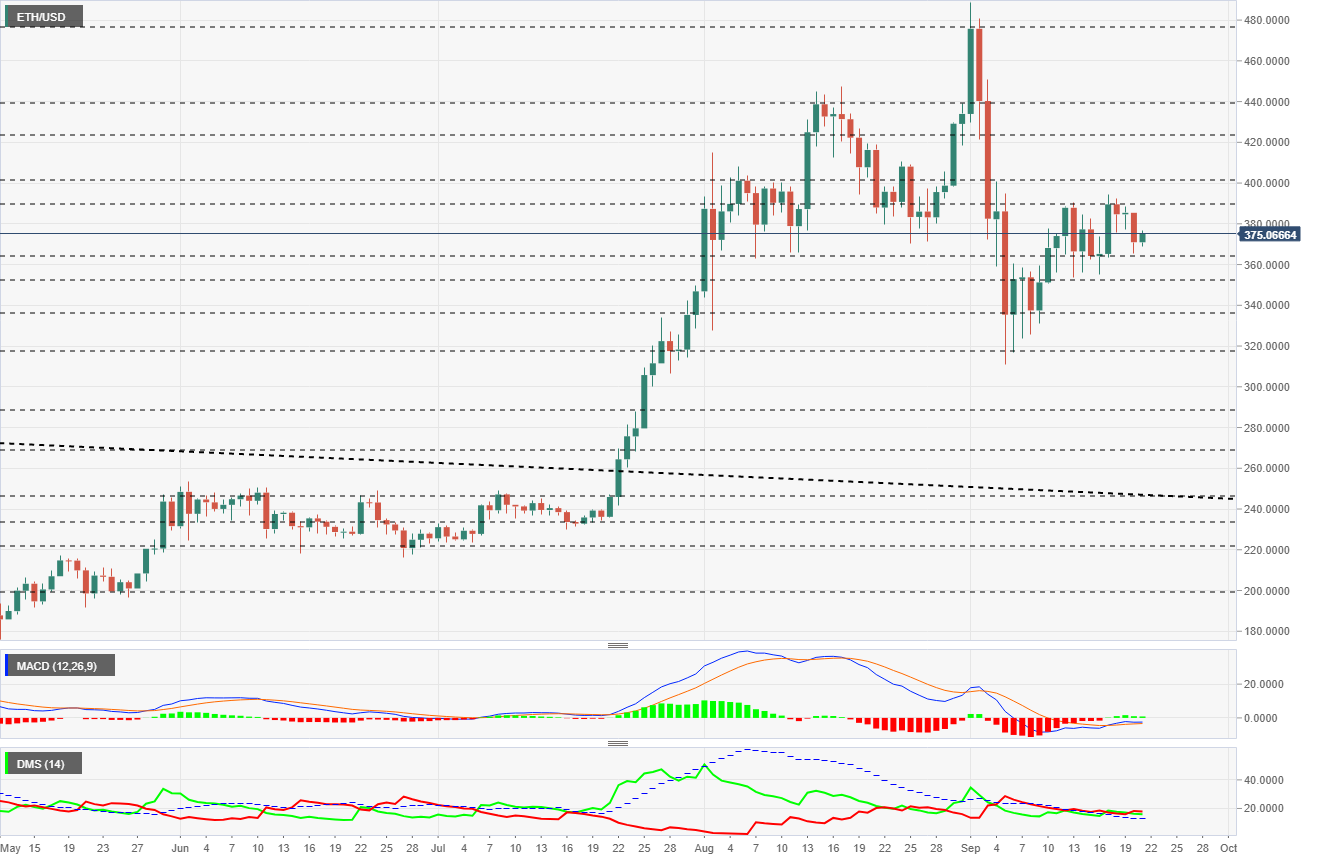 The MACD on the daily chart shows a potentially bullish profile once the moving averages have confirmed the upward cross that occurred last week. The zero level of the indicator remains the final hurdle to see a consistent upward movement in the ETH/USD pair.

The DMI on the daily chart shows the bears controlling the pair, although with a slight advantage. The position of both sides of the market above the ADX line promises speed in the next price movement.

The XRP/USD pair is currently trading at the price level of $0.245 and it is regaining this level of support due to congestion after losing it during the Asian session. 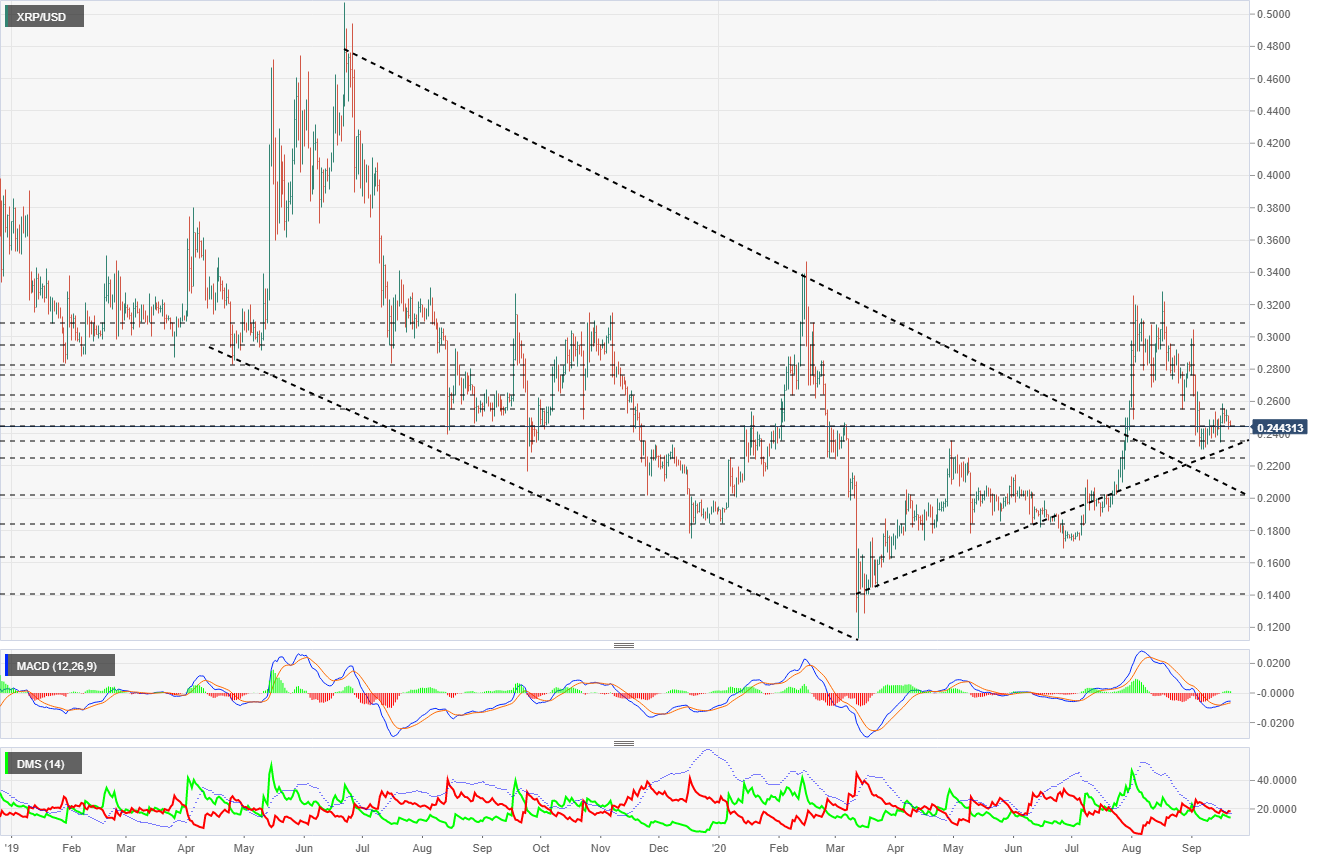 The MACD on the daily chart shows a very flat profile with little line spacing. The current structure suggests that an upward lateral move is most likely in the XRP/USD pair in the short term.

The DMI on the daily chart shows bears controlling the pair with a distinct advantage over bulls. The selling side is moving above the ADX line, which would give it significant upward potential.

Bitcoin is on its third positive consecutive session in a row on the dominance chart and points to strong market share increases. Crypto market raises doubts on price development in the short term. Technical indicators are showing volatility at the forefront as doubts are cleared in the short term. This weekend saw one attempt by Bitcoin to break the $11000 barrier by taking advantage of the gap that Ethereum left with its sudden attempt to reach the $400 price level. If both attempts failed and proved harmless against the US dollar, the effect on the Bitcoin/Ethereum interrelationship charts has not…