Bitcoin hit new yearly highs on Tuesday, shining a light on the possibility of a rally to $15,000. The liftoff carried some major cryptocurrencies upwards, including Ethereum and Ripple. A few decentralized finance (DeFi) tokens also towered above the crypto horizon, such as Compound (COMP) and Curve Dao Token (CRV).

The total capitalization of the cryptocurrency market has grown consistently over October. Data provided by CoinMarketCap shows the market size currently stands at $406 billion, up from $335 billion, recorded on October 1. Digital assets are likely to be getting ready for a significant bull run towards the end of the year.

The flagship cryptocurrency is holding marginally above $13,700 after a minor rejection from levels slightly above $13,800. BTC/USD appears to be seeking support before continuing with the rally above $14,000.

According to the 4-hour chart, Bitcoin could suffer another rejection from June 2019’s highs. However, moving past this hurdle will likely start bitcoin on an upswing to the region between $14,700 and $15,000.

The TD Sequential indicator could present a sell signal in the coming hours, giving credence to a bearish outlook. If validated, the flagship cryptocurrency may retrace to $13,300 or even the 50 Simple Moving Average (SMA) in the 4-hour timeframe. 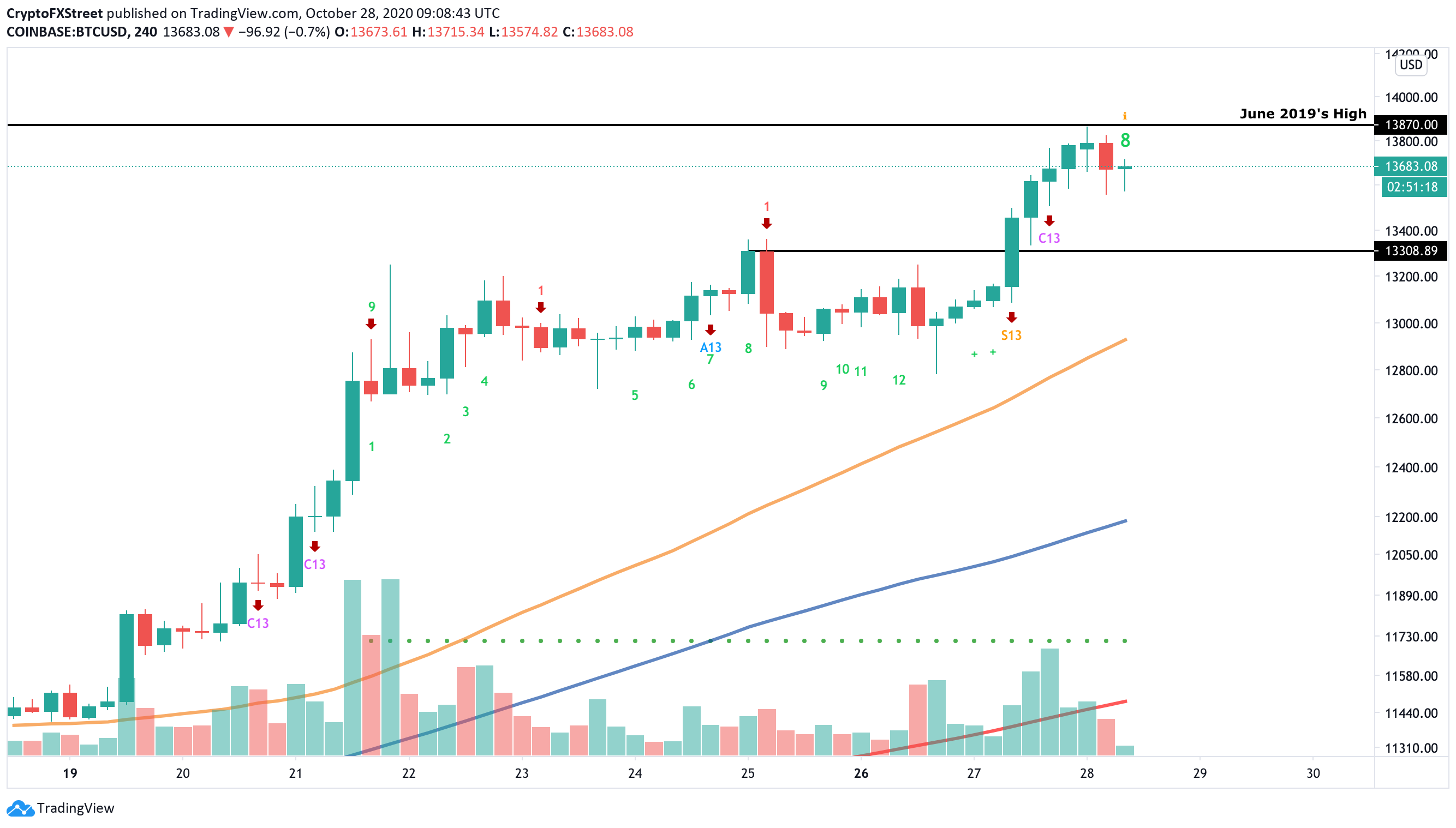 According to Parabolic Thies, a renowned analyst, Bitcoin is on the verge of breaking out to the highest level since January 2018. Interest in the flagship cryptocurrency is nearly hitting a five-year low as per Google Trends. All signals point to the beginning of an incredible bull run as soon as interest starts trending in the same direction as the price.

The smart contract cryptocurrency rallied in tandem with Bitcoin on Tuesday. Ether built upon the support provided at $390. Before that, ETH/USD embraced support above $380 after plunging from October highs at $420.

With the excellent price action on October 27, Ethereum retested the seller congestion at $410 before retreating towards $400. In the meantime, Ethereum is teetering at $397 and likely to retest the x-axis of the ascending triangle pattern. A rebound from the x-axis is likely to return Ether into the upward trajectory, with the upside eyeing $420.

The TD Sequential indicator gives credence to the bullish outlook after presenting a buy signal in the form of a red nine candlestick. Therefore, price action above $400 is in the offing while the journey back to $420 is in its initial stages.

It is worth mentioning that Ethereum’s bullish narrative could be sabotaged if Ether closes below the 100 SMA in the 4-hour timeframe. Consequently, a 20% correction into the picture with downside eyeing $306.

On the other hand, the IOMAP model reveals a relatively smoothed path to $500. If the subtle seller congestion between $404 and $416 is overcome, the smart contract giant may make haste towards $500. On-chain data also shows immense support running from $390 to $400. Hence, the unlikelihood of Ether falling further and, instead, relaunching the rocket flight to $500.

Ripple encounters yet another rejection

For a couple of days this week, XRP doubled down on the mission to push for gains above $0.3. The price action from descending parallel channel support stepped above $0.25 but failed to penetrate the seller congestion at $0.254.

The 100 SMA in the 1-hour range also added pressure on the cryptocurrency, culminating in another rejection. Meanwhile, XRP is contained within an ascending triangle pattern. Upward action from the current market could retest the x-axis of the triangle pattern around $0.26. A daily close above the triangle resistance might nurture a breakout to $0.3.

On the other hand, if the price closes below the 200 SMA in the 4-hour timeframe, the bullish trend could be invalidated altogether. Such a move is bound to trigger a 15.5% correction to $0.21.

Bitcoin’s outstanding rally to new yearly highs reminded investors that it is only at the beginning of an incredible bull run. As soon as the interest in Bitcoin, as seen on Google Trends, begins to trend upwards, the price is bound to start rolling to levels only seen In January 2018. Meanwhile, a minor retreat to $13,500 is anticipated before the rally to $15,000 begins.

Ethereum hit a snag slightly above $410 after making an impressive recovery to $390. For now, short term analysis shows Ether is likely to revisit support at $395 before resuming the uptrend.

On the other hand, Ripple is dealing with another rejection after hitting a barrier at $0.254. The 50 SMA is in line to offer immediate support. Losses could also extend to $0.246 if the tentative support at $0.25 fails to hold.

Bitcoin takes a breather from the impressive rally to new yearly highs; the mission to test $15,000 is intact. Ethereum might revisit $395 support levels before resuming the uptrend to $500. Ripple's rejected from levels above $0.25 again as buyers rush to hold the ground above $0.24. Bitcoin hit new yearly highs on Tuesday, shining a light on the possibility of a rally to $15,000. The liftoff carried some major cryptocurrencies upwards, including Ethereum and Ripple. A few decentralized finance (DeFi) tokens also towered above the crypto horizon, such as Compound (COMP) and Curve Dao Token (CRV). The total capitalization of the…