Latest
You are at:Home»Forex News»Trade wars come to haunt EUR/USD

The intensifying trade war between the US and China has rescued the euro from falling into the abyss – again – but probably for the wrong reasons.

August 23rd was never going to be a typical Friday in August. Traders were on the edge of their chairs in anticipation of Fed Chair Jerome Powell’s speech in Jackson Hole. However, the US-Sino trade war stole the show.

Beijing announced its countermeasures to Washington’s planned tariffs on September 1st and December 15th. These include new duties on $75 billion of American goods entering the world’s second-largest economy – including on crude oil. US President Donald Trump reacted furiously with a series of tweets – including calling on companies to leave China and announced new tariffs, including planned and existing levies by an additional 5%.

The reaction was swift – stocks tanked and money fled into the safety of US bonds. Falling yields reflect higher chances of the Fed cutting interest ratesand weakened the dollar against the euro.

Is the move justified?

Let us get back to Powell’s speech. The Fed Chair said that the bank would “act as appropriate” and dropped the words “mid-cycle adjustment” from the characterization of the previous rate cut in July. Departing from that cautious language implies the Fed – coming under constant attack from Trump – is now ready to reduce rates again. Nevertheless, Powell stressed that the US economy is still doing well and also hinted that monetary policy could not resolve all the recent developments.

See Powell powerless against Trump’s trade wars – US braces for a recession, USD set to move

Yet even if the Fed moves forward with monetary policy, it will be partially motivated by global weakness – and that includes Germany. The euro zone’s largest economy is on the verge of a recession – and its leaders refuse to prescribe stimulus. Jens Weidmann, President of the German central bank, the Bundesbank, has been the latest to reject injecting new funds. The locomotive of the euro area has been too dependent on exports – especially to China – and seems unwilling to diversify its economy.

IFO – Germany’s No. 1 Think-tank has sent a reminder of the economy’s weakness. The Business Climate survey dropped to 94.3 points, worse than expected. Klaus Wohlrabe, an economist with the institution, said that the industrial sector is already in recession and that the services one is now following. He added that the latest developments in the trade war are not reflected by the survey.

On this background, it is hard to see the euro thriving. Moreover, the European Central Bank is set to announce its own stimulus – ahead of the Fed.

All in all, the euro’s “Schadenfreude” – suffering from the misery of others – may reach its limits sooner rather than later.

Apart from this data point, the ongoing US-Sino trade war and worries about the German economy will likely dominate trading. 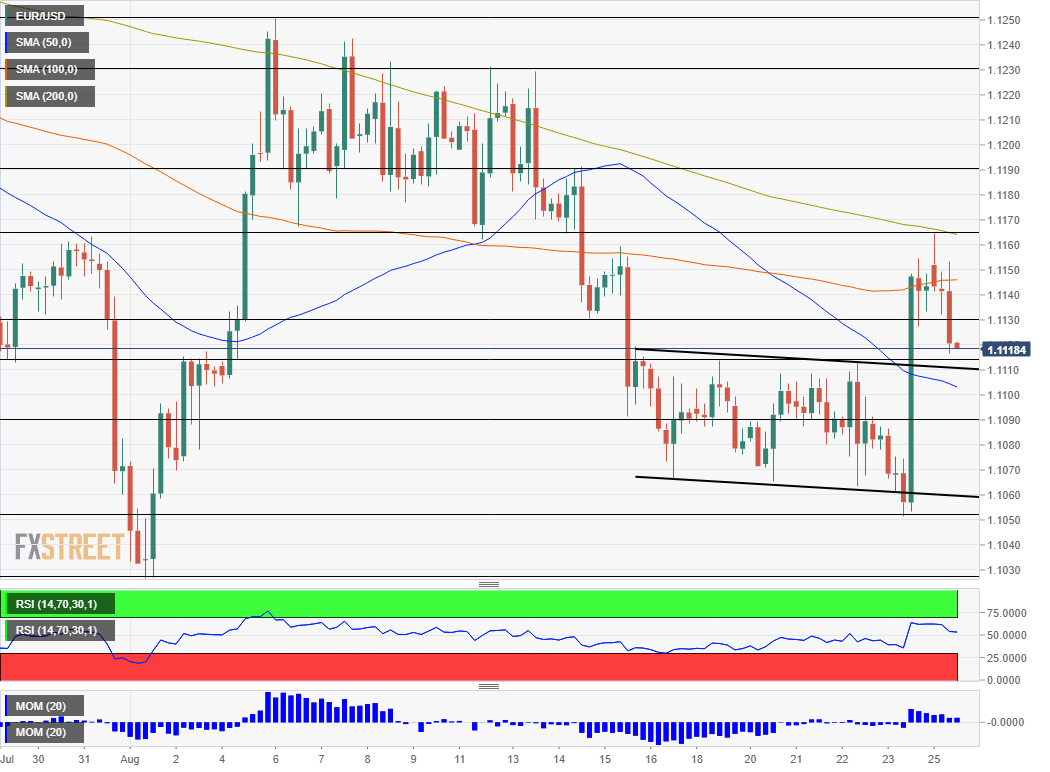 Friday’s move sent EUR/USD above the downtrend channel. The resistance line of that channel now serves as support. Momentum is marginally positive, but the currency pair is trading below the 100 and 200 Simple Moving Averages. All in all, the picture is mixed.

Get the 5 most predictable currency pairs
Previous ArticleIFO Economist: There will be GDP stagnation in Q2
Next Article How low can 10yr US bond yields go? – Westpac