UK economic outlook shows that the rebound is on track with second quarter GDP at 4.8%, which was in line with most economists’ forecasts, although slightly behind the Bank of England projection of 5.0%, with next week’s employment data likely to help forex trading players to get a handle on the UK growth trajectory.

Details on next week’s economic data on employment can be found in the table at foot of this story and on our live calendar page.

GBP/USD slipped 24 pips to 1.3843 after the GDP came out on Thursday and today (Friday 13 August) has continued that decline against the dollar, at 1.3795. GBPUSD has traded below the 50-day moving average since mid June, aside from a brief late July test.

On a year-on-year view the economy has grown 22.2% but the economy has still not made up all of the losses incurred on economic output as a result of the pandemic. That staggeringly high figure was based on a comp that saw the economy shrink by 6.1%.

But the second-quarter figure still meant the economy produced 4.4 per cent fewer goods and services than in Q4 2019.

UK a laggard among G7 economies despite faster GDP growth

The UK’s performance makes it a laggard among the advanced economies despite registering a faster growth rate than the rest of the G7 due to the deeper contraction it suffered.

GDP growth, is expected to slow in the third quarter because of the Delta variant and its impact on negative impact on economic activity against the background of the so called “pingdemic” that led to hundreds of thousands of people having to self isolate which contributed to already strained supply chains with the UK, foe example, estimated to be short of 100,000 heavy goods vehicle drivers.

If you are looking for the best forex broker for your requirements then check out our comprehensive guide.

ING analyst James Smith said: “In practice, we think the July and August GDP readings will average at roughly 0.2-0.3%, which translates into overall third-quarter growth in the region of 1.5% – quite a bit lower than the 3% figure the Bank of England is pencilling in.”

Helping the Q2 GDP figures was the strong performance of consumer spending as Brits slashed the cash on going out, with restaurants, transport and hotels particular beneficiaries. Consumer spending increased 7.3%. Output of the food and beverage sector leapt 10.1% as pubs and restaurants reopened

The Office for National Statistics (ONS) also estimates that in June economic growth was 1%, up from 0.6% in May, which would indicate that the recovery was quickening, but these are of course backward looking figures.

Jonathan Athow, the deputy national statistician at the ONS, commenting on the GDP data said: “The UK economy has continued to rebound strongly, with hospitality benefiting from the first full month of indoor dining, while spending on advertising was boosted by the reopening of many services.”

What the extent of the slowdown in the pace of the recovery looks like in Q3 may depend on how individuals behave post “freedom day”, as the government described the full reopening of the economy.

If Londoners’ mask-wearing is anything to go by, there’s still plenty of caution governing behaviour and that could have an adverse impact on areas such as travel and indoor activities returning to 100% of pre-pandemic levels.

But there are also indicators that consumers, although still cautious, are willing to return to their pre-pandemic consumption patterns.

ING analyst Smith notes: “Encouragingly, and despite hundreds of thousands of people having to self-isolate through July, social spending has stayed supported, bucking the overall decline in card expenditure since Covid-19 cases started rising rapidly.

“And if we look at the weekly ONS survey of individuals, the proportion of people visiting indoor hospitality was actually a little higher at the start of August than it had been in previous weeks.”

Steve Clayton, fund manager at HL Select was also upbeat, although does expect the pace of the growth rate to slacken although business investment should pick up: “These figures knock fears over the impact of the Delta variant on the head. Consumers are continuing to spend, regardless.

“With the big surge of the initial reopening behind us, we expect the pace of growth to moderate over the remainder of the year. But if businesses pick up the baton and start investing to support growth once more, then we could see upside to our already positive view of the prospects for the UK economy this year.”

And as far as business investment goes, there may be certain sectors that are more important than others in helping to drive profitable investment forward, according to Ian Warwick, Managing Partner at Deepbridge Capital. “Although expected with the economy reopening, today’s GDP data is the latest sign of positive growth for the economy.

Warwick continued: “As we continue to focus on economic recovery, it remains critically important that scale-up businesses, particularly in high-growth sectors such as digital technologies and life sciences are supported; as they will be at the very heart of economic growth as we create an economy fit for the twenty-first century.”

UK employment, earnings and inflation data up next week

Next Tuesday/Wednesday (17-18 August), a slew of UK economic data is released for including employment and earnings (17th) and inflation (18th). If the July inflation numbers come in hotter than forecast then that will likely be a booster for the pound.

The April employment reading was 25,000. Another positive reading would mark the fourth consecutive month of employment gains. The data measures the change in the three-month moving average of employment of over 16s.

There is also data to be released on the claimant count, earnings growth and the unemployment rate, which should all help to inform the Bank of England on the speed on monetary tightening. 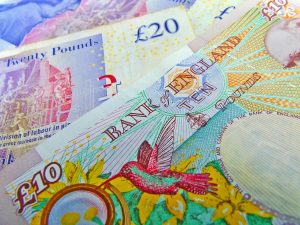 UK economic outlook shows that the rebound is on track with second quarter GDP at 4.8%, which was in line with most economists' forecasts, although slightly behind the Bank of England projection of 5.0%, with next week's employment data likely to help forex trading players to get a handle on the UK growth trajectory. Details on next week's economic data on employment can be found in the table at foot of this story and on our live calendar page. UK GDP data fallout: GBPUSD slips, EURGBP higher GBP/USD slipped 24 pips to 1.3843 after the GDP came out on Thursday…