Latest
You are at:Home»Opinions»UK inflation may fall and take GBP/USD with it

Brexit has been out of the spotlight – but sterling is struggling anyway. UK unemployment has risen to 3.9% in June – a satisfactory level in absolute terms – but the first rise in many years. Economists had expected it to remain unchanged. On the other hand, wages rose at an annualized pace of 3.7% as expected, and 3.9% when excluding bonuses – above projections.

The pound reaction has been mixed. Rising unemployment may prevent the Bank of England from contemplating a rate hike despite potentially higher inflation stemming from higher salaries.

In any case, the BOE is waiting for clarity on Brexit before changing its policy – and uncertainty remains high. The UK media suggests that prime minister Boris Johnson and his colleagues are expecting the pro-Remain camp in parliament to attempt – and fail – to block a no-deal Brexit on September 9th. After that, the EU may move. It is important to note that this is mere speculation. Both sides are currently ramping up preparations for a no-deal Brexit and prospects of an economic downturn weigh on the pound.

Tensions between the US and China have intensified after Mitch McConnell, the leader of the US Senate has expressed support for the people of Hong Kong. His words came after authorities in the city-state canceled outgoing flights and as the Chinese media reported that armed police in neighboring Shenzhen are amassing.

A Chinese intervention to stem pro-Democracy demonstrations in the financial hub may further aggravate tensions between the world’s largest economies. Investors have flocked into the safety of bonds, and stocks dropped. And while Beijing has fixed yuan above levels expected by markets, it continues the gradual devaluation of the currency – angering Washington.

The US Federal Reserve cut rates due to trade tensions and low inflation. Today’s fresh Consumer Price Index (CPI) report will shed light on inflation trends. A repeat of 2.1% on annual core CPI is on the cards. Any deviation may have a considerable impact on the dollar.

While data points from both the UK and the US are of high importance, Brexit and trade developments will likely dominate trading. 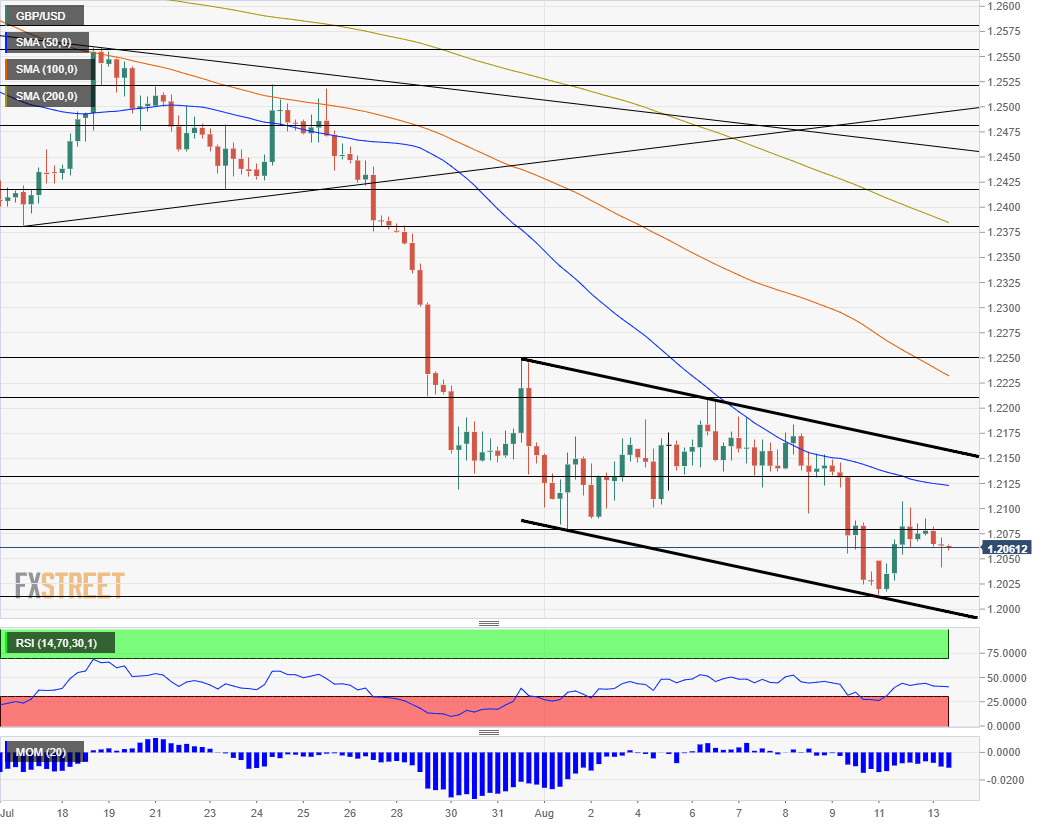 GBP/USD is trading within a downtrend channel that has characterized its trading since late July. Momentum on the four-hour chart is to the downside, and the pair is trading below the 50, 100, and 200 Simple Moving Averages. All in all, bears are in control.

Get the 5 most predictable currency pairs
Previous ArticleUS Pres. Trump: Call with China was very productive
Next Article US CPI: Tariffs drive goods prices higher, but overall impact to should be fairly small – Wells Fargo