Uniswap, the decentralized trading platform and a premier DeFi project, has launched its governance token – UNI. One billion coins will be released to the public over the next four years. The token allocation will look like this:

The company announced about the token:

UNI officially enshrines Uniswap as publicly-owned and self-sustainable infrastructure while continuing to carefully protect its indestructible and autonomous qualities.

This move is a direct response to SushiSwap sucking away over $800 million of Uniswap’s liquidity. The two are currently battling to reign supreme in the automated market makers (AMMs) space. SushiSwap, as previously reported, is trying to recover after a long period of internal politics and drama.

Uniswap will launch a liquidity mining program on September 18 that’ll target its USDT, USDC, DAI and wBTC pools. The firm also made it clear that the team members will not participate in governance in the near future. They can, however, delegate votes to protocol delegates. All UNI holders will have ownership of the governance process.

Binance immediately listed UNI and has opened trading for UNI/BTC, UNI/BNB, UNI/BUSD and UNI/USDT trading pairs. Since the Exchange recently came under fire for listing the SUSHI tokens, they released the following cautionary message:

UNI is a new token that poses higher than normal risk, and as such, will likely be subject to high price volatility. Please ensure that you exercise sufficient risk management, that you have done your own research in regards to UNI’s fundamentals and fully understand the project before opting to trade.

DeFi Pulse allows us to check the total value locked (TVL) up in Uniswap’s protocol. 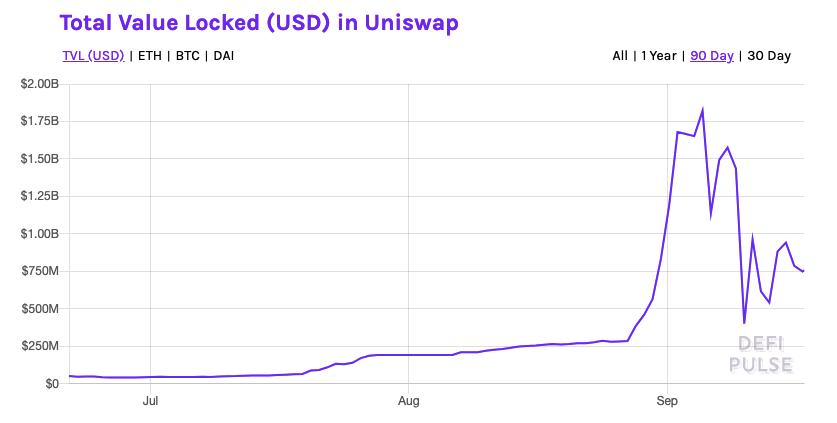