Uniswap price during the weekend volatility collapsed below the lower trend line of a rising wedge pattern. Still, for three consecutive days, the altcoin rebounded to close above the 50-day simple moving average (SMA). The mild break down and the ensuing rebound back into the wedge was a bear trap, releasing weak holders and raising the probability of higher prices.

Concentrated liquidity and multiple fee tiers at the core of V3

In an April 21 announcement, Uniswap Labs confirmed that the protocol’s V3 core and periphery contracts had been deployed to all major Ethereum testnets but advised users that the addresses were not final and would be updated when all the changes to the periphery repository were complete.

In the V3 iteration, the firm promises up to 4,000 times capital efficiency relative to Uniswap V2. The key change is what UNI calls concentrated liquidity. It allows liquidity providers to establish minimum and maximum prices to make trading on the platform more capital efficient.

It gives liquidity providers more control over the price ranges in which their capital is used, with limited effect on liquidity fragmentation and gas inefficiency.

It is expected that V3 will notably elevate the adoption of Uniswap among traders and be a driver for the broader DeFi market because it provides three distinct fee levels per pair based on the forecasted pair volatility, thereby offering improved protection against impermanent loss to liquidity providers.

The official launch date is May 5, and to ensure the readiness of V3, it has established a bug bounty for the discovery of significant bugs in the V3’s contracts. Rewards can climb to as high as $500,000.

Today, the Intotheblock In/Out of the Money Around Price (IOMAP) displays minor clusters of UNI holders in a state of loss, opening a path higher for the altcoin. Conversely, 91% of UNI holders have a profit and are clustered between $31.63 and $33.88, with 14.52k addresses holding 24.16m UNI. Important to note that the support clusters coincide with the wedge’s lower trend line and the 50-day SMA.

Earlier this week, it appeared that the 56-day rising wedge pattern had resolved to the downside on April 18, but selling did not overwhelm UNI. Instead, the DeFi leader rebounded back into the wedge, defining a bear trap. The brief sell-off has positioned it to trade through the wedge’s upper trendline at $40.80.

The first region of resistance is the 161.8% Fibonacci extension of the February crash at $47.67, followed by the wedge’s measured move target of $55.93, a gain of 50% from the current price. The measured move coincides with the topside trendline that begins in September 2020 and passes through the February high.

Market participants should not rule out a test of the 261.8% extension at $86.43 if the topside trendline is quickly discarded. 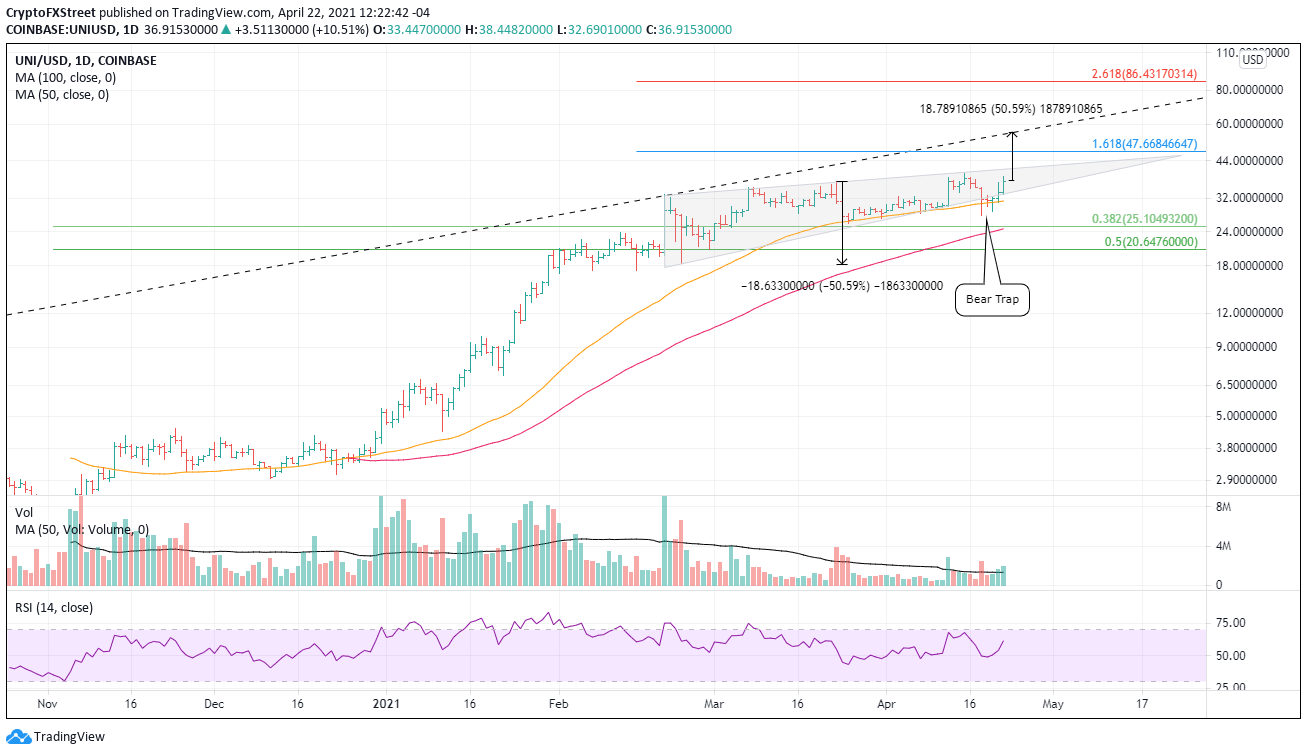 Get the 5 most predictable currency pairs
Previous ArticleUS stocks fall sharply on report of US Pres. Biden’s plan to hike capital gains tax
Next Article US Pres. Biden to use tax increases to pay for major spending plan for families – Reuters