Home » Uniswap Price Forecast: UNI ready for a bullish assault, once $5.7 is cleared

Uniswap Price Forecast: UNI ready for a bullish assault, once $5.7 is cleared

UNI, the native token of a popular DeFi project Uniswap, rebounded from the support of $4.7 to trade above $5.5 during early Asian hours. By the time of writing, the token retreated to $4.9; however, the short-term technical picture implies that the downside correction from the historical high may be coming to an end. Let’s have a closer look at the technical indicators and on-chain metrics to see if the coin is ready to resume its upside quest.

On the 1-hour chart, UNI/USD broke above the descending trendline that was limiting the price recovery since the weekend. If the bulls manage to turn into the support, UNI will get a robust jumping-off ground with the first target at $5.7 created by 1-hour SMA50. Once it is cleared, the next bullish target of $7.50 will come into focus, followed by the all-time high of $8.66 hit on September 18.

Meanwhile, on the downside, the initial support is created by the lower boundary of the 1-hour Bollinger Band at $4.7. If it is broken, the price may retest the broken trendline at $4.3, where fresh buying interest is likely to appear. However, a sustainable move below this level will negate the favorable scenario and push the price towards the historical low of $3.15. 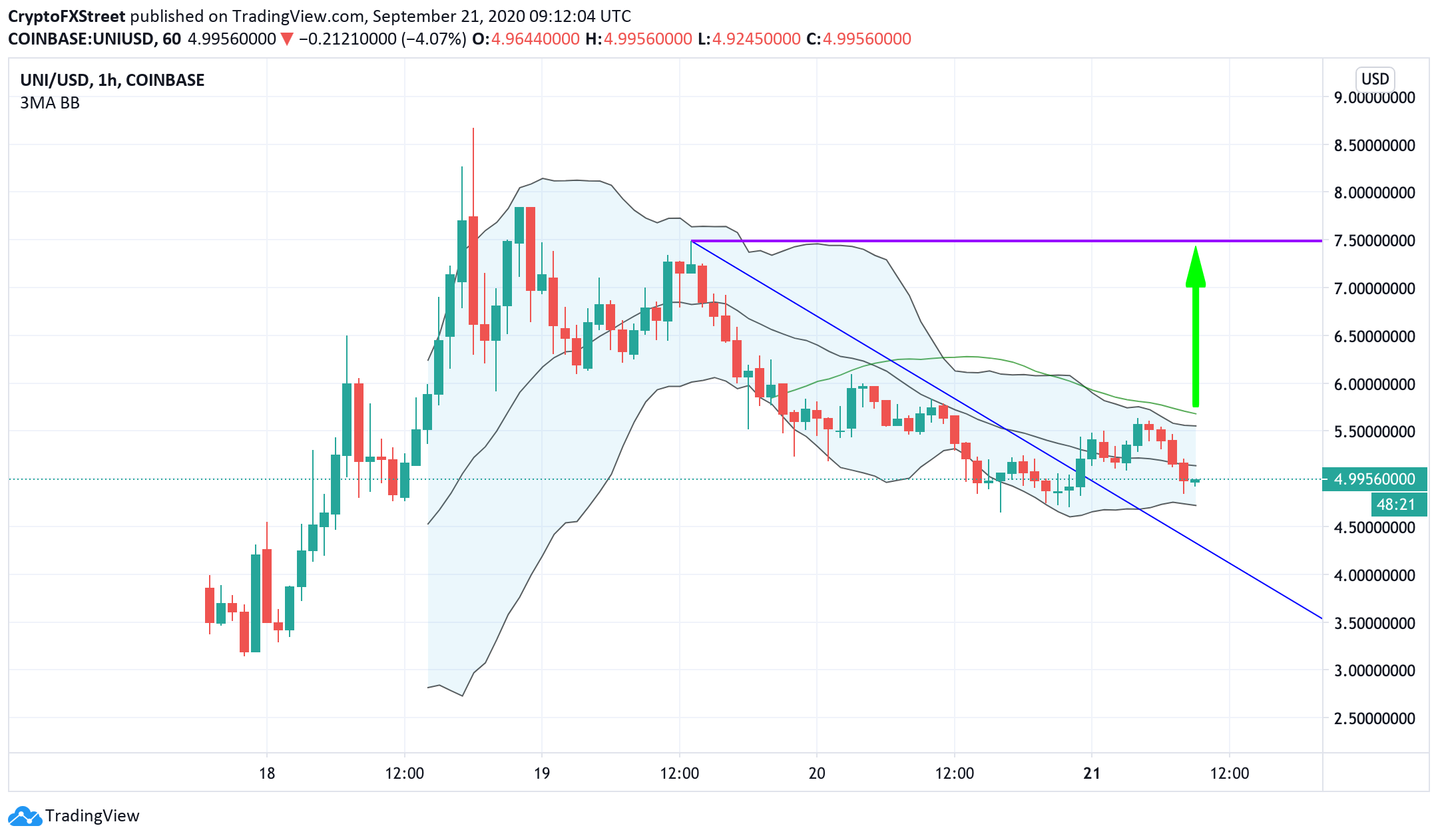 UNI’s token peaked at $8.66 on September 18 and started the downside correction from the all-time high as users rushed to cash out after the airdrop. The selling pressure was intense during the past weekend as the token lost nearly half of its value.

However, the coin-chain metrics, provided by Santiment, implies that UNI’s whales might have been buying the tokens amid the price correction. The chart below shows that the number of wallets holding from 100,000 to 1 million coins has increased from 89 to 111 in just two days. Large holders with over 1 million coins are also inclined to increase their exposure.

Considering that market tends to follow the whales’ lead, UNI’s price may be poised for a sharp recovery during the nearest trading sessions. This theory is confirmed by the faded away sell-off pattern. Looks like those who wanted to cash out their airdrop proceeds gave already done this.

Uniswap is a decentralized cryptocurrency exchange with a twist. It allows people to swap their tokens directly between each other, with no trustee or the third-party involved. Apart from that, Uniswap smart contracts allow users to earn rewards by providing liquidity or remove liquidity from pools. Uniswap’s protocol gave birth to numerous copycats. The mushrooming “food” DeFi-projects, like SUSHI and KIMCHI, used Uniswap’s code as a basis for their protocols.

However, Uniswap remains a pioneer with support from many industry experts. Recently, the founder of another popular DeFi project YEARN Finance, Andre Cronje, announced that he would want to become a Uniswap’s delegate. He plans to implement off-chain voting and enhance various on-chain functions, provided that he gains enough support.

Cronje’s decision to become Uniswap’s delegate excited the community and potentially created strong support for eh token. Considering the comments under his tweet, people will be happy to see him as a delegate; thus, he might have a real influence on the project’s path of development.

To conclude: UNI is well-positioned for a sustainable recovery from the recent low amid supportive fundamental and on-chain factors. However, we will need to see a sustainable move above 1-hour SMA50 before the upside momentum is confirmed. On the other hand, a sell-off below the downside trend line at $4.3 will invalidate the bullish scenario and bring the recent low of $3.15 in focus.

UK’s Chief Medical Adviser: No evidence this is a milder virus than earlier in year

UNI/USD settled above the downside trendline amid technical recovery. The fundamental and on-chain metrics support further upside move. UNI, the native token of a popular DeFi project Uniswap, rebounded from the support of $4.7 to trade above $5.5 during early Asian hours. By the time of writing, the token retreated to $4.9; however, the short-term technical picture implies that the downside correction from the historical high may be coming to an end. Let's have a closer look at the technical indicators and on-chain metrics to see if the coin is ready to resume its upside quest. UNI/USD: The technical picture…