Latest
You are at:Home»FXStreet News»US Dollar Index sticks to gains below 91.00, looks to data

The US Dollar Index (DXY), which gauges the greenback vs. a bundle of its main competitors, manage to regain come buying interest and advance to the 90.90 region.

Following a move to fresh 4-week highs in the 91.40 region on turnaround Tuesday, the index ended the session with moderate losses on the back of the dovish message from FOMC’s L.Brainard and the retracement in US yields.

The dollar, in the meantime, keeps navigating in the current context where the US economic recovery is seen outperforming its G10 peers, the vaccine rollout keeps gathering traction and inflation expectations remain on the rise. 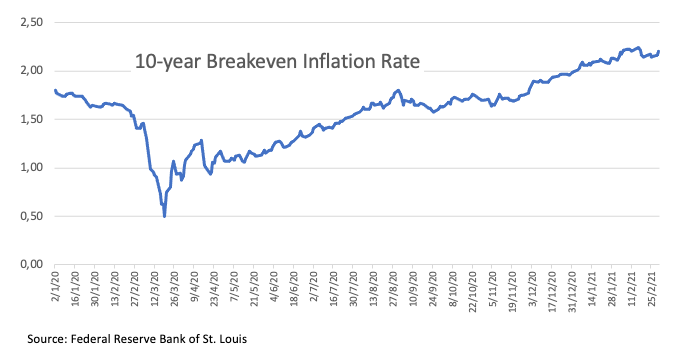 On Wednesday’s docket, MBA will publish its weekly figures for Mortgage Applications followed by the ADP report on the job creation in the US private sector, Markit’s final Services PMI for the month of February, the ISM Non-Manufacturing during the same period and the Fed will release its Beige Book.

What to look for around USD

The index came under some correction following multi-week tops beyond the 91.00 mark earlier in the week. The reversion of the recent weakness in the dollar came in tandem with the strong bounce of yields to levels last recorded a year ago. While the reflation/vaccine trade continues to keep bullish attempts in the buck contained, bouts of concerns regarding a pick-up in inflation (and inflation expectations) stemming from the expected extra fiscal stimulus plus the expected outperformance of the US economy against economies overseas could provide some pockets of strength in the dollar for the time being. Against this, occasional upside in the buck should remain short-lived amidst the broad-based bearish outlook for the currency in the medium/longer-term. This, in turn, is propped up by the reinforced mega-accommodative stance from the Fed until “substantial further progress” is seen, persistent chatter of extra fiscal stimulus and prospects of a strong recovery in the global economy, which are all seen underpinning the better sentiment in the risk complex.

Eminent issues on the back boiler: US-China trade conflict under the Biden’s administration. Tapering speculation vs. economic recovery. US real interest rates vs. Europe. Could US fiscal stimulus lead to overheating? Future of the Republican party post-Trump acquittal.