Home » US election wrap: It ain’t over until … the Trump concedes defeat

US election wrap: It ain’t over until … the Trump concedes defeat

The Democratic Party’s Joe Biden is way in the lead in terms of the Electoral College votes with just 6 votes needed to win the US Election according to The Associated Press: 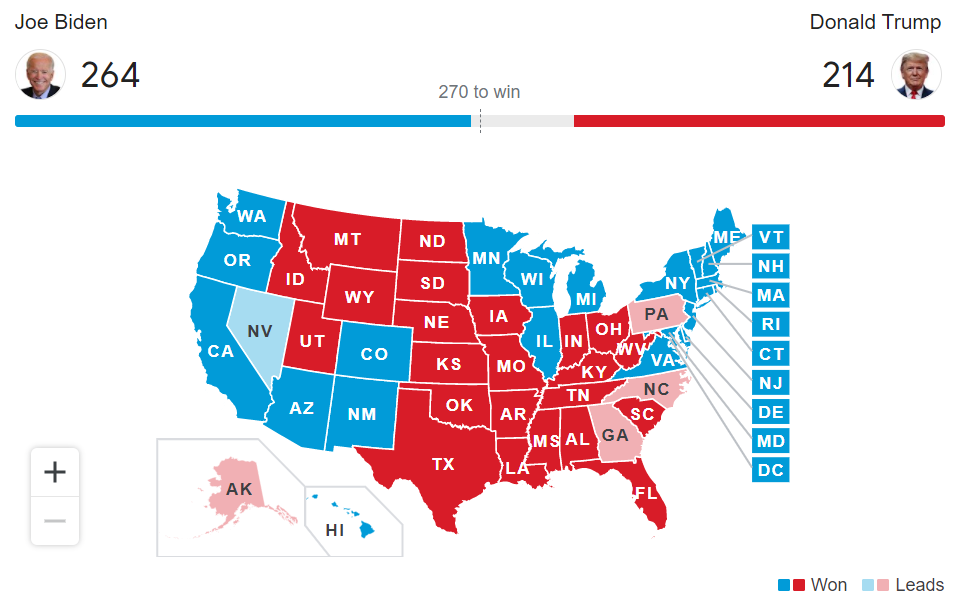 However, it could be a long road ahead in a tight photo finish considering how many votes are still left to be counted in various swing states.

At the end of the day/election, it all comes down to whether the incumbent US president actually makes the call and concedes defeat, and that is not likely from Trump.

More than likely will be a long-drawn-out contested election result in the courts.

On Wednesday night in the US, Joe Biden was projected to have won Michigan and Wisconsin.

This leaves him a stone throw away from the White House and the key states of Nevada and Georgia could be declared in the next few hours to confirm the Biden victory.

As such, Joe Biden has declared it was “clear” he had won but Donald Trump has struck back with a series of legal challenges, claiming victory for himself while the result remains in the balance.

Trump’s campaign is seeking to halt vote counts in battleground states, such as Pennsylvania and Georgia, requiring all counties to separate any wand all late-arriving ballots.

Mr Trump’s campaign has also filed a legal challenge to stop the count in Michigan, which Biden has taken, asserting it had not been allowed to observe ballots being opened.

This is all suggesting a turbulent few days to come for the financial and commodities markets.

There are reports that Biden’s campaign has already emailed supporters asking for money to challenge the result of the election.

Elsewhere, as the GOP looks set to take the Senate and block a so-called ”Blue Wave”, but its still in play.

The Democrats need two more seats to have a majority if Biden wins.

GOP’s Meijer just won the House Election in Michigan 3rd District and Gary Peterson the Senate which brings the Democrats’ total number to 45.

So, the House Democrats will keep the majority but the Senate is still in play in and to close to call in  Alaska, Arizona, Georgia and North Carolina.

Eyes on the US dollar

As for the markets, the risk-off currencies will be vulnerable, such as the Australian dollar, while the US dollar and yen will likely remain robust until the markets factor in the most probable resolve.

Markets, as we have seen throughout the pandemic, have weathered risk factors very well and have taken a ”keep calm and carry on” style of approach.

In doing so, US stocks on Wall Street rallied on Wednesday in the probability of a Biden victory, regardless that Trump had said he will take his legal battle all the way to the Supreme Court.

Meanwhile, the US dollar is a major focus.

The price has action has been sideways for the best part of the late NY session and Asia so far, but it is not going down without a fight, correlated to Trump’s intentions.

S&P 500 Futures print mild gains above 3,400 as US election race gets tough

Trump has filed a legal battle to contest the US elections that are inevitably resulting in a Biden victory.  Risk-FX is not out of the woods yet ad the US dollar is holding at support in a slow, but bullish correction.  The Democratic Party's Joe Biden is way in the lead in terms of the Electoral College votes with just 6 votes needed to win the US Election according to The Associated Press:  However, it could be a long road ahead in a tight photo finish considering how many votes are still left to be counted in various swing states. At the…