Home » US Elections are finally here: Buckle-in for volatility

US Elections are finally here: Buckle-in for volatility

It’s finally arrived, the US elections and the stakes have not been higher in generations for a nation in crisis and financial and commodity markets.

High volatility is on the cards.

To stay on top of the build-up and the running total of votes as the are reported in each state, CBS News has a live video stream on YouTube as follows:

Trump or Biden? Don’t miss our live coverage of the US elections!

The US Presidential Elections are finally here and stocks, the dollar, and gold are ready to explode. Our experts will analyze the market reaction with live coverage of the long volatile night, starting today at 00.00 GMT.

FXStreet’s exclusive coverage will give you timely forex market analysis from our expert Senior Analysts Yohay Elam and Joesph Trevisani.

Their analysis is sure to keep you one step ahead and will give you an edge in trading over the event.

Meanwhile, the following is your go-to place for reference during the event that includes key information and Bank analysis from the likes of TD Securities.

Markets into the polls

Financial markets have built up a Democratic Party win which means the biggest risk to markets is a contested result or an outright projection of a Trump victory which would reverse the build and some.

Indeed, US equities rallied on Election Day as a clear Biden victory from the election is expected to result in the delivery of the much-awaited fiscal stimulus package.

Interestingly, the US dollar was about flat against the Japanese yen but otherwise lost substantial ground to G10 currencies. This is a critical feature of this event. More on that below under, ‘What forex to watch’.

AUD/USD climbed from 0.7035 to 0.7175 for a three-week high despite yesterday’s dovish Reserve Bank of Australia outcome. This makes for a compelling watch during the election considering AUD is regarded as a closely correlated market for today’s event. If you strip out the Biden bid, AUD would probably be lower on the RBA uber dovishness.

The Norwegian krone was also a significantly strong G10 currency in the build-up, regarded as a higher beat to the even as well.

When do we usually get a US election result?

The result is usually clear on the night of election day, but there are questions on everybody’s minds as to when we will get a projection considering how much more of the population has turned out to vote.

We will then get a running total of votes as they are reported in each state through the media.

The full count is never completed on election night – but there should be enough votes in to confirm a winner.

The media will then be responsible for letting us know when state is “called” by major US media outlets as soon as they believe one candidate has an unbeatable lead.

But at this stage, when most but not all of the votes will have been counted, this is a projection, not the final result.

So what are the scenarios?

Analysts at TD Securities have explained that the current polling suggests a Biden win with 340 Electoral Votes (EVs) and Democrats taking the Senate with 52 seats.

”However betting markets are more conservative, with some signs polls are tightening slightly in the past week.

Florida could report around 11 pm ET.

If Biden wins, markets likely price in his victory of at least 340 EVs.

However, if Trump wins, that only means a long wait for GA/IA/PA/WI/MI/AZ.

”If Democrats steal any of the early races (SC/KS/AK/MT), the market may be comfortable pricing in Democratic control.”

”But if Republicans win as expected, it only means a long wait for IA/ME/NC, plus 1-2 GA races needing a Jan 5 runoff. To price in fiscal expansion, the market needs the Senate results.”

”A tight, uncertain Presidential result should be risk-off, bull flattening the curve, while the Senate results will be needed for the market to price in the extent of fiscal easing. If Republicans keep the Senate, a contested Presidency may not matter as much for markets since it will be a split government.”

”Markets are positioned for a Blue Wave so any deviation should benefit the USD on the night. Short-term positioning and mobility models point to a modest USD discount, but the USD can still drop 2% (and more into year-end) if current polling and expectations prevail on a swift election resolution.”

What forex to watch

Higher beta, undervalued NOK and AUD should benefit the most from the Blue wave outcome, while USD and the safe-haven JPY should turn into the underperformers.

For the yen, equities will be critical.

Dollar short positions have been mounting and are therefore subject to a sharp reversal on a Trump victory or contested election.

Therefore, yen value might have to be searched for in the crosses in any scenario other than a market-friendly Blue wave.

AUD/JPY, GBP/JPY and EUR/JPY could be where the most action will be seen when considering an ultra-easy Reserve Bank of Australia, Brexit and UK/EU COVID risks as well as a technically vulnerable EUR/USD: 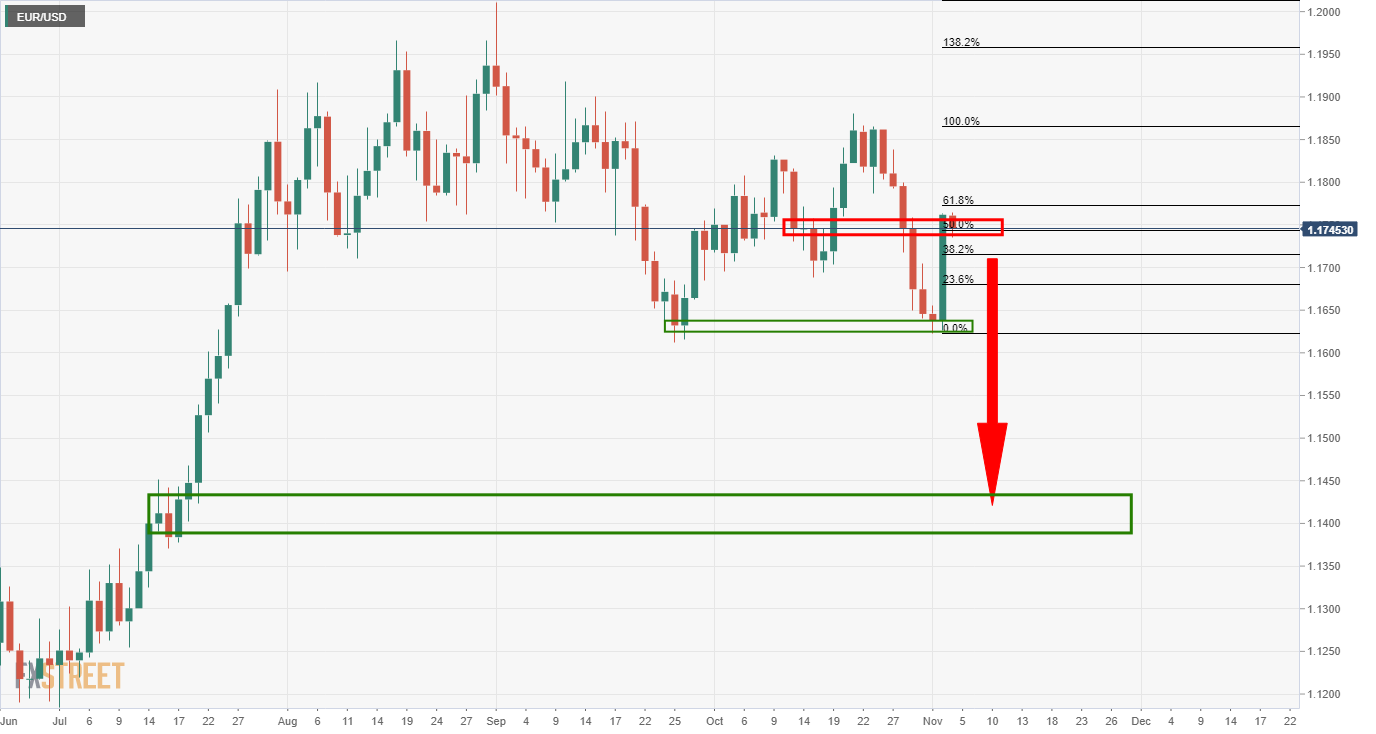 A short squeeze in the dollar on a Trump victory/contested election will surely weigh heavily on the euro.

The uncertainty favours the yen which could materially impact EUR/JPY heavily to the downside.

The following is a bearish market structure analysis of EUR/JPY which forecasts two ultimately bearish scenarios and a bullish bias above 124.20.

It may be useful for swing traders.

Traders trading the event will need to contend with shorter-term chart volatility and buckle-in.

2) The price runs higher to test mid-October lows and a 61.8% Fibonacci confluence before falling in a bearish extension in a -0.272 Fibonacci of the correction lows and highs to test 121.05.

Watch live at CBS News and follow FXStreet's running Analysis.  When do we usually get a US election result? The forex that matters are the yen crosses, higher betas such as AUD and CAD. Gold price and its correlation to the US dollar and depending on who the next US president will be.  It's finally arrived, the US elections and the stakes have not been higher in generations for a nation in crisis and financial and commodity markets. High volatility is on the cards.  We are now heading to the finish line with the first polls on the East Coast at 19.00 local time,…