It is nothing to write home about, but the US labour market continues to show gradual, if unspectacular, improvement. The good news included the 216K rise in non-farm payrolls in March, the largest increase for ten months, and the continued decline in the unemployment rate, now 8.8%. Encouragingly, the latter was due to a 291K increase in household employment in the month – in the last four months, almost 1m jobs have been created. This is despite a 100K decline in government employment over the same period. Also, the number of unemployed has fallen by a very pleasing 1.5m since November, although at the same time there have been an extra 800K people drop out of the labour force altogether. Despite these healthier signs, there is still plenty to concern – wages continue to moderate, and the duration of unemployment continues to lengthen. Very slowly, the corner seems to have been turned in the US jobs market. Should it continue, Fed officials will become more convinced to end quantitative easing when QE2 ends in a couple of month’s time. 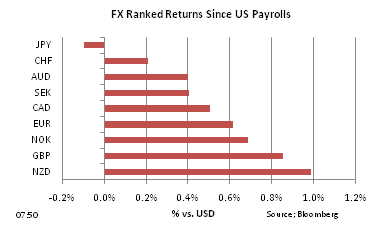 Dudley’s dovishness tempers dollar’s gains. New York Fed President Dudley threw a spanner in the works for the newly-converted dollar bulls late on Friday with some rather dovish remarks. He suggested that ‘even if we were to generate growth of 300K jobs per month we would still likely have considerable slack in the labour market at the end of 2012’. Dudley also said he would be surprised if QE2 did not complete in June, and that he saw no reason to pull back from monetary stimulus. This last statement can be interpreted in many ways – it could purely mean that interest rates remain low and QE is discontinued.

Two more reasons to doubt the yen. After the tragic earthquake and subsequent tsunami, the immediate expectation was that there would be some significant repatriation back to Japan to help pay for both the insurance costs and re-building of lost infrastructure. Based on the latest figures on capital flows from the MOF, this expectation appears to have been misplaced. In the week ended March 25th, net buying of foreign bonds and notes rose to JPY973bn ($11.3bn), the highest weekly total for six months. Rather than bring funds home, Japanese funds were net buyers of foreign securities for a third straight week. Clearly, this yen outflow has contributed to the recent weakness of the currency. Another factor that may partially account for the fall in the Japanese currency is speculation that the BOJ may be tempted to underwrite some issues of government bonds. New BOJ Board member Shirai tried to kick this idea into the long grass on Friday, but nevertheless the suspicion remains that the idea is at least being discussed in Tokyo.

UK Q1 recovery in doubt. There remains a lot of uncertainty as to the extent to which the UK economy bounced back from the Q4 weakness last quarter and Friday’s PMI manufacturing survey only added to this uncertainty. The manufacturing sector has been one of the brighter spots in the recovery so far, benefitting in part from the weakness in sterling. Indeed, last year it contributed nearly one-third of the 1.3% growth in the overall economy. However, the fall in the manufacturing PMI balance in March to 57.1, from 61.5 previously, suggests a softening in the pace of output. Furthermore, the new orders balance, which fell from 62.0 to 54.9 hints that this may be more than just a one-month blip. Given that the economy contracted 0.5% in Q4 of last year, anything less than a 0.5% increase in the current quarter will be taken as a sign that the economy has essentially ground to a halt over the previous six months, even though technically this may not constitute a recession in the more technical definition. For those more cautious elements on the MPC, a meaningful recovery in Q1 appeared to be a pre-requisite to a tightening of policy. Right now, it’s looking questionable whether the bounce-back will be sufficient to satisfy the remaining doubters on the MPC. Whilst the ECB appears intent on raising rates next month, the road for the UK still remains rocky and Friday’s data only add to that perception.

China’s recovery appears to be slowing. We received further confirmation on Friday that China’s economy seems to be losing steam as the tightening measures of recent months appear to be having some impact. The PMI produced by the China Federation of Logistics and Purchasing rose to 53.4 last month, up from 52.2 in the previous month but below expectations. Importantly, it appears that output was boosted by migrant workers returning after the Chinese Lunar New Year celebrations. Inventories are climbing, which could signal some unintended accumulation as a result of weaker demand. Two weeks ago, PBOC Deputy Governor Yi Gang suggested that he was relaxed about the current setting of monetary policy, because he felt inflation would moderate in the second half of the year. Although he did not make it explicit, this opinion may well have been partially predicated on an understanding that the economy was likely to moderate.

Dollar soars vs. yen and Swiss franc after payrolls Dudley's dovishness tempers the dollar's gains Two more reasons to doubt the yen UK Q1 recovery in doubt China's recovery seems to be slowing It is nothing to write home about, but the US labour market continues to show gradual, if unspectacular, improvement. The good news included the 216K rise in non-farm payrolls in March, the largest increase for ten months, and the continued decline in the unemployment rate, now 8.8%. Encouragingly, the latter was due to a 291K increase in household employment in the month - in the last four…