USD/JPY and yen crosses in the spotlight for US elections

The US dollar is under pressure. DXY is down some 0.66% at the time of writing.

Markets have priced in a sweeping Democratic Party victory, or a so-called “blue wave,” where a win by former Vice President Joe Biden with Democrats taking both houses of Congress would indicate that further stimulus is on the way.

The dollar has been been on the back foot since markets started to price in a global economic recovery, a covid vaccine as well as ongoing fiscal and central bank stimulus in anticipation of renewed reflationary momentum.

The reflation would be expected to weigh on Treasury prices, pushing yields as well as equities higher and the US dollar lower.

Risks of a US election surprise

However, the elections are not a done deal.

Casting minds back to the polls of 2016, the Democratic nominee was ahead by a large margin but on election night, the now-US President Donald Trump won.

The risk for markets on election night is that If the result is close, and there is every chance it might be considering the key battleground states – a winner might not be called until much later into the night, if at all.

Considering the coronavirus, an extremely high turn out and numbers of mailed ballots are anticipated to slow up the process which also significantly risks the chances of a legal challenge by either party.

Markets will have their eyes on Florida, which is the largest swing state, for it has been counting mail-in ballots for some time, as have North Carolina, Georgia, Iowa, and Ohio.

Pennsylvania is another swing state which will count mail-in ballots received through Friday, which raises the prospects of on-going legal challenges.

Yen’s value could be through the crosses

For the yen, equities will be critical.

The risk of protests and outright rioting is significantly high for this year’s election which will not bode well for risk appetite, especially throughout a contested election.

On the flip side, it could be argued that both the yen and US dollar would appreciate if there is a contested outcome or if Trump surprises with a victory again.

Dollar short positions have been mounting and are therefore subject to a sharp reversal on a Trump victory or contested election.

Therefore, yen value might have to be searched for in the crosses in any scenario other than a market-friendly Blue wave.

AUD/JPY, GBP/JPY and EUR/JPY could be where the most action will be seen when considering an ultra-easy Reserve Bank of Australia, Brexit and UK/EU COVID risks as well as a technically vulnerable EUR/USD: 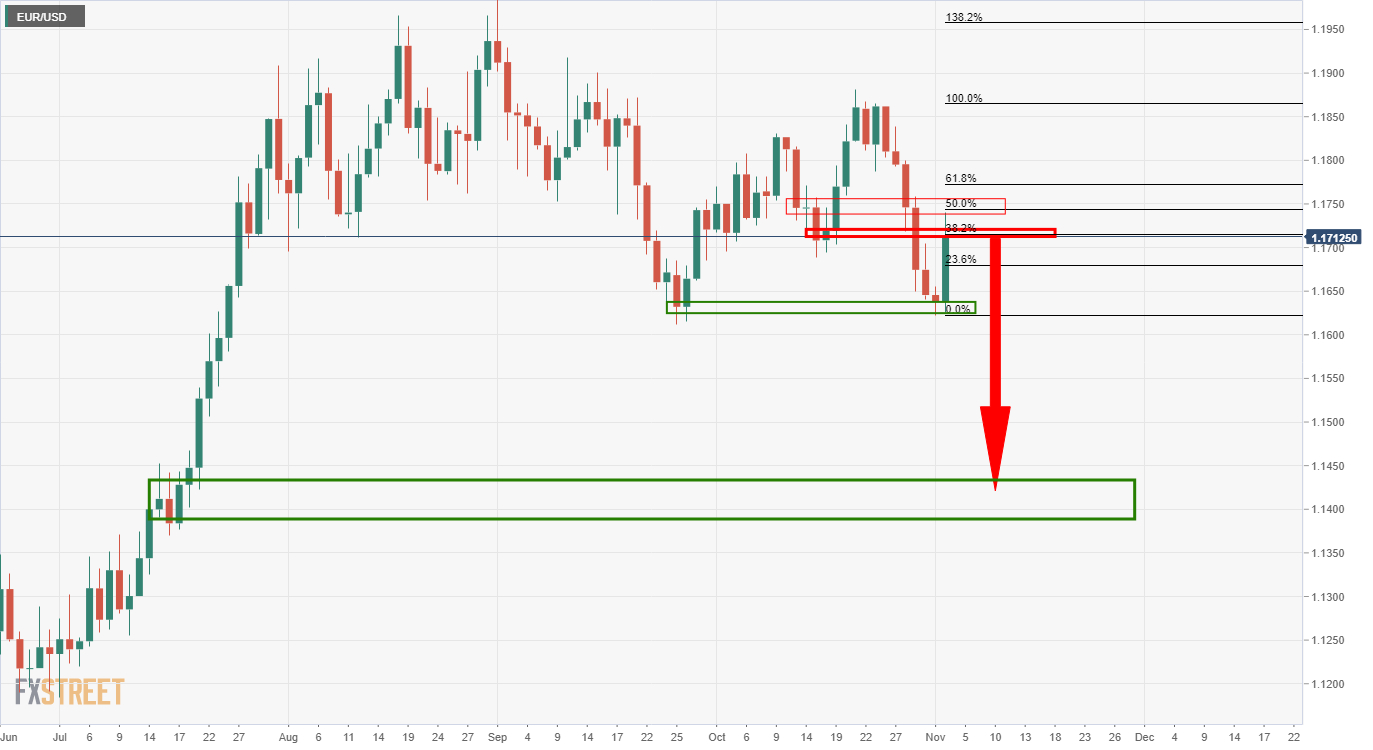 A short squeeze in the dollar on a Trump victory/contested election will surely weigh heavily on the euro. The uncertainty favours the yen could materially impact EUR/JPY heavily to the downside.

The following is a bearish market structure analysis of EUR/JPY which forecasts two ultimately bearish scenarios and a bullish bias above 124.20.

2) The price runs higher to test mid-October lows and a 61.8% Fibonacci confluence before falling in a bearish extension in a -0.272 Fibonacci of the correction lows and highs to test 121.05.

USD/JPY on the back foot as markets get set for a Blue wave.  The market is positioned heavily short of the greenback. A Trump surprise victory could upset the forex space. Yen's value might have to be searched for through the crosses.  USD/JPY is trading at 104.50 between a range of 104.43 and a high of 104.80, -0.15% on the day so far as the market brace for the US election outcome.  The US dollar is under pressure. DXY is down some 0.66% at the time of writing.  Markets have priced in a sweeping Democratic Party victory, or a so-called…