Latest
You are at:Home»Weekly Forex Forecasts»USD JPY Forecast»USD/JPY could go for 110 once again, if the world remains safe

The reaction to the US Non-Farm Payrolls tells the story of the whole week. The US gained 164,000 jobs in April, worse than 103,000 expected. Wages rose by only 0.1% MoM and 2.6%, both 0.1% short of expectations. The initial reaction was the “logical” one: the greenback retreated on the disappointment. Nevertheless, it found reasons to rise. The fall of the unemployment rate below 4% for the first time since 1972, the fall of the real unemployment rate, U-6, to 7.8% and other second-tier components were all cited as reasons to rise.

The real deal may be the positive momentum of the US Dollar that is an extension of the moves in April and also expectations that this will not stop the Fed from raising rates in June.

The US Dollar did take breathers during the week and failed to conquer 110, but the wind is still blowing in its sails.

Early in the week, the US Dollar continued moving higher thanks to ongoing elevated levels for US bond yields and the confirmation that the Fed’s favorite measure of inflation rose to 1.9%. The Core PCE is now a touching distance from the 2% target.

The FOMC decision already complicated matters. As expected, the Fed left the interest rate unchanged at 1.50% to 1.75% and sent a mixed message. They referred to the inflation target as “symmetric,” a wording that was perceived as allowing inflation to run a bit hot after an extended period of shortfalls. The description of the economy was cautious as growth was seen as moderating and household spending as moderate. More importantly, the team led by Jerome Powell removed the phrase saying that the outlook has improved.

The statement included the regular positive comments about the labor market but was all in all less hawkish than expected given the recent rise in inflation. The US Dollar reaction was mixed. The reference to the inflation target as symmetric was seen as the Fed tolerating higher inflation and the greenback dropped. However, this was shrugged off quite quickly, a similar reaction to the NFP later in the week.

Rising tensions between Iran and Israel were shortlived and had little impact on the safe-haven yen. The ongoing peace process in the Korean peninsula easily mitigated the Mid-East tensions. While these stories were on the backburner, they have not entirely disappeared.

US events: Inflation in focus

After a hectic start to May, the upcoming week is more moderate. The JOLTs job openings measure on Tuesday provides more insights about the labor market, but the figure is for March, lagging the April NFP. The first significant figure is the Producer Price Index published on Wednesday. Core PPI reached 2.7% YoY in March, a high level that implies inflation in the pipeline. A similar figure would keep the US Dollar bid.

The main event of the week is on Thursday: the Consumer Price Index. The data for March finally showed a bump up in annual inflation with the core figure jumping from 1.8% to 2.1%. This move up reflects the falling out of wireless charges in the data in the previous year. The question is: will inflation continue higher?

The figures for April are expected to provide some answers, but another leap is not on the cards. Headline CPI is projected to advance from 2.4% to 2.5% YoY and rise by 0.2% MoM. Monthly core inflation carries expectations for an increase of 0.2%, the same as in March. Core CPI is projected to increase by 0.2% MoM and decelerate to 1.9%. A drop under the round number may hurt the Dollar, while staying above it may push the greenback higher.

After wage inflation slightly disappointed, the importance of the Consumer Price Index rises once again. The market will ask if the figure above 2% in March was a one-off or a more significant increase.

On Friday, prices of imported goods are of interest but the last word of the week belongs to the University of Michigan’s Consumer Sentiment preliminary read for May. A small increase from 98.8 to 99.5 is projected. Better consumer spending indicates higher retail sales. 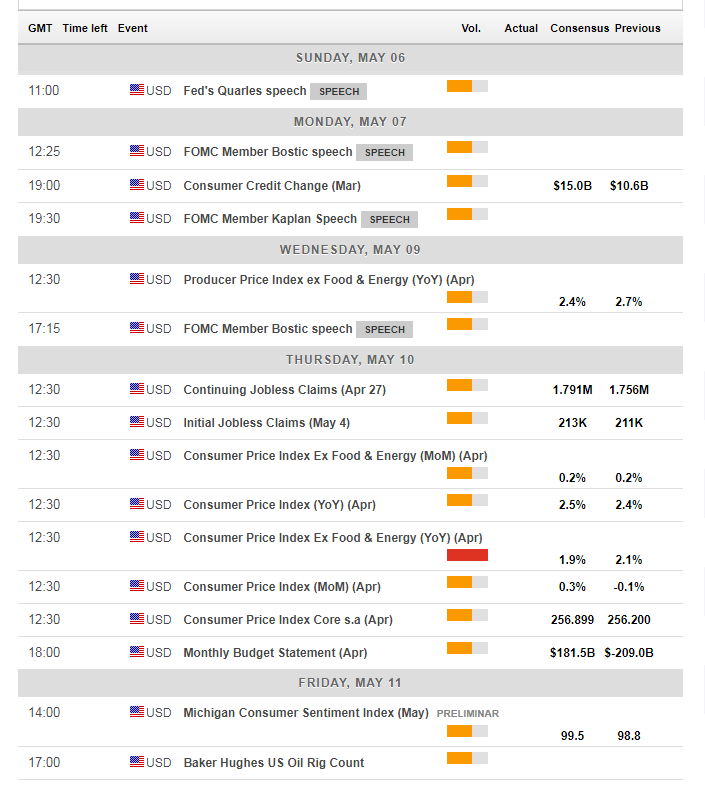 Japan: BOJ minutes and an open eye to geopolitics

The upcoming week in Japan starts with the Meeting Minutes from the Bank of Japan. The BOJ recently removed the timeframe to reach the 2% inflation target in the Fiscal Year 2019, and the meeting could shed some more light on the meaning of that decision. Later on, Leading Economic Index will be of some interest on Wednesday, and also foreign bond investments could feed into positioning.

As always, the Japanse yen remains sensitive to geopolitical developments. At the moment, things are calm around Syria after the event of early April. The focus is set to move from the proxy war between Israel and Iran over Syrian territory to Trump’s decision on the JCPOA, aka the deal with Iran. If the US abandons the agreement, the yen may see some flows. However, this is mostly priced in at this point.

Much closer to Japan, the two Koreas are taking measures toward peace. The removal of propaganda loudspeakers we have recently witnessed will likely be followed by further announcements and preparations for a Summit between North Korean Leader Kim Jong-un and US President Donald Trump, due late in the month or in early June.

And within Japan itself, the troubles for Prime Minister Shinzo Abe have not gone away. His declining popularity has not been the subject of media attention of late, but the topic may return soon. 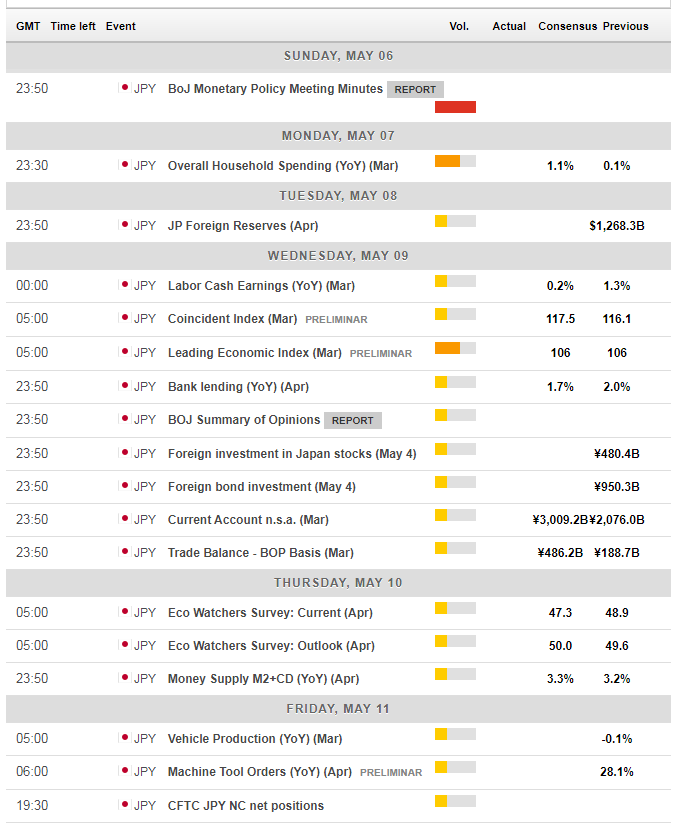 The bias on the USD/JPY remains bullish. The RSI is pointing higher, and Momentum is positive. The pair is trading between the 50-day Simple Moving Average and the 200-day SMA which is getting close to 110.

Looking down, the May 4th swing low of ¥108.63 is an immediate line of support. It is followed by ¥107.90 which capped the pair in mid-April and also in late February. The round number of ¥107 held the pair back in late March. 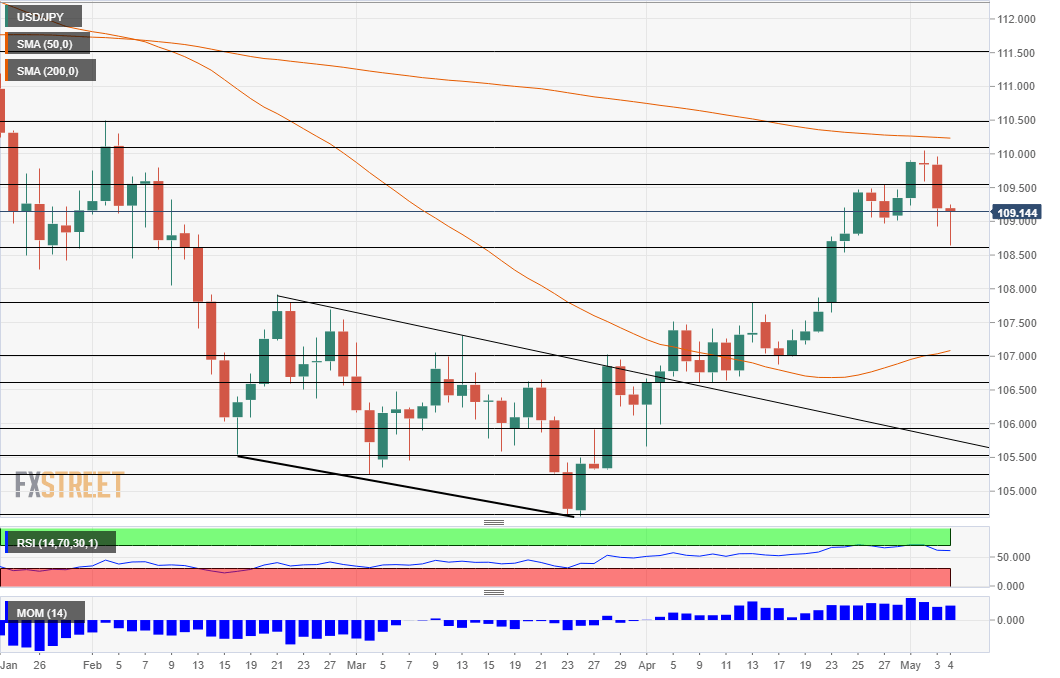 The trend remains to the upside, and the current consolidation moved the pair out of overbought territory. The Fed is still on course to raise rates in June, and the US economy continues outperforming its peers despite the recent hiccups. Nevertheless, it is important not to entirely dismiss geopolitical risks around Syria, the deal with Iran and Korea. A continued gradual rise remains the baseline scenario, assuming no nasty surprises.

The FXStreet FX Poll shows a bullish tendency on the pair, matching the opinions expressed here.

More: USD/JPY has massive support clusters and opts for the upside — Confluence Detector