Latest
You are at:Home»Weekly Forex Forecasts»USD JPY Forecast»USD/JPY is probably not aware of the trade war

Global themes had the most significant impact on the pair with the safe-haven yen rising on fear and falling on hopes.

Trade: The US announced it would implement the postponed steel and aluminum tariffs on the EU, Canada, and Mexico. The move sparked anger and an immediate retaliation by Canada. The EU is preparing an answer as well. The move joins US proposed tariffs against China. A worsening of trade relations is an adverse development for the global economy and a positive one for the safe-haven Japanese Yen.

US data: US Q1 GDP growth was revised down from 2.3% to 2.2%. The small disappointment was shrugged off, as the US economy is still doing quite well in comparison to its peers.

The Non-Farm Payrolls came out at 223,000 jobs gained, above expectations of 188,000 for May. Average Hourly Earnings increased by 0.3% MoM (above expectations for 0.2%) and 2.7% YoY (within projections). Yet the bigger story was Trump’s leak before the release. 69 minutes ahead of time, the President said he is looking forward to seeing the numbers, and this sparked an early US Dollar rally. When the numbers came out, the reaction was more muted.

Italy: The eurozone’s third-largest economy triggered a global sell-off in stocks and a rush to the Yen in thriller political drama. After the Italian President rejected a Euroskeptic candidate for the Finance Ministry, anger about foreign intervention reigned supreme, and the nation faced fresh elections that were seen by many as a plebiscite over EU membership. Italian bond yields soared, stocks crashed, and the Euro tumbled. The drama had a more positive twist as the two populist parties agreed with the President on a compromise. Italy avoids elections but a populist government may not only be a thorn for the euro-zone, but the risk of a breakup has global implications.

North Korea: The peace process took a positive turn that helped ease tensions. North Korean and US officials met in various capacities, and the leaders of North and South Korea also surprised the world with a second summit. Hopes are high for the reinstatement of the Kim-Trump Summit on June 12th in Singapore. The better tone pushed down the safe-haven yen.

BOJ JGB buying: The Bank of Japan made a small cut in its buying of 5-10 year Japanese bonds: from 450 to 430 billion yen. This pushed the yen marginally higher. Such a move had already happened, and markets are not worried that this is the beginning of the end of QE, at least not now.

US top-tier data had an impact, but the political stories had a broader impact.

After the Non-Farm Payrolls, it is always an anti-climax of sorts. The first full week of June starts off with Factory Orders which are often overshadowed by other figures and have their time in the sun this time. A drop is on the cards after a 1.6% rise beforehand.

The ISM Non-Manufacturing PMI on Tuesday is the highlight of the week. The publication usually precedes the Non-Farm Payrolls, and its employment component works as a hint toward the event. This time, it stands on its own. The forward-looking services sector survey disappointed with a drop to 56.8 points in April, indicating good, but not robust growth in the largest US sector. A small increase is projected now.

On Wednesday, the US is set to publish a high trade deficit, Non-Farm Productivity, and Unit Labor Costs. The latter figure provides another view on wage inflation. Higher labor costs indicate higher inflation in the pipeline. A repeat of 2.7% is on the cards. Thursday sees the regular weekly jobless claims. 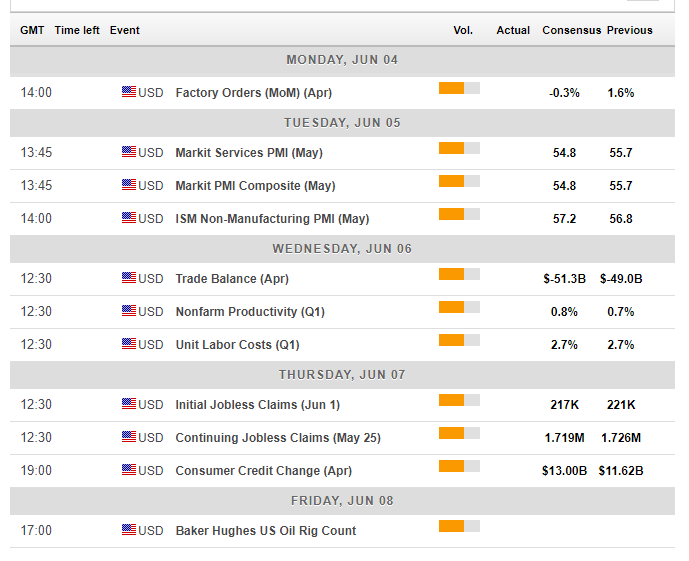 The not-so-dramatic economic indicators leave the stage to developments around trade. Any additional tariffs, retaliatory tariffs, break up of talks, or any unexpected move can cause storms in markets. An American delegation is going to China. Previous trips had mixed success. The announcement by Treasury Secretary Steve Mnuchin about putting trade wars on hold did not last too long.

The EU has a 30-day process before it imposes tariffs. The time may allow for negotiations. Also, NAFTA talks continue and so do other deliberations. Things can still be reversed, but the situation has certainly escalated.

Japan: BOJ in the back seat

The Japanese calendar is light. The Overall Household Spending figure on Monday may be of interest, especially after the drop of 0.7% in March. The first release of Q1 GDP showed a contraction of 0.2% q/q, the first in many quarters. We will now get a revision and changes are not uncommon. A move up to growth would be encouraging.

The BOJ will also be eyed for any additional tweaks to its bond-buying. The recent move was recently a one-off, but markets may get jittery if further modifications are made.

Another topic to watch out for is the political standing of Prime Minister Shinzo Abe. Scandals have sent his popularity plunging, and he may face a leadership challenge in September. Any signs that point to his ouster may boost the Yen, as Abe pushed for stimulus: directly enacting fiscal stimulus and indirectly encouraging monetary stimulus that hurt the Japanese currency in the past five years. 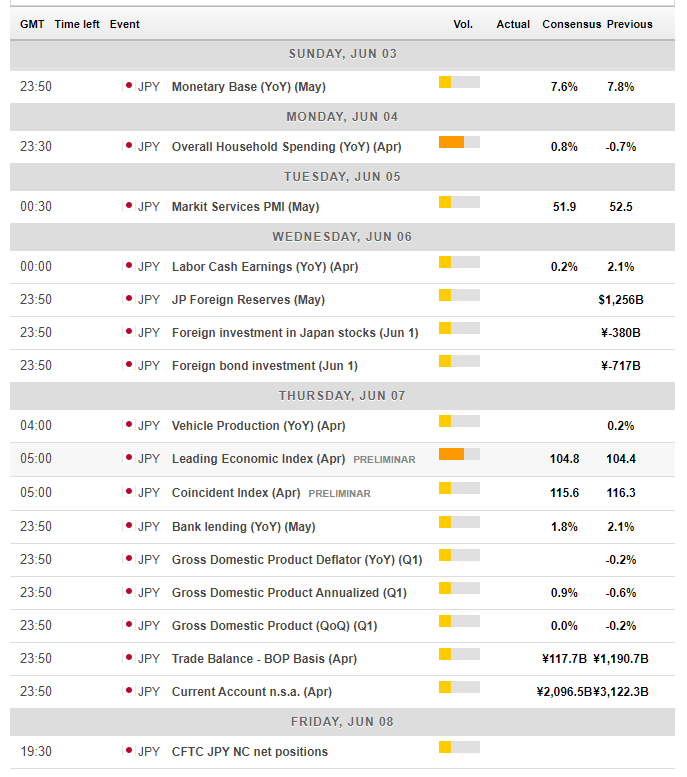 The uptrend is clearly broken but a downtrend is yet to emerge.

The technical picture for the pair is decidedly mixed. The RSI is around 50, indicating a lack of direction and also momentum is hard to find. The pair also trades between the 50-day and 200-day Simple Moving Averages. 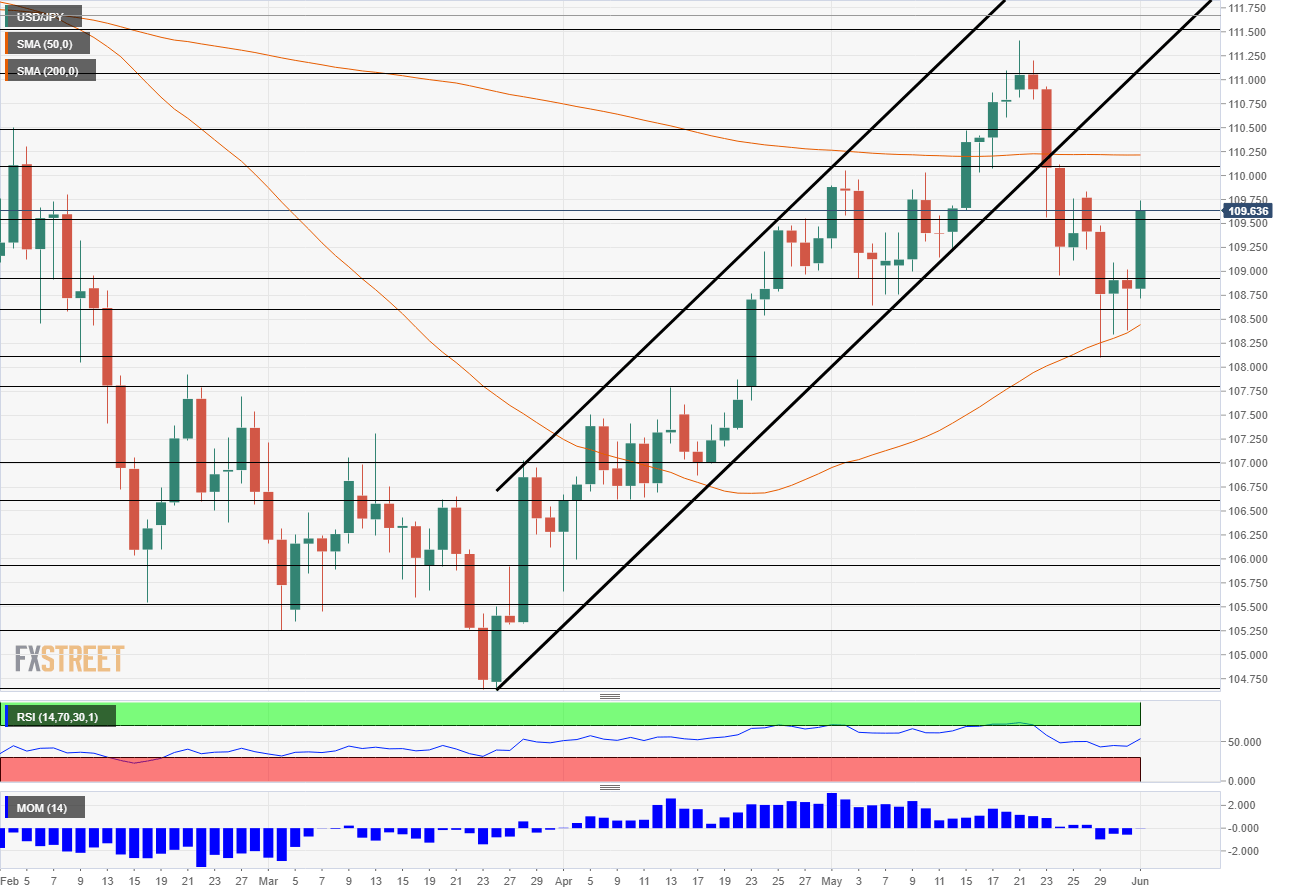 The escalation of trade tensions has not received enough attention. Unless the Trump Administration changes its mind, the safe-haven Yen could benefit from growing tensions even if further progress is made in North Korea. US data may go in either direction, and the Fed remains quiet. All in all, there is more room to the downside than to the upside for the USD/JPY.