Latest
You are at:Home»Weekly Forex Forecasts»USD JPY Forecast»USD/JPY may have gone too far, too fast, Trump-Putin Summit awaits

This was the week: Shrugging off trade, inflation is rising

After an extended period of listless trading, the USD/JPY finally made a move to the upside. Concerns about trade consisted of a significant part of the increases, as they were critical enough to lift the greenback but insufficient to send money into the safety of the Japanese Yen. The 180º shift of the US from the champion of free trade to protectionism may have broken correlations.

A clash between US President Donald Trump and his European counterparts in the NATO Summit did not affect markets, but trade had an impact.

The US is serious about imposing additional tariffs on China, worth no less than $200 billion. The news initially weighed on markets, but was shrugged off as China’s response was relatively moderate. The real battle will wait until late August when the duties will come into effect.

In the US, the Producer Price Index came out above expectations and helped the greenback. The more critical Consumer Price Index met expectations with an increase of 2.3% on Core CPI YoY, as expected, but still an acceleration. The case for a rate hike by the Fed in September remains firm.

Fed Chair Jerome Powell gave an interview and said that he “sleeps well at night,” sending an optimistic message about the economy and strengthening the case for four hikes in 2018. His words, alongside with a hawkish shift from his colleague Harker, also helped the US Dollar. Powell also said that concerns about trade are rising, but these words did not echo.

The upcoming week is front-loaded, with the essential events due already on Monday. President Trump meets his Russian counterpart Vladimir Putin in Helsinki. The encounter is closely watched by the world, which wants to see how close they are and if Trump continues bashing traditional allies on trade. Any adverse market reaction could weigh on the pair.

The second significant event is a recurring one: the publication of US Retail Sales. The US economy is centered around the consumer. The release for May was quite upbeat and unleased US Dollar strength. The headline advanced by 0.9%, sales excluding autos jumped by 0.9%, and the all-important Control Group rose by 0.5%, all above early estimates. Forecasts for June also point to advances on all measures.

Tuesday sees the publication of Industrial Production that disappointed with a drop last time. Housing data are published on Wednesday. To see a meaningful response, both Housing Starts and Building Permits need to go in the same direction: either beating or falling below expectations. On Thursday, Jobless Claims are projected to remain at low levels. More interestingly, the Philly Fed Manufacturing Index fell sharply and had an outsized impact on the greenback back in June. It will likely receive more attention now. 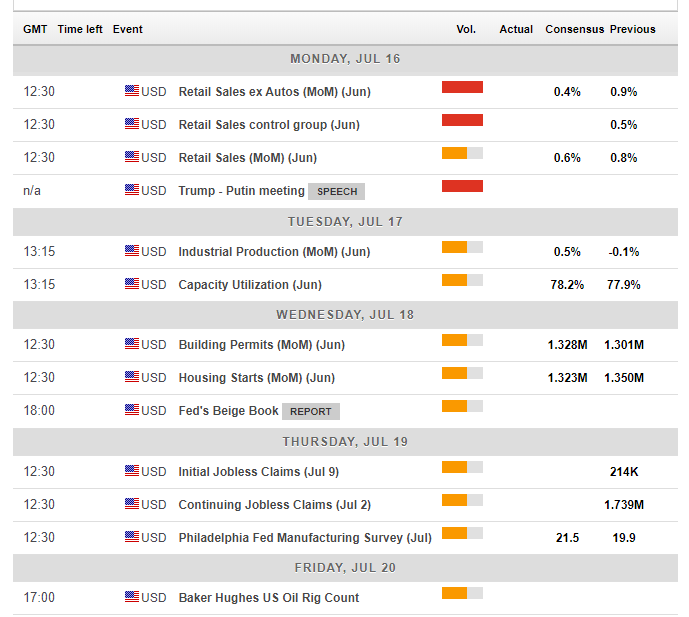 As the markets took Trump’s latest tariff talk on China with a stride, the Yen is not as safe as it used to be. The US Dollar, backed by a central bank that raises rates, is rising as a safe haven currency. Will this last? A lot depends on reactions in American stock markets. Equities in Asia and especially in China have been falling, but without a substantial downfall in the S&P, it is hard to see the USD/JPY reacting in a meaningful manner to trade concerns.

In Japan, the trade balance numbers and National Inflation may have an impact. The Tokyo numbers are published before the nationwide ones, limited the volatility. Inflation remains low in Japan, and the Bank of Japan is far from reaching its 2% core inflation target. 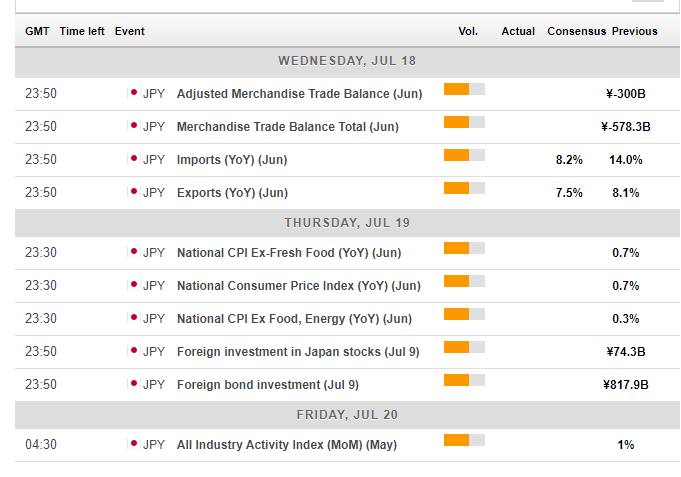 The USD/JPY has reached overbought territory. The Relative Strength Index is above 70, indicating stretched levels and a potential for a substantial correction. Momentum points up but is not as strong as it used to be in May. On the other hand, the pair is trading above the 50-day and 200-day Simple Moving Averages, with the 50 about to cross the 200, a bullish sign.

Looking up, 113.40 capped the pair in early January and is also the 2018 peak. It is closely followed by 113.70 which held the pair down in December. Much higher above, 114.70 served as resistance for the USD/JPY back in November.

On the downside, we find some support at 112.10 which was a triple-bottom during December and January. Lower, 111.40 was the peak in May and now reverses its roles. 111.15 was a temporary cap in early July. Another step to the downside, 110.75 was a swing high in late June.

The Yen has not behaved like a classic safe-haven even though commodity currencies are falling, as would be expected in an adverse environment. On the other hand, the pair made a considerable move to the upside and may take a breather before the next step. We may see some consolidation before the next moves.

Get the 5 most predictable currency pairs
Previous ArticlePBOC’s Xu: China’s fiscal policy has room to support the economy
Next Article Bitcoin Gold price analysis: BTG/USD recovery fireworks in play; jumps over 6% on Friday