Latest
You are at:Home»FXStreet News»USD/JPY Price Analysis: Clings to gains near 200-hour SMA, around 105.35-40 region

The USD/JPY pair showed some resilience below the key 105.00 psychological mark and staged a modest recovery from one-and-half-week lows set earlier this Tuesday. The pair, for now, seems to have snapped four consecutive days of the losing streak, albeit lacked any strong follow-through buying.

A goodish US dollar rebound from six-week lows was seen as a key factor that extended some support and assisted the pair to gain some positive traction. However, a turnaround in the global risk sentiment underpinned the safe-haven Japanese yen and kept a lid on any further gains for the USD/JPY pair.

From a technical perspective, the recent positive move from multi-month lows touched in January has been along an upward sloping channel. The formation points to a well-established short-term bullish trend, which, along with the emergence of some dip-buying, supports prospects for a further appreciating move.

The constructive outlook is reinforced by the fact that technical indicators on the daily chart are still holding in the bullish territory. Hence, a subsequent strength back towards an intermediate hurdle near the 105.70 horizontal zone, en-route the 106.00 round-figure mark, now looks a distinct possibility.

On the flip side, the 105.00-104.90 region (ascending channel support) should continue to protect the immediate downside. A sustained breakthrough will negate the near-term bullish bias and prompt some aggressive technical selling, turning the USD/JPY pair vulnerable to slide back towards the 104.40 area.

The downfall could further get extended towards the 104.00 round-figure mark before the USD/JPY pair eventually drops to the 103.45 support area. The next relevant downside target would be the 103.00 round-figure mark ahead of YTD lows, around the 102.60-55 region touched on January 6. 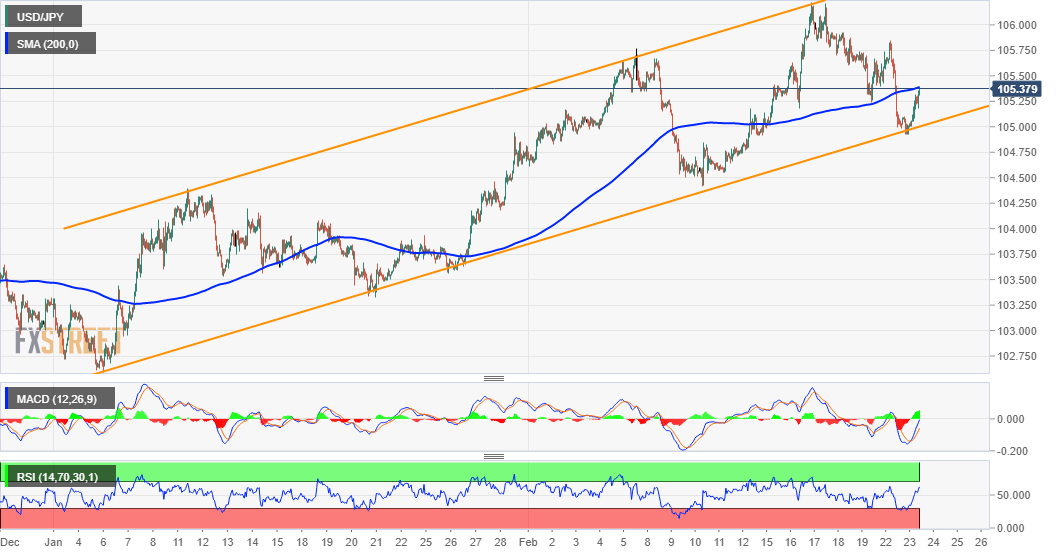 Get the 5 most predictable currency pairs
Previous ArticleS&P 500 Index: Below 3885 confirms a correction lower towards 3819/17 – Credit Suisse
Next Article US: Philly Fed Nonmanufacturing Index rises to 3.9 in February from -17.5