The Canadian dollar made significant gains and is only 28 pips away from parity, as the US dollar was on the retreat. Gross Domestic Product is the highlight of this week. Here is an outlook on the major market-movers and an updated technical analysis for USD/CAD.

Last week: Canadian retail sales rose less-than-expected in May gaining 0.3% amid larger sales volume and food purchases.   However May’s release came after   0.6% decline in April. Meanwhile Core sales excluding motor vehicle and parts climbed 0.5% beating expectations for a 0.1% gain. On the whole, these are good results which will hopefully contribute to the GDP this week.

Updates: The loonie has been creeping towards  the parity line, as  USD/CAD was trading at 1.0037.  Canadian GDP, a key indicator, will be released on Tuesday. USD/CAD is choppy, as the loonie moved closer to the parity line. The pair was trading at 1.0017. GDP came in with a very modest 0.1% gain, slightly below the estimate of 0.2%. Manufacturing Indexes were a big disappointment. RMPI sagged by 4%, surprising the markets, which had forecast a much more moderate decline of 1.5%. This was the sharpest decline in over one year. IPPI was also well below the market forecast of 0.6%, posting a 0.3% decline. This was the first reading in negative territory since January. USD/CAD remains steady, trading at 1.0018. After trading in the 1.0050 range, the loonie has edged downwards. USD/CAD was trading at 1.0029. 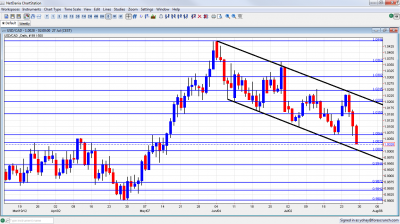 Dollar/C$ started the week with a move upwards, conquering the 1.02 line  (discussed  last week)  for a short time. This didn’t last and the pair then descended and fell down to 1.0028. The break of the 1.0030 line  is not confirmed yet.

1.0150 was a swing low in September and worked as resistance several times afterwards. It was challenged in June 2012. and served as a separator in July 2012. This line is somewhat weaker at the moment.

1.0066 was key support before parity. It’s strength during July 2012 was clearly seen and it gave a fight before surrendering. 1.0030 is another line of defense before parity after capping the pair earlier in the year. The move below this line is not confirmed yet.

The very round number of USD/CAD parity is a clear line of course, and the battle is renewed after the recent climb.  Under parity, we meet another pivotal line at 0.9950. It served as a top border to range trading in March 2012 and later as a line in the middle of the range.

As you can see on the graph, the pair is trading in a downwards channel that began at the beginning of June. Downtrend support is more significant than downtrend resistance. It’s important to note that the pair is close to support now.

This is a very interesting week: no QE3 in the US could help the US dollar, while a strong move from Draghi in Europe could help the Canadian dollar. The tipping point in favor of the C$ is the GDP figure, which will likely show that Canada is outperforming.

The Canadian dollar made significant gains and is only 28 pips away from parity, as the US dollar was on the retreat. Gross Domestic Product is the highlight of this week. Here is an outlook on the major market-movers and an updated technical analysis for USD/CAD. Last week: Canadian retail sales rose less-than-expected in May gaining 0.3% amid larger sales volume and food purchases.   However May's release came after   0.6% decline in April. Meanwhile Core sales excluding motor vehicle and parts climbed 0.5% beating expectations for a 0.1% gain. On the whole, these are good results which will…