Last week, the BOC acknowledged the European worries, however continued to see  the  glass half full, by announcing that Canadian economy is growing in line with predictions and that the labor market is continuing to improve. Will Canadian economy live up to expectations despite global uncertainty?

Updates: There were a host of economic releases late last week, most of which were below the market forecast. PMI looked very sharp, coming in at 60.5 points, easily beating the estimate of 53.5. Housing Starts was a disappointment, falling sharply to 211 thousand units. The forecast stood at 226K. Employment Change was also below the market forecast. The indicator came in at 7.7 thousand newly employed people, well below the prediction of 10.0K. Trade Balance posted a weak reading of -0.2 billion, the first monthly deficit since December 2011.The Unemployment Rate remained at 7.3%, matching the market forecast. The quarterly Labor Productivity release came in at 0.1%, falling below the  estimate of 0.3%.  USD/CAD was trading at 1.0244. There are no releases this week until Thursday. The loonie was down, as the pair was trading at 1.0273. After breaking the 1.03 line, USD/CAD has retraced. The pair was trading at 1.0258. With a host of releases due out of the US today, including Retail Sales and PPI, we could see further movement from the pair. USD/CAD continues to drift, as the pair was trading at 1.0261. NHPI and Capacity Utilization Rate will be released later on Thursday. 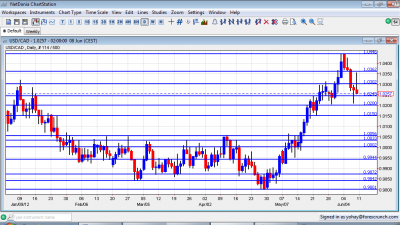 1.0360 was a pivotal line in June 2012 and is now significant resistance. The round number of 1.03 was resistance at the beginning of the year and now returns to this role. 1.0245 served as a separator for the move up when the pair rallied in May 2010 but is weaker now.

The round figure of 1.02 was a cushion when the pair dropped in November, and also the 2009 trough. It is weaker now but remains pivotal after being broken. 1.0150 was a swing low in September and worked as resistance several times afterwards.

The very round number of USD/CAD parity is a clear line of course, and the battle is renewed after the recent climb.

Under parity, we meet another pivotal line at 0.9950. It served as a top border to range trading in March 2012 and later as a line in the middle of the range.

The relative hawkishness of the BOC in the face of a global storm provides some support for the loonie. Also strong employment figures help. On the other hand, the high uncertainty and the lower chances of QE3 weigh on the pair. The balance will likely continue until the Greek elections.

The Canadian dollar finally broke the losing streak against the greenback, but USD/CAD is still not too close to parity. NHPI and Manufacturing Sales are the main market movers this week. Here's an  outlook  for the Canadian events and an updated technical analysis for the Canadian dollar. Last week, the BOC acknowledged the European worries, however continued to see  the  glass half full, by announcing that Canadian economy is growing in line with predictions and that the labor market is continuing to improve. Will Canadian economy live up to expectations despite global uncertainty? Updates: There were a host of economic…