A busy week expects loonie traders, with a rate decision, retail sales and inflation numbers among others. Here’s an outlook for the Canadian events, and an updated technical analysis for USD/CAD. 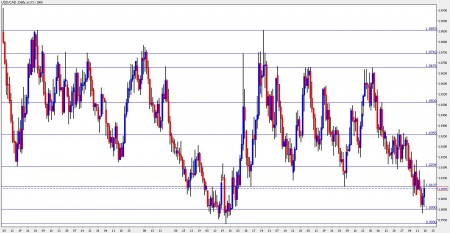 USD/CAD was reached in the past week, but yet again, it didn’t hold. Will this happen again? Or will the dollar recover? Let’s start:

At the beginning of the week, USD/CAD continued the trend from the previous week and continued descending, dropping below parity for the first time since April. It then bounced back up and eventually closed at 1.0098, higher than last week’s close.

At the current close, the 1.01 line continues to serve as resistance. This was a low point in August and worked as a pivotal point now.  1.02, which was the 2009 low, is the next resistance line.

The 1.0350 line is a very strong resistance line on the upside. It capped the pair several times in recent months.  Higher, 1.05 held the pair twice during August is a tough line..

Looking down, there aren’t  many lines: the pair is still close to the ultimate support line – parity. Below 1, the next line of support is 0.9930.

I turn from neutral to bullish on USD/CAD.

With quantitative easing already well priced into the greenback, and with a probably pause in rate hikes, the Canadian dollar is set to lose ground, especially as Canadian employment isn’t that good.

A busy week expects loonie traders, with a rate decision, retail sales and inflation numbers among others. Here's an outlook for the Canadian events, and an updated technical analysis for USD/CAD. USD/CAD  daily chart with support and resistance lines marked. Click to enlarge: USD/CAD was reached in the past week, but yet again, it didn't hold. Will this happen again? Or will the dollar recover? Let's start: Foreign Securities Purchases:  Monday, 12:30. The total value of purchases from foreigners serve as a gauge of confidence in the Canadian economy. After  topping  23 billion three months ago, the figure dropped to…