Latest
You are at:Home»Majors»USD/JPY Outlook – February 21-25

The dollar fell for a second day versus the yen as U.S. consumer prices rose more than forecast in January and initial jobless-benefit claims increased more than estimated last week. This situation weighs on Japan’s export growth. 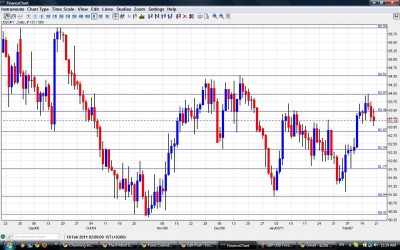 Dollar/yen had a strong start to the week, and it bounced at 84, a new line that didn’t appear last week. It then fell back and closed at 83.18.

Looking down, the 82.87 line, where the BOJ intervened is the first line of support.. 82.34 now has a bigger role after giving a hard time to the pair.

Lower, 81.80 is of importance after serving as  support in recent weeks. The next line is even more important – 80.87, which provided support back in November and now has the same role.

Looking up, 83.40 provides immediate resistance, though weaker than in previous weeks. 84, which was quite stubborn now, is a tough line of resistance.

Higher, the next line above is 84.50 which is the highest level since October and is a very tough resistance line. Above, 85.93 was the top that the pair made after the BOJ intervention in September.

Further above, we have 86.34 and 87.02, which were support lines on the way down, and now work as minor resistance.

Above, strong resistance is found at 88.12, which worked in both direction last summer, and then by 89.15 which capped USD/JPY at that same period

I remain bullish on USD/JPY.

A stronger American economy, a struggling Japanese one should push the pair higher. Note the correlation between US bond yields and the pair. While weaker than earlier in the year, it is still relevant.