VeChain Price Prediction: VET at the last line of defense

VeChain price has constructed a similar pattern to Dogecoin price, highlighted by a rounding formation since the May 23 low. The bearish construct supplemented by signs of distribution elevates the negative VET outlook and increases the odds of a test of the 200-day SMA moving forward.

VeChain price frustrated by a lack of investor conviction

VeChain price has not been invigorated by the Bitcoin price burst over the last week, maintaining a slight wedge higher along a support line extending back to May 30. There is potential for the drift higher to continue, given the lack of decisiveness among altcoins in general. However, the weight of a declining 50-day SMA and the lack of accumulation during the last three weeks promotes  an inclination to be cautious on VET.

VeChain price, unlike other rebel coins, currently trades near viable support levels, including the anchored volume weight average price (anchored VWAP) at $0.088 and the strategically important 200-day SMA at $0.083 thereby preventing a complete unraveling of VET if the support breaks.

A trade below $0.094 will confirm that VeChain price is resolving to the downside, with immediate targets being the anchored VWAP and 200-day SMA, delivering a 21% decline from the current price. Should selling accelerate, VET could sweep the May 23 low of $0.065. However, suppose the selling is accompanied by a broader breakdown in the cryptocurrency market. In that case, the digital asset could convincingly break below $0.065 and activate a new bearish narrative focused on the May 19 low of $0.042. 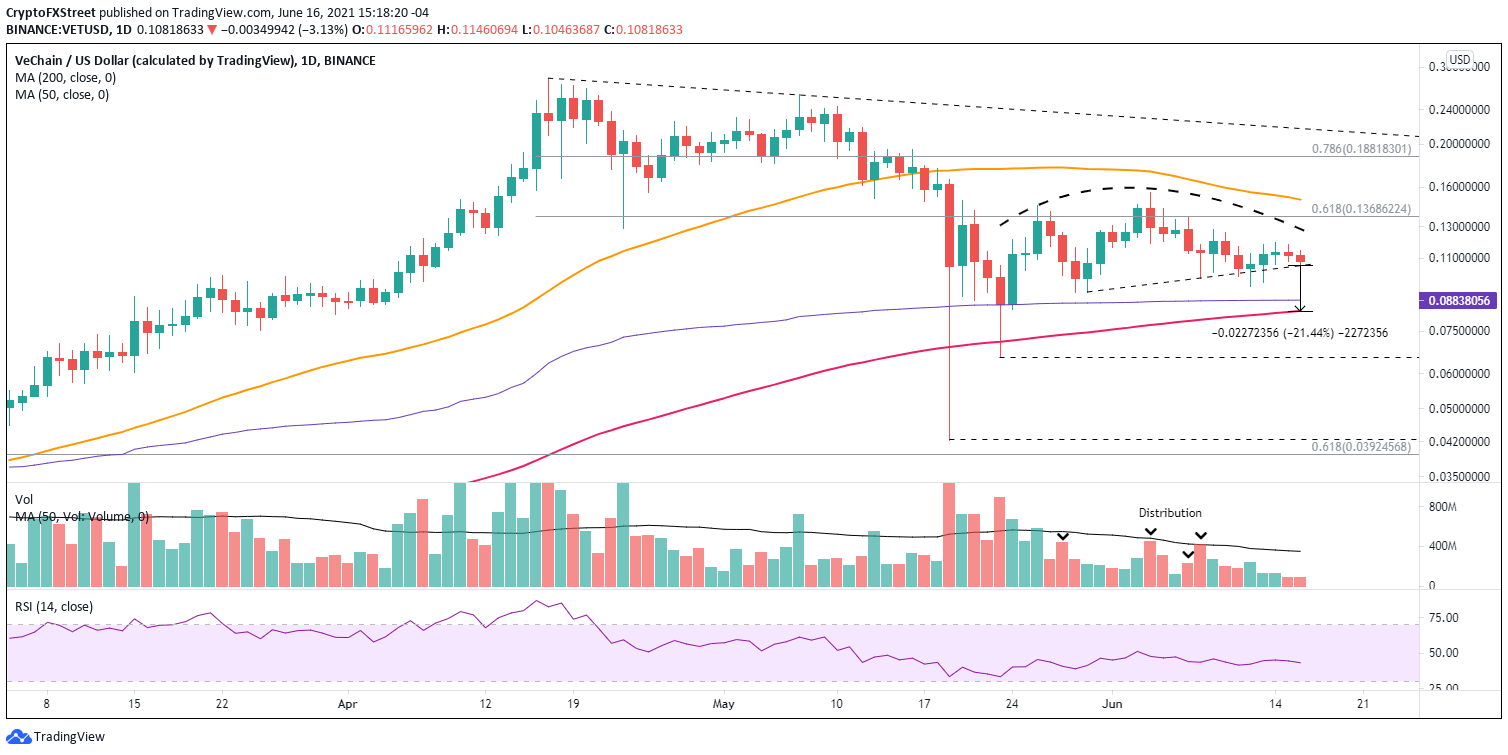 Cryptocurrency markets are constantly surprising investors, and it is imperative to consider the other side of the trade. A daily VET close above $0.119 will neutralize the bearish stance and potentially put VeChain price on a  path towards the 61.8% Fibonacci retracement of the April-May correction at $0.136, a level that was noteworthy resistance in late May and early June.

VeChain price is in search of a catalyst to break with the recent consolidation. It should have been the Bitcoin rally, but there is a heightened level of risk aversion since the May collapse, and altcoins appear to carry a higher risk profile than the flagship cryptocurrency.

VeChain price rests at the support of a complex topping process originating on May 23. Anchored VWAP and 200-day simple moving average (SMA) may create a buffer against a test of the May 23 low. VET volume profile shows points of distribution during the topping process. VeChain price has constructed a similar pattern to Dogecoin price, highlighted by a rounding formation since the May 23 low. The bearish construct supplemented by signs of distribution elevates the negative VET outlook and increases the odds of a test of the 200-day SMA moving forward. VeChain price frustrated by a lack of investor…