“Indicator of economic sentiment points to a significant deterioration in the outlook for the German economy” – says ZEW institution after publishing its devastating figures for August. The Economic Sentiment has plunged to -44.1 – the lowest since 2011. Moreover, the Current Situation gauge dropped to -13.5 – the worst since 2010. Both figures have fallen below expectations.

Germany is considered the “locomotive” of the euro-zone – and it is derailing and depressing the common currency. ZEW has pointed out several issues with the recent US-Sino trade escalation topping the list. The People’s Bank of China fixed the yuan above market expectations – but lower once again. The gradual decline has been angering the US which sees it as a competitive devaluation.

The world’s largest economies have also been clashing around Hong-Kong. Authorities in the city-state canceled flights on Tuesday after demonstrators stormed the airport. Chinese police have been amassing in the neighboring city of Shenzhen in an apparent threat. US Senate leader Mitch McConnell warned that any violent crackdown would be “completely unacceptable.” Events in the financial hub are also part of the tensions. At the moment, both sides still plan to meet for high-level trade talks in September, but markets are becoming doubtful that a deal will be made.

Stocks are falling and investors are rushing into the safety of bonds The German 10-year bond yield is at -0.61% and the whole yield curve is in negative territory. US bonds are also struggling with the 10-year Treasury yield standing at around 1.64%. The fall in US yields implies the Federal Reserve will cut rates and has weighed on the dollar.

The next move by the  Fed  depends also on subdued inflation – and that will come to a test later today. Core Consumer Price Index (CPI) is projected to remain at 2.1% on an annual basis. Any change may significantly shake the greenback.

One topic that has moved to the back burner is Italian politics. The Senate in the euro zone’s third-largest economy has postponed the no-confidence vote and politicians are still scrambling to prevent an early election. Leading candidate Matteo Salvini may clash with the EU over the budget – during the campaign and potentially as prime minister. Any comments on the budget may bring the topic back to the spotlight.

All in all, today’s trading will likely be influenced by both politics and economic data. 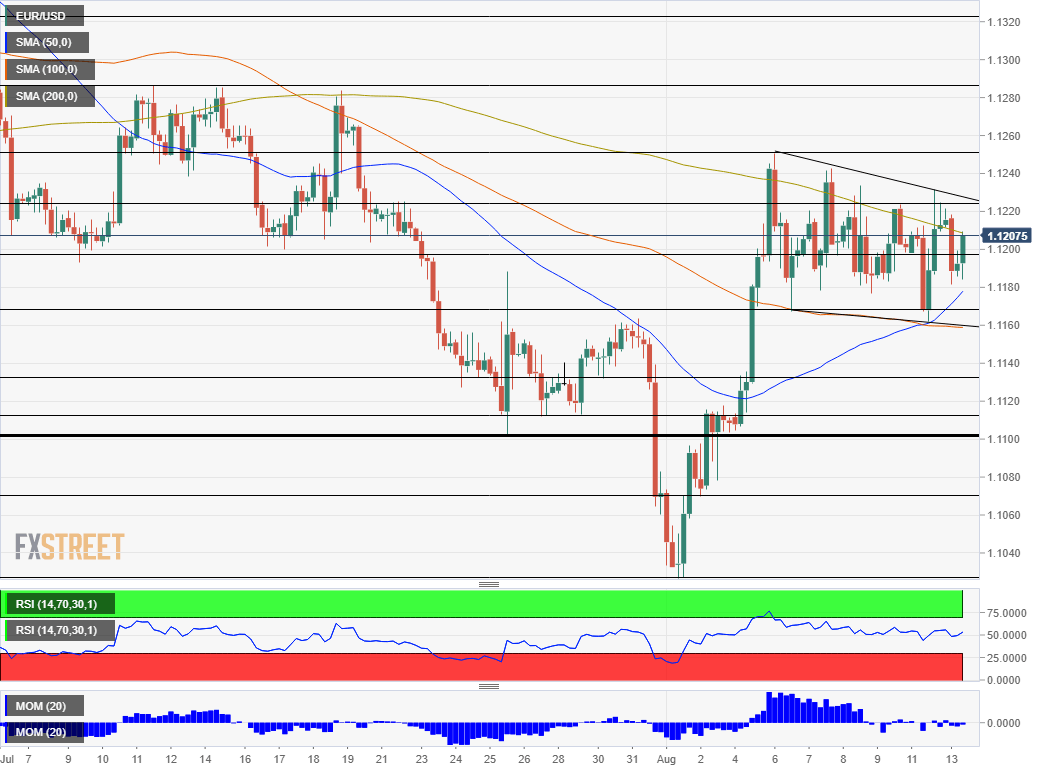 EUR/USD  is setting lower highs and lower lows – a bearish sign. While downtrend resistance and downtrend support are not parallel, they are both pointing down. Other  indicators  are mixed – momentum and the Relative Strength Index (RSI) remain stable while the pair is trading close to the 50, 100, and 200 Simple Moving Averages. 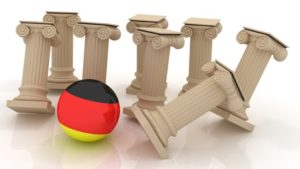 EUR/USD is struggling to settle above 1.1200 amid depressing German data. Trade tensions, US inflation, and Italian politics are also set to dominate trading. Tuesday's four-hour chart is signaling falls for the pair. "Indicator of economic sentiment points to a significant deterioration in the outlook for the German economy" - says ZEW institution after publishing its devastating figures for August. The Economic Sentiment has plunged to -44.1 - the lowest since 2011. Moreover, the Current Situation gauge dropped to -13.5 - the worst since 2010. Both figures have fallen below expectations. Germany is considered the "locomotive" of the euro-zone -…