Home » What you need to know as markets open: Pompeo and Trump ratcheted up US and China tensions

What you need to know as markets open: Pompeo and Trump ratcheted up US and China tensions

We are walking into early Asian markets on Monday swamped in headlines surrounding COVID-19 while millions of people over the world are forced to adjust to life without a stable income for the foreseeable future in a global economic disaster.

As China moves into a post dystopian post-lockdown world, scientists are working to find a vaccine for the virus, yet weekend stories are of growing numbers of COVID-19 cases as the Johns Hopkins latest count tallies almost 3.5 million word-wide cases. However, COVID-19 is not the only thing spreading – the internet is awash with misinformation and conspiracy theories – so when you hear heads of the US, including the U President Donald Trump and the Head of Secretary, Mike Pompeo, discussing how the virus could have begun in a Chinese laboratory, you make a double-take and read on a lot closer.

Mike Pompeo, was interviewed on ABC’s This Week which started with a clip of Trump “discussing an unsubstantiated theory that the coronavirus outbreak began in a laboratory in Wuhan, China. This comes amid new reports that US intelligence now believes the Chinese government concealed the severity of COVID-19 from the international community in early January.”

The interviewer then asked Pompeo, “with intelligence officials, as we mentioned, saying that the Chinese government intentionally concealed the severity of COVID-19 from the international community in early January, while it stockpiled medical supplies.

In terms of international concealing, I assume you think they did that intentionally to keep as many masks for themselves as possible. Will there be some sort of retaliation?”

You’ve got the facts just about right. We can confirm that the Chinese Communist Party did all that it could to make sure that the world didn’t learn in a timely fashion about what was taking place.

There’s lots of evidence of that. Some of it you can see in public, right?

We’ve seen announcements. We’ve seen the fact that they kicked the journalists out. We saw the fact that those who were trying to report on this, medical professionals inside of China, were silenced. They shut down reporting — all the kind of things that authoritarian regimes do, the way Communist parties operate. This is a classic Communist disinformation effort.

That created enormous risk, and now you can see hundreds of thousands of people around the world, tens of thousands in the United States, have been harmed.

President Trump has been very clear. We’re going to hold those responsible accountable, and we’ll do so on a timeline that is our own.

During the interview, a clip was shown of Trump again, asked the question, “Have you seen anything at this point that gives you a high degree of confidence that the Wuhan Institute of Virology was the origin of this virus?” Trump replied,

The interviewer asked, “And, Mr. Secretary, have you seen anything that gives you high confidence that it originated in that Wuhan lab?”

There’s enormous evidence that that’s where this began. We’ve said from the beginning that this was a virus that originated in Wuhan, China. We took a lot of grief for that from the outset. But I think the whole world can see now.

Remember, China has a history of infecting the world, and they have a history of running substandard laboratories. These are not the first times that we’ve had a world exposed to viruses as a result of failures in a Chinese lab.

And so, while the intelligence community continues to do its work, they should continue to do that, and verify so that we are certain, I can tell you that there is a significant amount of evidence that this came from that laboratory in Wuhan.

There was then some confusion as to whether Pompeo believes it was man-made or not. Pompeo gave inconsistent replies to the same question asked in a different format, so he then said the following: “you have to put this in context. Here’s what — here’s what’s important”…

Here’s what’s important. The Chinese Communist Party had the opportunity to prevent all of the calamity that has befallen the world. And here we find ourselves today — you and I were talking about we haven’t seen each other physically for a long time. That’s true of people all across the world.

This — this is an enormous crisis, created by the fact that the Chinese Communist Party reverted to form, reverted to the kinds of disinformation, the kinds of concealment that authoritarian regimes. Had those scientists been operating in America, they would have put this out. There would have been an exchange of ideas. And we would have quickly identified the kinds of things that needed to be done in response.

Instead, China behaved like authoritarian regimes do, attempted to conceal and hide and confuse. It employed the World Health Organization as a tool to do the same. These are the kind of things that have now presented this enormous crisis, an enormous loss of life and tremendous economic cost, all across the globe.

The Australians agree with that. You hear the Europeans beginning to say the same thing. I think the whole world is united in understanding that China brought this virus to the world.

Finally, when the interviewer asked whether Pompeo believed that the Chinese intentionally released that virus or it was an accident in the lab, he replied:

You know, I don’t have anything to say about that. I think there’s a lot to know. But I can say this. We’ve done our best to try and answer all of those questions. We tried to get a team in there. The World Health Organization tried to get a team in there. And they have failed. No one’s been allowed to go to this lab or any of the other laboratories — there are many labs inside of China, Martha. This risk remains.

This is an ongoing challenge. We still need to get in there. We still don’t have the virus samples we need. This is an ongoing threat, an ongoing pandemic. And the Chinese Communist Party continues to block access to the Western world, the world’s best scientists, to figure out exactly what happened.

So I can’t answer your question about that. Because the Chinese Communist Party has refused to cooperate with world health experts.

This escalation of accusation should hang over markets like a guillotine on a thread. We have seen a 61.8% retracement in the S&P500 – the golden ratio target. Could this technical picture combined with what appears to be the birth of a tornado of geopolitical risk be the trigger for the start of an unprecedented meltdown of financial markets?

Tradewars are back in play and geopolitics are at there worst since WW2. In trying to get back to work, nations around the world and some US states are pushing the envelope in an experiment that could trigger the next outbreak of a stealthy killer virus. We are surly-looking down the barrel of a gun pointed at the head of a fragile global economy with the finger firmly on the trigger. If that trigger is pulled, it could be the spark that ignites a major global economic depression hat no central bank or government will be able to react fast enough to prevent. Markets could well follow suit of Friday’s dreadful close on Wall Street along with the very same notion. 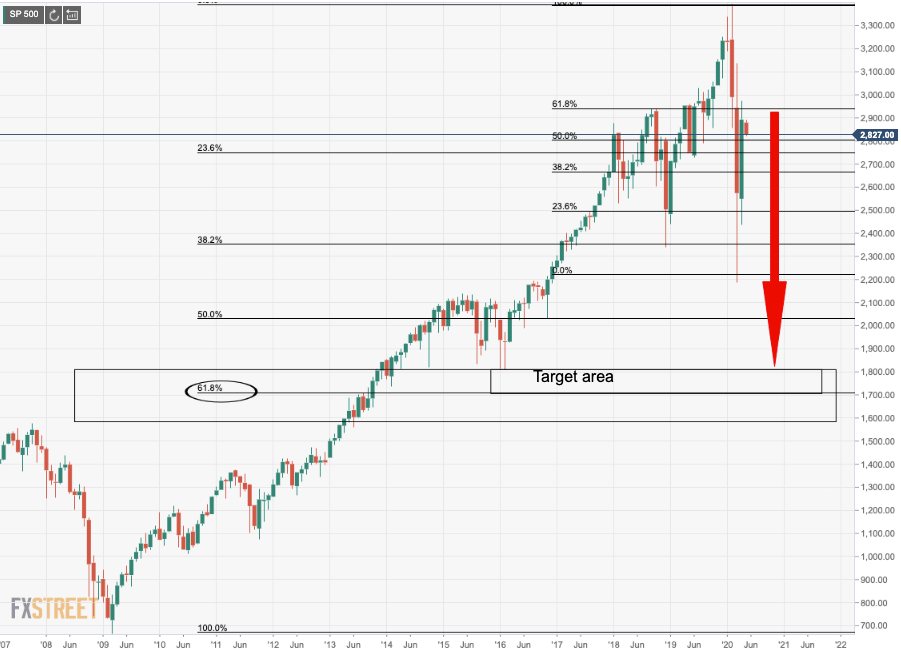 While we can not predict the future of any market, there are compelling arguments for the foreseen outcome of all of this pictured in the chart of the S&P 500 displayed above.

Rallies are just low hanging fruits for the bears

In the build-up to such a move, we would expect to see a build-up of technical topping formations over the coming weeks/months ahead which would be the basis for a H&S reversal pattern. This pattern could form as the markets struggle to breach into the psychological 3,000 mark, capped in the vicinity of the 618% Fibo on upside attempts falling as low hanging fruit for hungry bears.

Between now and when the final shot is fired sending global equities off the cliff, further escalations of geopolitical risks will likely weigh heavily on FX currencies such as AUD, linked closely to commodity prices as well as EM-FX. The US dollar would be expected to be high up on the list, if not at the top, of FX in demand. AUD/JPY is usually a safe play to sell on rallies in a financial markets calamity whereas gold would be expected to attract flows of money in search of a safe haven.

Geopolitical risks should be at the forefront of the markets. An underbelly of risk-off cold be on the cards for the open. We are walking into early Asian markets on Monday swamped in headlines surrounding COVID-19 while millions of people over the world are forced to adjust to life without a stable income for the foreseeable future in a global economic disaster.  As China moves into a post dystopian post-lockdown world, scientists are working to find a vaccine for the virus, yet weekend stories are of growing numbers of COVID-19 cases as the Johns Hopkins latest count tallies almost 3.5 million word-wide cases. However, COVID-19 is not…