Home » What you need to know before markets open: Eyes on USD/JPY test below trend-line support

What you need to know before markets open: Eyes on USD/JPY test below trend-line support

As explained in  depth within today’s,  Asia open: Recap of latest developments  as  risk-on tones emerge, the focus has been trade-headlines and Brexit as investors  seek clarity on both fronts before the year is out.  The purpose of this article is to highlight key macro and technical analysis in associated currencies ahead of today’s market open.

Brexit in focus, Tory party in the lead, (GBP positive)

The main developments have been an increase in  the margin between the Labour party and the Tory party  leading the polls. Analysis  by Datapraxis of 270,000 voter interviews conducted by YouGov which has predicted the Conservatives will win 349 seats on December 12 while Jeremy Corbyn’s party is set to lose 30 seats and potentially end up with just 213 MPs – This is surely a positive for GBP, (recently suffering strength in the dollar on Friday  amid positive US data and dismal domestic manufacturing and services activity).

Casting minds back, cable was seen above 1.30 the figure back on the 21st October on the sentiment that a Brexit deal will finally be done when Boris Johnson wins the elections and subsequent votes in his government backing the deal which has been agreed with the European Union. From a technical perspective, the pair is holding at the 23.6% retracement of its October rally, but a break below there, bears will still likely face potential  bids at channel support in the 1.2760 regions. 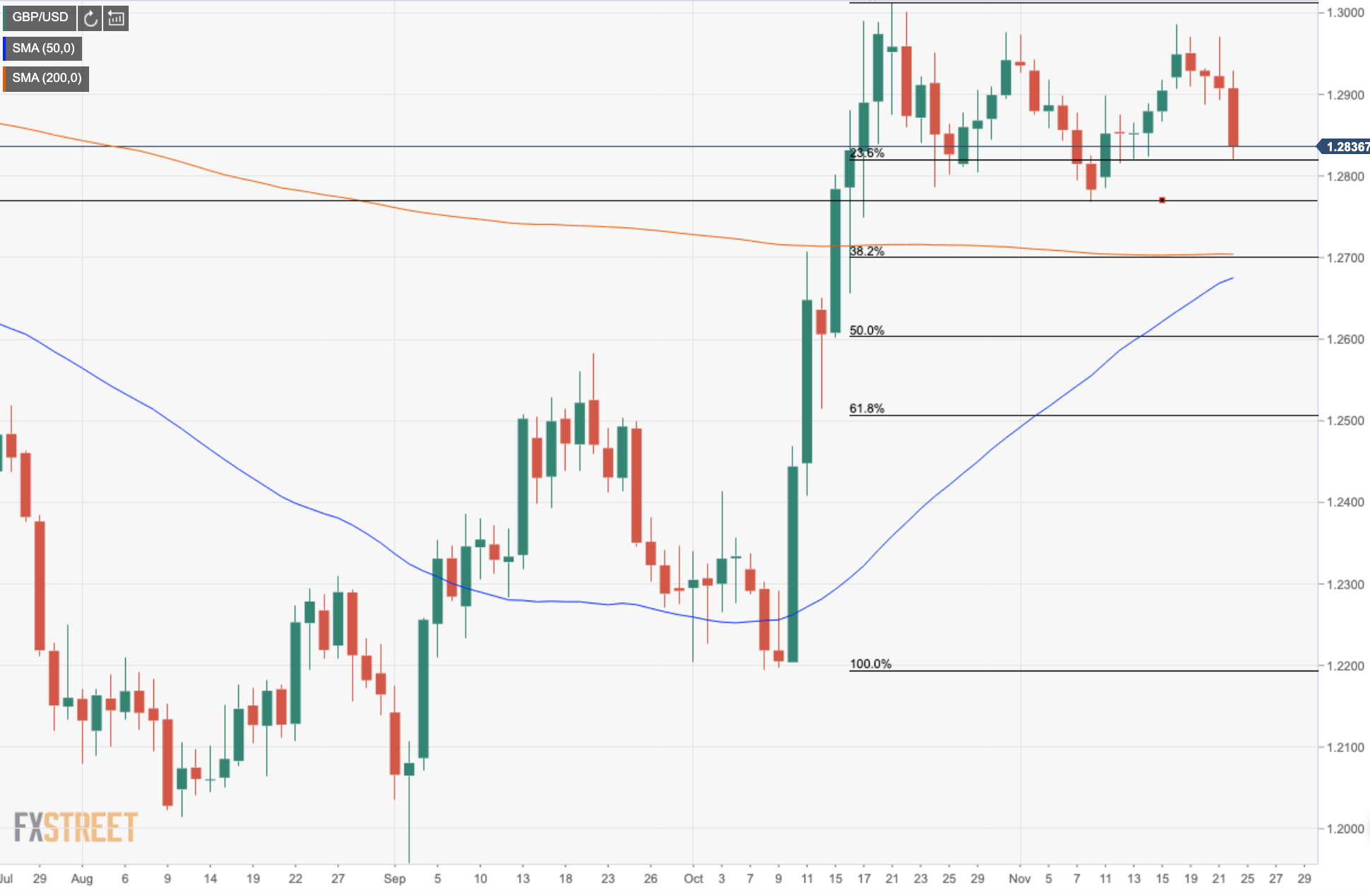 Bias is  towards a ‘phase-one deal’ sooner than later, Hong Kong elections in focus

Elsewhere, we are confronted with forever conflicting  trade headlines. The latest, on the whole, are somewhat more positive and both the US administration and Beijing seem determined to get a so-called phase one deal wrapped up this side of 2020. However, Hong Kong is a threat to such an accord to break 16-months of standoff tit-for-tat tariff  wars. The weekend’s  local elections, which is essentially  a de facto referendum for the protests,  are seen as a test for the pro-Beijing government after nearly half a year of demonstrations where millions have voted in a record turnout –  Polling stations closed at 10:30 pm (14:30 GMT) and results are expected today during  China’s morning on Monday.

Even if the pro-democracy camp is able to capture a lot of seats, it won’t have very substantial meaning in terms of every day politics but it will give more of moral support for the current protests. Considering the ties to the protests,  this could mean potential unrest which would be risk-sensitive considering the US administrations stance on Hong Kong, potentially sparking immediate action from Trump over the Hong Kong bill – Trump said on Friday to expect an announcement very soon. On the other hand, the days running up to polls have been some of the most peaceful in months – so perhaps a change is coming and if the result is heavily weighted in favour of the protesters, it could emerge as an alternative to their protesting which would be risk positive – so lets hope for the latter.

Additionally, weekend headlines could help risk sentiment along with respect to not only the various UK polls supporting a Brexit deal on a Tory victory, (The  Conservatives  have taken a commanding 19-point lead over Labour, according to the latest Opinium poll for the  Observer), but a Bloomberg article homes in on the word that  China will raise penalties on violations of intellectual property rights ‘in an attempt to address one of the sticking points in trade talks with the US’.

A glance at the charts, we can see that the Yen, the markets preferred  go-to currency at times of risk-off, is clinging to the 21-day moving average vs the greenback – a sign that investors are sitting on their hands and waiting for something concrete to come out with respect to geopolitics.

There is little in the weekend developments to particularly sway traders one way or the other at the open, so not expecting any major gaps, but there  does appear to be a bullish bias emerging from media reports. Technically, USD/JPY’s  test below the late August trendline support lacks conviction with the 50-day moving average offering support where it meets confluence with the 23.6% Fibonacci  retracement of the same rally to November swing highs – which  only gives additional bullish tendency for USD/JPY at this juncture. Bulls will need to penetrate back into the ascending trend which means a confrontation with the 200- day moving average at 109 the figure. 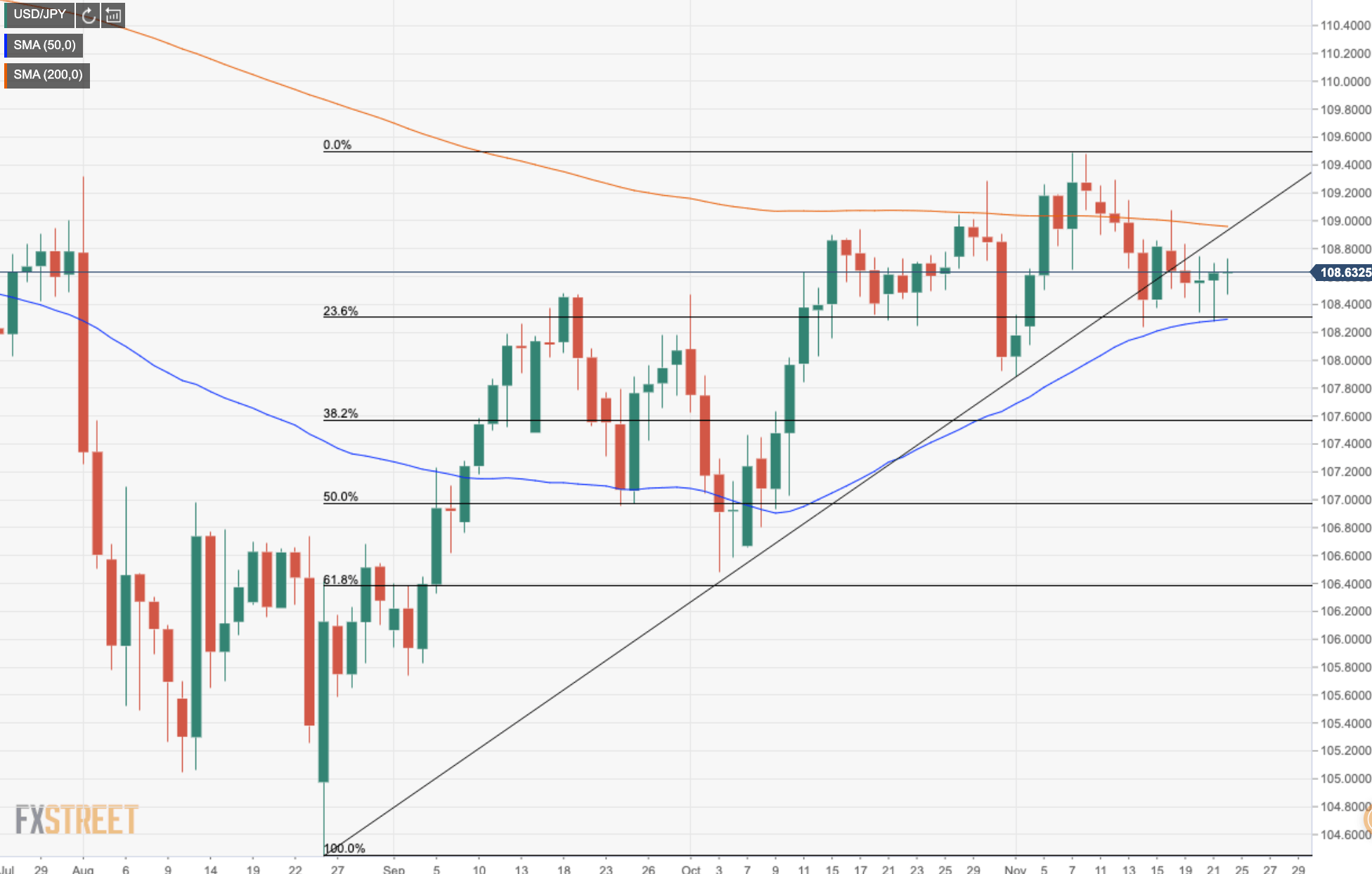 Chart of the week in Analysis: AUD/JPY at a critical juncture