Home » What you need to know for markets opening: Europe on lock-down, risk-off firmly back on the agenda

What you need to know for markets opening: Europe on lock-down, risk-off firmly back on the agenda

For a catch-up on Friday’s markets, see here: Forex Today: Relief measures far from enough to end the crisis

Looking forward for this week and today’s open, we should address what is likely to be the underbelly of events unfolding during this pandemic and crisis. Firstly, most key, the US dollar is back in vogue and for good disturbing reason.

Despite the prospects of the Federal Reserve cutting rates to zero and QE4, market pricing suggests USD funding could be a problem again which spells out a firmer dollar for the wrong kind of reasons. The world is facing the possibility of a financial crisis like no other borne out of a pandemic which is forcing nations into submission and to forgo their economies for the sake of humanity. We can look around to protections, charts and listen to what the experts are saying, but the fact of the matter is, there is no single number, chart or prediction that credibly captures or foresees COVID-19’s economic impact. This makes it impossible to navigate the volatility and is driving an exodus to cash.

So far, we have seen 27% wiped off from the S&P 500, triggering a meltdown and bear market, with the biggest one day drop since 1987 last week. Also, the Dow’s plunge into a bear market from a recent high was the fastest since the Great Depression. However, when looking at Friday’s charts, you would think that a cure or COVID-19 vaccine had been successfully developed with US stocks bouncing hard. 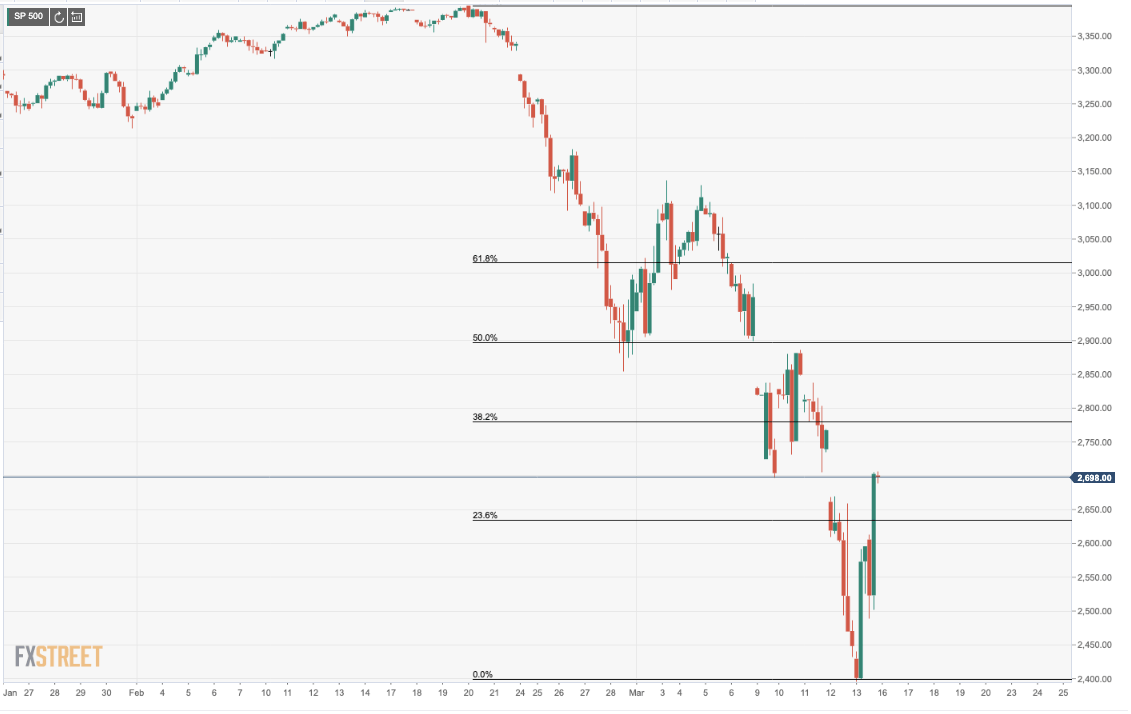 In fact, the gain in the Dow on Friday was the largest ever on a points basis. President Donald Trump took to social media and Tweeted in CAPS – “BIGGEST STOCK MARKET RISE IN HISTORY YESTERDAY!”

Markets rose on Friday on the prospects of the US opening access to $50 billion in funding for states and localities to combat the coronavirus pandemic. President Trump announced the package when addressing the nation and declaring a national emergency. Trump was saying that the US was expanding the ability of hospitals and doctors to provide treatments for the pandemic disease and ramping up testing.

However, it is completely counterintuitive to fathom stronger markets in the face of a national emergency on a global scale and Trump may well have to eat his words. A one-off move in the markets on Friday does not make up the moves we have seen of late with the Dow, for instance, registering drops in excess of 5% or over 1000 points in consecutive sessions. The ATR on these moves is through the roof and the highest on record – the worst of the drops in the Dow was almost 10%, registered on March 12th, or -2,352.60 points.

Canary in the mine

The longest-running bull market in history died a day after its eleventh birthday, killed by COVID-19, giving birth to a crisis in the money-markets which forced the Federal Reserve to intervene by injecting around $1.5 trillion into Wall Sreet’s key funding markets. This is the canary in the mine – it should be concerning that we are seeing a widening of the EUR cross-currency basis swap and the central banks needing to intervene, suggesting all is not well with the USD funding market. In 2008, European banks initiated the run on the FX swap market to fund their USD loan book – it is ironic that the COVID epicentre has been built on such fragile banking foundations.

European banks remain a lightning rod of negativity and since their peak almost a month ago, their indices have plunged 40 per cent. European bank shares now trade at the lowest level since the 1990s. What’s worse, is that there is no unity in what is supposed to be a unified project – EU leaders are divided as to how to protect the eurozone economy. While it is true, that unlike in 2008, the banks are not the source of this crisis and with the best-coordinated effort, they could actually be part of the solution working under government policies, better positioned to survive the shock this time, first, the eurozone governments need to agree on a solution and that is, so far, not happening and time is of the essence.

Meanwhile, the death toll and numbers of cases in Europe are skyrocketing and nations are on lockdown with borders and stores closed, (except pharmacies), restaurants and bars are also shuttered. Sporting events are cancelled, large gatherings are banned and schools are out. The pan-European Stoxx 600 index had its worst-ever day on Thursday, plunging 11.5%, after a blunt message from the European Central Bank president, Christine Lagarde, that it was the job of governments –not the ECB – to protect indebted countries.

While the week ahead holds major economic data events, such as the Federal Reserve, the focus will be elsewhere to start with and should be fixated on Europe’s finance ministers. The ministers will meet on Monday after the European Central Bank let the financial markets down by declining to cut interest rates as part of a stimulus package announced last week.

In response, on Friday, the EU loosened fiscal rules to allow countries to spend more fighting COVID-19 without breaching fiscal rules. However, it’s now up to them to use this wiggle room to provide support to their economies. Worryingly, however, Europe’s finance ministers do not have the best reputation following how poorly the debt crisis was managed so, there is little faith that they can protect their economies from the worst pandemic in more than 100 years.

One size doesn’t fit all

Looking to the individual countries, France is the next worst affected European nation to Italy. Casting minds back, the economy had already taken a hit from the riots and work strikes in 2019. Stark warnings to France economic growth have already surfaced from the central bank and government. Germany, which has, so far, avoided an Italy style epidemic, nonetheless, the export nation will feel the pain of a Chinese slowdown. Then, nations such as Spain that are reliant on tourism, (opposed to Germany reliant on export) could be the hardest hit as once a holiday has been cancelled, that is it – that business is lost, so chances of a V-shape recovery are likely limited to nations that will benefit from pent up demand – and this is where the problem has always been for the project – one size doesn’t fit all.

“In current circumstances, I wouldn’t be talking so much about fiscal stimulus, rather about crisis response”

The Eurogroup will be responsible for negotiating a crisis plan and “a very large policy response” to address the economic fallout – Mário Centeno said last week who aims for something greater than the €27bn Lagarde suggested was needed, that will ensure liquidity for companies, support unemployment benefits and help reduce hours for workers. However, looking to France, for example, it is asking for a stimulus plan that is far greater to meet its needs and a measure that EU leaders failed to agree to on a telephone conference summit last week.

The Fed, which meets again this week on 18th, has been eventful of late, stepping up as the first central bank to hold an emergency meeting and slash rats by a dramatic 50 basis point cut at an inter-meeting. In addition, the Fed stepped up its repo open market operations, effectively re-introducing QE. “Nor do we think they are finished,” analysts at TD Securities said in this respect:

We expect a 100 bp rate cut at meeting, if not sooner—all the way to 0.0-0.25%. We also expect additional liquidity measures and the start of preparations for full-fledged QE if the economy weakens sharply,” analysts at TD Securities said.

Chart of the week

For a catch-up on Friday's markets, see here: Forex Today: Relief measures far from enough to end the crisis Looking forward for this week and today's open, we should address what is likely to be the underbelly of events unfolding during this pandemic and crisis. Firstly, most key, the US dollar is back in vogue and for good disturbing reason. Dollar funding woes Despite the prospects of the Federal Reserve cutting rates to zero and QE4, market pricing suggests USD funding could be a problem again which spells out a firmer dollar for the wrong kind of reasons. The world is facing the possibility of…