Where EUR/GBP can go to in these five Brexit scenarios

Time is running out to reach a deal on Brexit, with fewer than 50 days left to go. UK PM Theresa May is trying to find a deal that may pass muster in the House of Commons, be acceptable to the European Union, and not break up her party.

This sounds like mission impossible, but stranger things have happened. And there is always the option not to take a decision: push the Brexit date back.

What are markets pricing in? The short answer is “a bad Brexit” but not a no-deal, cliff-edge fall.

Where will the cross go next?

The PM’s tactic is to run down the clock, forcing soft Brexiteers to vote for a deal they don’t like or risk no Brexit. And also forcing some Remainers to vote for a Brexit deal than wrecking the economy. Given the gap in the original January 15th vote, 230 MPs, the chances are slim.

May’s deal will provide relief to the pound by averting a hard Brexit but is also a favorable scenario for the euro-zone, that avoids damage. The pound may be the winner, with a solid margin.

This is the default option and with no solution, the chances are growing. A no-deal Brexit will likely inflict severe damage to the UK and also hit Ireland, France, Belgium, and the Netherlands quite a bit.

Both currencies are set to suffer against the safe-haven USD Dollar. Yet against each other, the euro is set to come on top, and probably by a broad margin especially amid images of grounded flights and the deployment of troops. While many issues could be resolved quickly, the panic could result in historic levels.

In this extreme but not so unlikely scenario, we could see  parity: EUR/GBP = GBP/EUR, at least for a short time.

Kicking the can down the road is a common EU practice. It happened so many times with Greece, and the EU is often treating the UK like Greece. And it is human nature to procrastinate instead of taking hard decisions.

For markets, it may provide some temporary relief, but significant movements are not on the cards. The pound could gain some ground, but not too much.

Norway is not an EU member but is bound to the bloc by extensive agreements. It pays into the EU budget, allows free movement, and participates in the European single market. Adopting the model will be economically beneficial for the UK even though it loses its influence.

The model is something the EU cannot refuse to, as it already exists. The UK just needs to take it off the shelf. And this model probably has broad support in parliament, as it does not cause damage.

However, it is branded as BRINO: Brexit In Name Only by those who want a fully independent UK. Going for the model risks tearing the Conservative Party apart. Therefore, the chances are not high.

Low probability and a high reward mean a significant movement in favor of the pound.

The People’s Vote group celebrated when May’s Brexit deal failed, and they thought the chances of a second EU Referendum increased. At the moment, Labour is not really backing it, as Euroskeptic Jeremy Corbyn sticks to his doubts about the bloc and ignores members who voted for him.

Assuming the options are the deal and no Brexit, markets would likely rejoice on the chances that voters will bury Brexit. Opinion polls show solid support to Remain. These polls can quickly change once the campaigns begin, but markets respond to what they know at the moment.

In this scenario, which has medium chances,  euro/pound could plunge all the way to 0.70 = pound/dollar at 1.42.

The current calm in pound/euro set the stage for a storm as  Brexit  is the No. 1 issue affecting the cross. Under these main five scenarios, EUR/GBP has a 40% range, and this is not exaggerated. 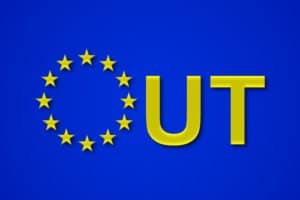 EUR/USD: 1.15 Should Act As An ‘Attractor’; Next Trigger For Rebound A US-China Trade Deal – Danske

With fewer than 50 days until Brexit Day, all the options are on the table. Brits living in the continent and Europeans in the UK are thinking what to do with their funds. There are five plausible scenarios with different outcomes for the euro/pound. Time is running out to reach a deal on Brexit, with fewer than 50 days left to go. UK PM Theresa May is trying to find a deal that may pass muster in the House of Commons, be acceptable to the European Union, and not break up her party. This sounds like mission impossible, but stranger…