WTI extends the leg lower below $64.00 ahead of US data

Prices of the barrel of West Texas Intermediate are sharply lower today, dropping to fresh multi-day lows in sub-$64.00 levels.

Prices of the barrel of the American benchmark for the sweet light crude oil are down for the third session in a row at the end of the week, breaking below the $64.00 mark and finding some contention at the 61.8% Fibo retracement of the October-December 2018 drop near $63.70.

In the meantime, crude oil prices have fully faded the advance to 2019 highs beyond the $66.00 mark per barrel seen in the first half of the week spurred by news that the White House will end the waiver programme for several countries buying crude oil from Iran under the current US sanctions.

Also adding to the weekly correction lower in prices, both weekly reports on US crude oil stockpiles by the API (Tuesday) and the EIA (Wednesday) noted supplies went up by 6.9M barrels and 5,479M barrels, respectively, reversing the previous drops.

Later in the session, the preliminary figures for US Q1 GDP will grab all the attention ahead of the U-Mich index and the weekly report on US oil rig count by driller Baker Hughes.

WTI climbed to fresh 6-month highs near the $66.00 mark per barrel earlier in the week following news around US waivers. In addition, hopes of a closer US-China trade deal remain supportive of a better tone in crude oil prices, as US and Chinese negotiators will meet again next week in Beijing. On the broader picture, the bullish view on crude oil stays underpinned by the so-called ‘Saudi put’ in combination with tighter conditions in the US markets (amidst US net imports in historic low levels and the rising activity in refiners ahead of the summer session), the current OPEC+ deal to curb production, US sanctions against Iranian and Venezuelan crude oil exports and positive speculative positioning. 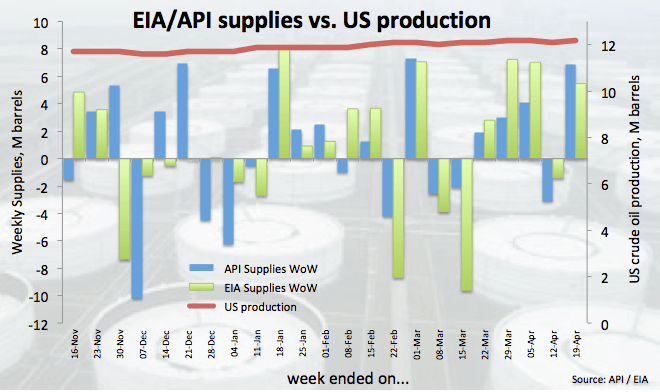 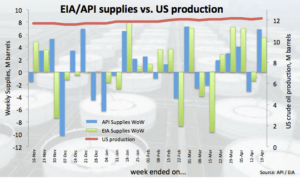 USD/CHF sits near multi-year tops, comfortably above 1.0200 mark ahead of US GDP