Latest
You are at:Home»FXStreet News»WTI looks weaker near the $59.00 mark ahead of EIA

Prices of the barrel of WTI charts an inconclusive session around the $59.00 mark per barrel so far on Wednesday.

The West Texas Intermediate keeps navigating the lower bound of the weekly range around the $59.00 yardstick, while bulls failed to push prices past the key $60.00 mark per barrel during early trade.

Crude oil prices started the session on a positive footing following positive news regarding the vaccine rollout in Europe along with news that the IMF revised up its forecast for global growth and Tuesday’s drop in US crude oil supplies, as reported by the API. 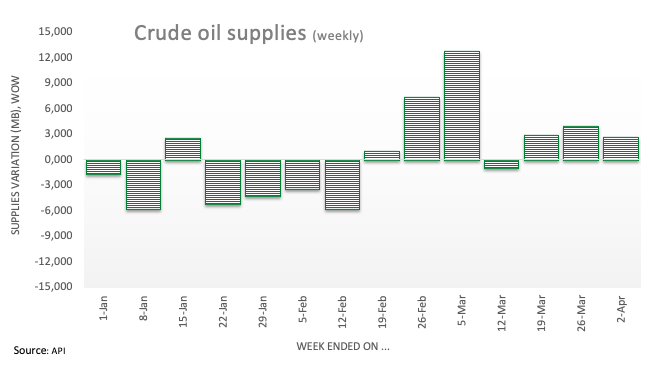 However, the recent decision by the OPEC+ to start easing its oil production cuts from May appears to still be weighing on traders’ morale. In the same line, Iran and other Western powers started talks in Vienna on Tuesday, all aimed at reviving the 2015 nuclear accord, which could potentially see Teheran sanctions lifted and the subsequent increase in the country’s oil production/exports.

Later in the session, the EIA will publish its weekly report on US crude oil inventories ahead of Friday’s oil rig count by driller Baker Hughes.

Prices of the American benchmark for the sweet light crude oil extends the choppy activity seen in past sessions and look to be consolidating below the $60.00 mark so far. In fact, the November-March rally in the commodity came to a halt just below the $68.00 mark per barrel (March 8) amidst renewed worries on the impact on the economic recovery of fresh lockdown measures in Europe along with the slow pace of the vaccine campaign. Adding to the downward trend, the stronger note of the dollar has been also weighing on prices along with diminished inflows into commodity-based ETFs. On another front, refineries are expected to go into maintenance-mode for the next 1-2 months, putting prices under extra pressure.

Key events in the crude oil space: Weekly report on US crude oil supplies by the EIA (Wednesday) – US oil rig count (Friday).

Eminent issues on the back boiler: Higher crude oil prices could spark fresh interest in US shale and potential increase in production. Demand-supply balance could prompt a moderate correction lower later in the year. Potential overheating of the oil market if current tight conditions extend into H2 2021. Bouts of geopolitical effervescence, mainly in Africa and the Middle East.