The XRP price has seen a positive effect as the Ripple v. SEC lawsuit takes a new turn.

The lawsuit against Ripple has been elaborate as its native token XRP undergoes scrutiny under allegations of being an unregistered security.

During the recent hearing on March 20, Magistrate Judge Sarah Netburn asked if exchanges sold XRP illegally. Jorge Tenreiro, a senior trial attorney for SEC, responded to it, stating that exchanges were exempt under the “Section 4″ provisions.

“¦ broadly speaking, the section 4 exemptions, if these are transactions by the people in the market, they are exempted by statute”¦ The statute Section 5, though, focuses on and is relevant to this case, the issuer and the affiliates of the issues. So it is only Mr. Larsen and Mr. Garlinghouse, the CEOs, or someone on the board. Section 4 specifically exempts these transactions that the court put in hypothetical of all these other people buying and selling XRP in the market.

This development caused the “RelistXRP” keyword to trend on Twitter in the US, Australia, the Netherlands and other nations where the token has significant traction.

Like Dogecoin, the XRP price seems to be mostly retail-driven and turns volatile as social chatter peaks.

While this news seems to favor XRP and might even allow exchanges to list XRP, it is not. In fact, no major exchange has rescinded its decision on putting XRP trading on hold or delisting it.

Perhaps, the reason is simple. CEOs of exchanges are risk-averse when it comes to legal matters. While the SEC did not provide any clarifications before listing XRP, exchanges and its CEOs will play it safe and might not list XRP anytime soon.

XRP price has been tapping the supply barrier at $0.0.62 for more than three months but has failed to breach it. During this period, Ripple has formed an inverse head and shoulders pattern.

This setup contains two valleys on the extremes of roughly the same height known as “shoulders,” with the middle one being the deepest, called the “head.” As the name suggests, the pattern is an inversion of the head and shoulders pattern.

The setup forecasts a 72% upswing, determined by measuring the distance between the head’s deepest part to the “neckline” at $0.62. This target places the XRP price at $1.08.

The Ripple v. SEC case will play a pivotal role in determining the breakout for the aforementioned technical formation. The recent news has pushed the XRP price by more than 25%. Another positive development could be enough to send the remittances token through the neckline at $0.62. 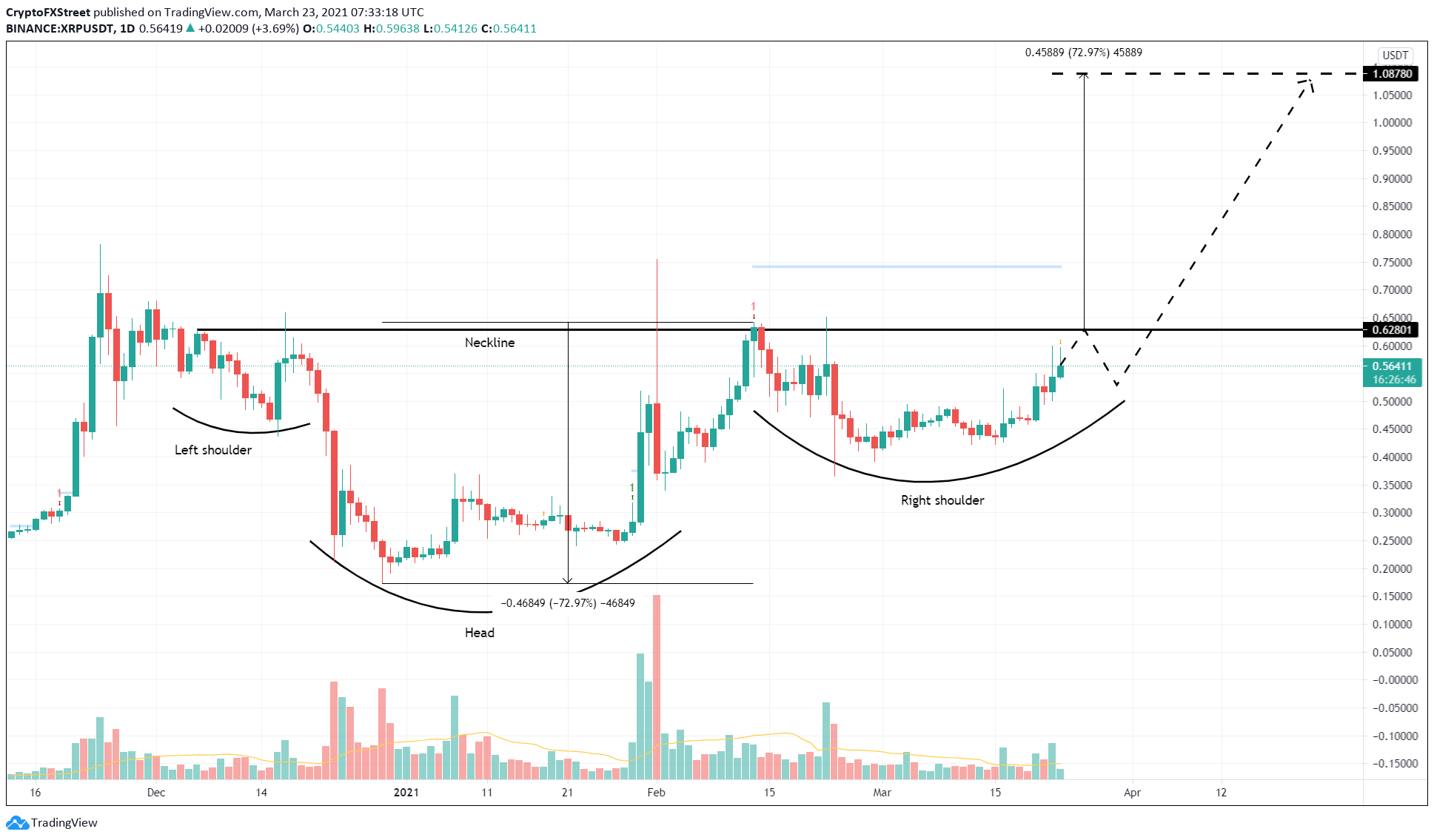 Like Dogecoin, a large crowd could propel the XRP price into the $1 range. Supporting this bullish view is the Telegram pump event on February 1 and Dogecoin’s massive surge in early January and February.   Both these rallies were FOMO-fueled.

Likewise, the XRP price surge since March 20 also shows a positive spike in social chatter across the board.

Interestingly, the Professional Traders chat spiked more than usual after the “RelistXRP” trend. Hence, if Ripple’s social volume continues to climb, then XRP price will follow.

While the upside target is $1.08, investors need to be aware of the “preemptive top” signal flashed by the Momentum Reversal Indicator (MRI) on the daily chart. This signal warns market participants that the recent 28% uptrend might be coming to an end.

If the XRP price falls below $0.40, it will create a lower low that serves as an invalidation to the inverse head-and-shoulder pattern. In this scenario, Ripple could drop 20% to $0.37.

The SEC confirmed that exchanges not affiliated with Ripple could not have illegally sold XRP. On hearing this development, the XRP army quickly retaliated as "relistXRP" started trending on Twitter in various regions. XRP price seems to be coiling up for a massive move up if it breaches the supply barrier at $0.62. The XRP price has seen a positive effect as the Ripple v. SEC lawsuit takes a new turn. 'RelistXRP' starts trending as XRP army awakens The lawsuit against Ripple has been elaborate as its native token XRP undergoes scrutiny under allegations of being an unregistered security. During…