A group of users who suffered losses due to the sudden halt of XRP on various exchanges filed a lawsuit against the Nexo platform. This move comes after the Ripple price surged nearly   65% in the last 24 hours.

The Securities & Exchange Commission’s (SEC) securities fraud case against Ripple has caused many platforms to cease XRP-centric services. However, Nexo seems to be one of the first companies to face a class-action lawsuit for halting XRP-related transactions.

Nexo is a cryptocurrency lending company whose users are mounting a backlash for wrongfully suspending XRP as a payment option. This move allegedly liquidated its customers, who are now seeking $5 million as retribution.

The legal documents filed by Junhan Jeong, a California resident, is responsible for initiating the case against Nexo.

Nexo’s intentional and unjustified suspension on December 23, 2020, of a critical repayment option on its platform has resulted in liquidation of the collateral of hundreds of Nexo customers, causing well over $5 million in damages.

However, Nexo responded to the lawsuit in a blog published on April 5, stating that it was among more than 30 leading platforms to halt XRP-related services.

Regarding the “intentional and unjustified suspension” allegation, Nexo responded:

The reason XRP repayments – as a particular transaction type – were temporarily suspended is that repayment, by its nature, constitutes a type of exchange service offered by Nexo.

The blog further mentioned that the customers could have used other Nexo-approved cryptocurrency assets in lieu of XRP to repay their loans.

The XRP price broke out of an inverse head-and-shoulders pattern after more than three months. This technical formation consists of two distinctive swing lows of almost the same height and forms the shoulders. The central valley is much deeper than the others and creates the head.

The peaks between these steep price actions face rejection at $0.63, a horizontal resistance level known as the neckline. As of Monday, a spike in buying pressure pushed the XRP price to blast through this level, signifying a breakout toward the target at $1.08.

This move is determined by adding the distance between the head’s lowest point and the right shoulder’s peak to the neckline at $0.63. At the time of writing, the XRP price needs a 10% upswing to tap the said target at $1.08. 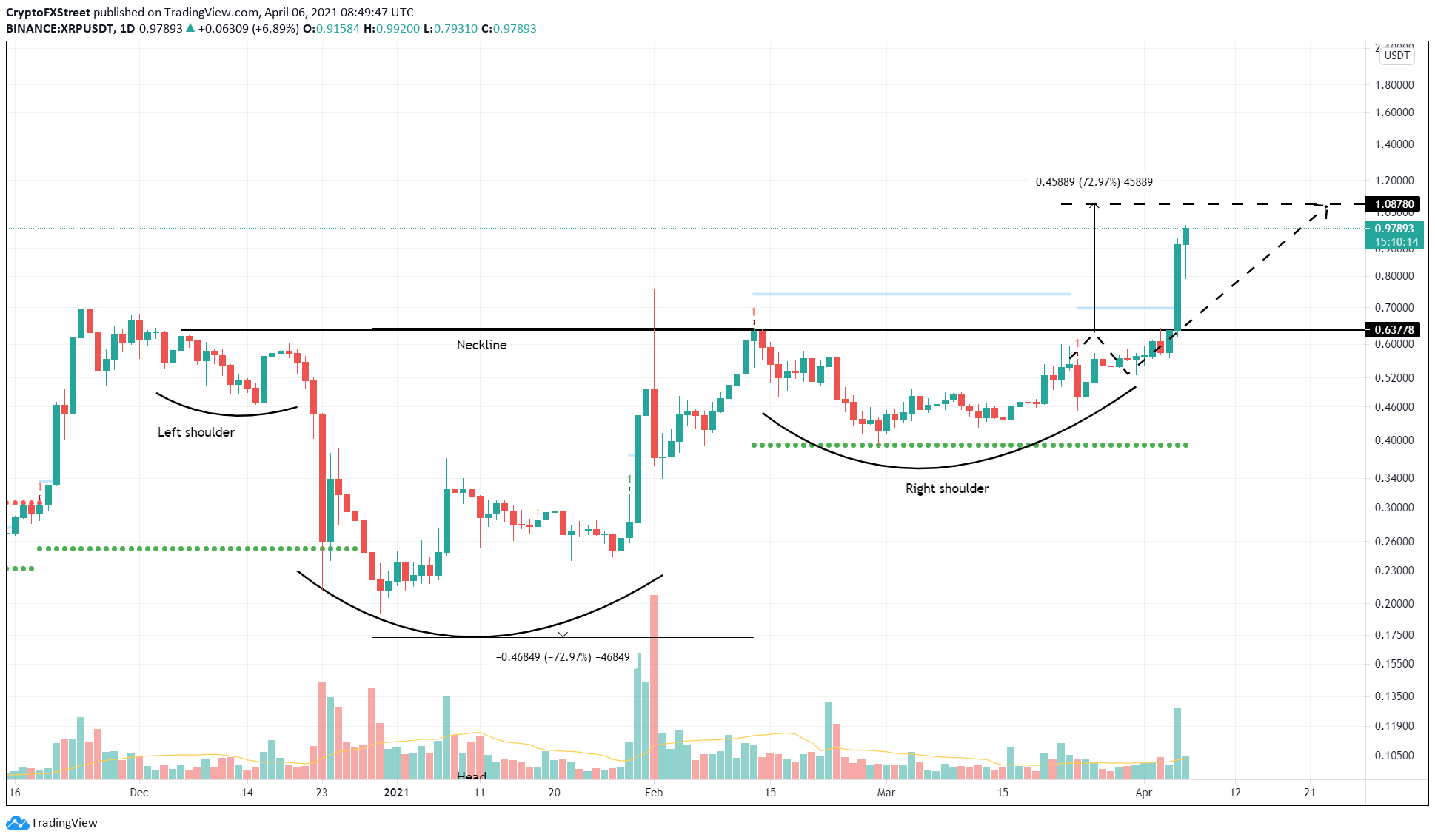 If the bullish momentum wanes, the remittance token could see a 25% drop to the Momentum Reversal Indicator’s breakout line at $0.74.

A breakdown of this level could see this pullback extend to $0.70.

EUR/JPY to resume the uptrend above the 130.00 level – Credit Suisse

Nexo, a lending platform, is named a defendant in a class-action case filed by XRP users. The plaintiffs seek redress for the harm resulting from Nexo's intentional and unjustified suspension of XRP on December 23, 2020 XRP price broke out of an inverse head-and-shoulders pattern, moving ever so closer to the $1 target. A group of users who suffered losses due to the sudden halt of XRP on various exchanges filed a lawsuit against the Nexo platform. This move comes after the Ripple price surged nearly   65% in the last 24 hours. Class-action lawsuit against Nexo   The Securities…