Latest
You are at:Home»Opinions»3 reasons for euro/pound to rise, and where to

Euro/pound, aka the “Brexit cross” has been remarkably stable as Brexit nears. But such limited movement does not last for to long and big breakouts usually follow.

There are three reasons to suspect this break will be to the upside.

The clock is ticking towards Brexit Day, March 29th, 2019. The UK insists on renegotiating the Irish Backstop, and the EU rejects it. Both parties are going in circles and markets are sure there will at least be a delay, to allow for more time.

However, there is one thing the government has rejected: eliminating the option of a hard Brexit, aka a no-deal Brexit. While a small minority of Conservative MPs support this option, they are the most vocal ones. PM Theresa May sees the Tory Party as her home and will not let it fall apart. If the hard-Brexiteers are more aggressive than the Remainers, she’ll go with the Brexiteers as she assumes the Remainers will fold.

And while her confidant Olly Robins talked about a long extension in a Brussels hotel bar, he will necessarily have her ear when push comes to shove.

Also, playing down the clock is a dangerous game with no easy escape. A hard Brexit can happen by accident. Markets will not need to wait for that to happen but may panic beforehand. The current price of GBP/USD, close to 1.2900, prices in a softer Brexit or at least a delay.

This may be too optimistic, and Sterling may have room to fall.

That’s the GBP side of EUR/GBP.

The euro-zone has been publishing weak data of late. Germany barely skipped a recession while Italy is already there. The Yellow Vest protests in France are set to weigh on its economy, and Spain faces political uncertainty once again.

However, policymakers have already responded. Senior officials at the European Central Bank have already hinted about a softer stance. The shift will likely include not only pushing back the guidance regarding the rate hike, but also perhaps another TLTRO, more money to banks.

The recent fall of the euro, with EUR/USD setting new 2019 lows.

All in all, things are not great in the euro-zone, but this is already priced in.

3) General risk-off favors the euro over the pound

It is not only Brexit or the German slowdown but a global one, with China leading the way. Markets suffered in December, and the Fed then came to the rescue with the dovish shift. However, the slowdown did not stop, and the mood may turn sour again.

And when the mood turns sour, the euro has an advantage over the pound. The common currency flirted with a safe-haven status in mid-2015, when it rose on lousy news related to the Greek crisis and fell when a solution seemed near.

A safe-haven currency is one that is used for funding. The yen is the ultimate haven with the never-ending fiscal stimulus, high debt, and zero interest rates. The USD is another one due to its haven status.

The euro is next in line. Similar to Japan, interest rates are rock bottom, and the ECB enacted a gigantic QE program. These steps have weakened the euro in the good times, but in bad times, some of the safe haven flows may flow back to the old continent, even if some of the troubles stem from the old continent.

So, if the yen and dollar rise against the rest of the world, the euro weathers this storm better than the rest.

All in all, EUR/GBP has room to rise. 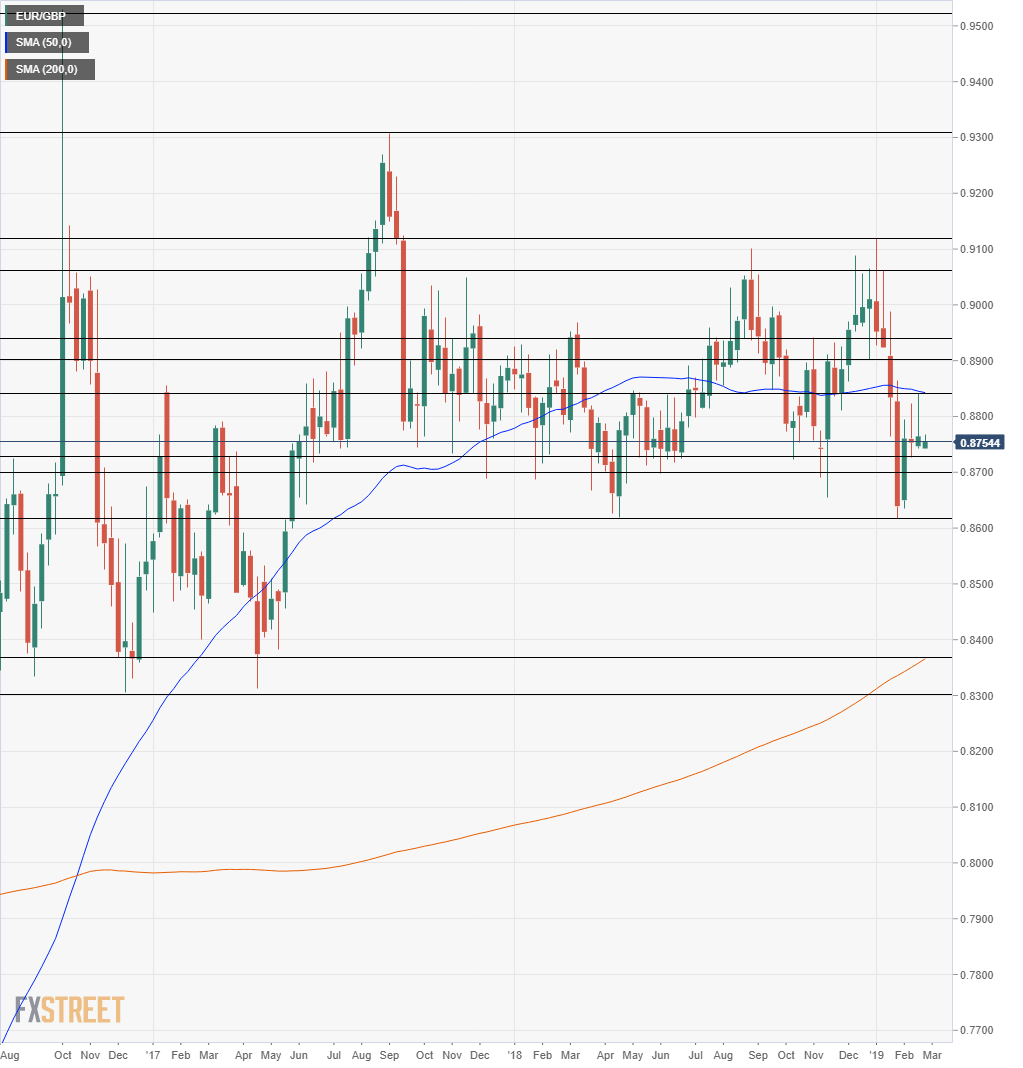 We are using the euro/pound weekly chart to see the big picture.

The initial barrier is 0.8845 which was a peak in recent days and worked in both directions in 2018. It also coincides with the 50-week Simple Moving Average. 0.89 provided support early in the year and is closely followed by 0.8940, the autumn high.

Further above, 0.9310 was the peak in 2017, during September to be precise. The next significant level to watch is 0.9520 which was the post-Brexit peak. The cross had already reached higher levels, at around 0.98, just after the global financial crisis.

Get the 5 most predictable currency pairs
Previous ArticleEthereum (ETH) eyes $150 ahead of Constantinople upgrade
Next Article EUR/GBP daily chart: Euro sidelined near 0.8750 against Sterling