Latest
You are at:Home»Forex News»After the downfall, EUR/USD may be extra stretched

The EUR/USD is trading around $1.2070, suffering the third day of sharp falls. The US Dollar continues gaining traction across the board.

Three reasons for the USD rally

This time, it is not only about the bond yields. The 10-year benchmark fell from the highs of 3.033% to below 3%. Nevertheless, the elevated level continues supporting the greenback.

Another source of strength for the American currency comes from hopes for resolution on trade relations with China. Top White House Economic Adviser Larry Kudlow has expressed optimism on reaching an agreement with the world’s No. 2 economy on the eve of his trip across the Pacific. The mood around tariffs has had its ups and downs in recent weeks and this upturn also feeds into the US Dollar’s rally.

A third source for the greenback’s gains comes from higher expectations from the first estimate of US GDP coming out at 12:30 GMT. The Durable Goods Orders report for March that was published on Thursday beat expectations on the headline and the figure adds to the GDP. However, the flat read on Core Orders paints a mixed picture.

In the euro-zone, things do not look that great. The EUR/USD initially rallied when ECB President called the recent slowdown a “moderation” and listed temporary factors. He also said that the decline has stabilized and that the indicators are above historical averages. However, the cautious approach and the uncertainty about the QE program provided ammunition for the EUR/USD bears once the dust settled and the US Dollar gained fresh strength.

All in all, economic data looks much better in the US, justifying the fall in the EUR/USD. 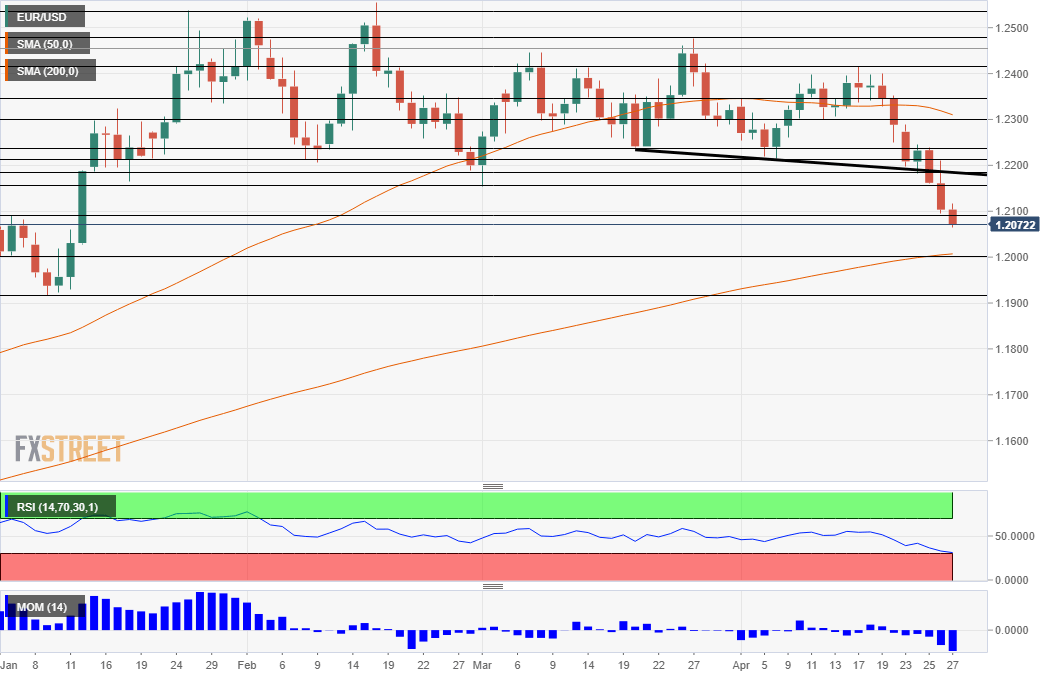 The RSI on the daily chart is touching the 30 level, which is the entry point into oversold territory. Momentum is heavily tilted to the downside. Bears have had their share and may be exhausted at this point.

Support awaits at the $1.2000 level which is not only a round number but also where the 200-day Simple Moving Average meets the chart, making it a key level. Further below, $1.1920 was a trough early in the year and is the next level to watch.

Get the 5 most predictable currency pairs
Previous ArticleAfter the bad GDP, support for the pound is only at 1.3745
Next Article US GDP beats with 2.3% – USD initially rises and then crashes