Latest
You are at:Home»Opinions»After the reshuffle, GBP/USD now faces the hard data

Keep calm and carry on – the famous saying is relevant to pound/dollar’s trading. The currency pair hit the lowest since November only to recover amid calm from all sides about the coronavirus outbreak and a favorable change in the UK government. The focus now shifts to fresh economic figures.

This week in GBP/USD: The Javid jump stood out

“Bloodbath,” “Thrown under the bus,” Knifing” – read some of the headlines following the cabinet reshuffle. Prime Minister Boris Johnson forced Sajid Javid out of his position as Chancellor of the Exchequer, replacing him with the less known Rishi Sunak. The change at 11 Downing Street – which shocked observers – aligns the Treasury with the PM and opens the door to infrastructure spending.

Dominic Cummings, the PM’s powerful aide, saw Javid and his advisers as roadblocks to implementing investment plans. The deficit limits that had been in place toward the March 11 budget are now out. In regular times, fiscal imprudence would have been punished by markets – but these are abnormal times. Investors see the budgetary spending is boosting the economy – and pound traders speculate that the Bank of England is now relieved of further stimulating the economy with rate cuts.

GBP/USD jumped in response to the political developments that turned into the defining moment of the week for sterling.

The coronavirus outbreak has been topping the list as the death toll in China continued rising, and the disease spread around the world, including to Brighton. However, the economic impact seems contained as most Chinese factories returned to work, and the pace of new infections has decelerated.

Stock markets advanced, and the better market mood helped sterling advance. Mark Carney, the outgoing Governor of the Bank of England, compared the current scare to previous ones and noted that bounces followed disease-related economic downturns.

On the other side of the pond, Jerome Powell, Chairman of the Federal Reserve, said that he is closely monitoring developments, but there is no reason to doubt the expansion will last. The words of both central bankers, and those from Chinese policymakers, helped soothe markets.

While a vaccine to the coronavirus may take many months, the pound seems to be immune to Brexit headlines. Both the UK and the EU continued digging into their positions. Sajid Javid, the UK Chancellor of the Exchequer, said that Britain aims to maintain equivalence with the EU – essential for the financial services sector – while making its own rules.

The response from Michel Barnier, the EU’s Chief Negotiator, was swift and blunt – “Don’t kid yourself.” Investors fear that the UK may revert to World Trade Organization rules once the post-Brexit transition period expires at year-end.

The UK’s exit and the uncertain elections took their toll on the UK during the fourth quarter as growth screeched to a halt. However, there was a silver lining for sterling bulls, as yearly growth exceeded expectations with 1.1%. Overall, investors are focusing on more recent data from after the elections than from the bitter end to 2019.

US data has been mixed. The Core Consumer Price Index hit 2.3% in January and the University of Michigan’s Consumer Sentiment stands at 100.9 in February, both above expectations. On the other hand, the Control Group on Retail Sales remained flat – below expectations – and on top fo downward revisions. Industrial output also fell short of estimates.

A follow up to the cabinet reshuffle may move markets. The government may brief – or leak – the extent of its potential fiscal stimulus. Sterling may respond positively to a more massive splash, while it may slide if Sunak’s plans remain close to Javid’s ones.

Brexit-related headlines are likely to continue moving the pound, and they may become harsher. Both sides are unlikely to compromise until official talks begin. Markets’ recent shrugging off of such briefs and leaks may end.

The economic calendar will undoubtedly keep sterling traders busy as well. Business sentiment has leaped in January after the mid-December elections, and now several pieces of hard data shed some light on economic performance last month.

Did the economy receive a “Boris bounce”?

The jobs report is mostly focused on figures for December, but the Claimant Count Change for January serves as a snapshot for recent labor market developments. An increase in claims is on the cards. Economists expect the Unemployment Rate to remain around historic lows of 3.8% in December, and wage growth will likely dominate the reaction – even though it is for December.

After relatively robust figures in November, Average Earnings are set to decline by 0.1% – both when including and when excluding bonuses. The BOE is closely following development in salaries to assess potential inflation.

The CPI data is due out on Wednesday and carries mixed expectations. Headline inflation is forecast to remain at 1.3% in January, and Core CPI is predicted to edge up to 1.5%.

Thursday’s retail sales figures for January may prove to be the most significant gauge of post-election sentiment. Shopping volume squeezed in both November and December. The slide of 0.6% in the last month of 2019 is forecast to make way for an increase of the same percentage in the first month of 2020. A third consecutive fall would be worrying.

And after three “hard data” reports, the week concludes with fresh, forward-looking figures from Markit. The preliminary Purchasing Managers’ Indexes for February will likely continue showing cautious optimism – statistics marginally above 50, reflecting modest growth. PMIs have been below that threshold – pointing to contraction – during long months last year. 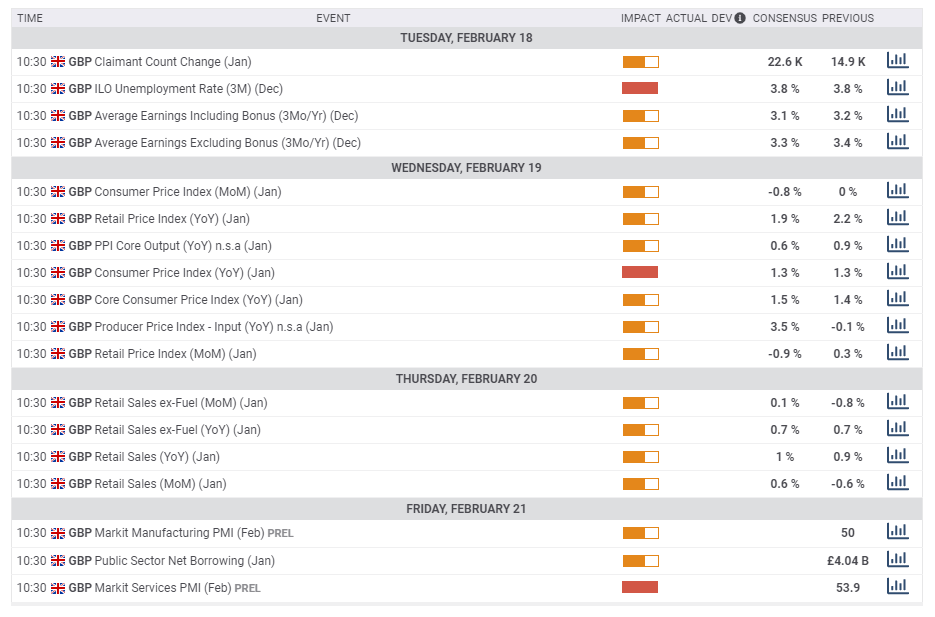 US events: Fed remains in focus

The coronavirus outbreak continues central to market movement. The pace of infections and the number of cases outside China will likely be watched closely. Any halt of economic activity in the world’s second-largest economy or any spread in major economies may dampen markets. On the other hand, without alarming news, investors may focus on different topics.

The dollar’s reaction has been inconsistent. While the greenback attracts safe-haven flows, investors flock into US treasuries, pushing yields lower and making the dollar less attractive. How will the currency react moving forward? That remains an open question.

The economic calendar features several noteworthy publications. The Federal Reserve’s meeting minutes from the January meeting may provide insights on the bank’s openness to cutting rates – despite its current “wait-and-see” stance. Traders will examine the level of willingness among doves and others to reduce borrowing costs if the economic outlook deteriorates. The statement on January 31 included subtle downgrades and the document – revised until the last moment to convey a message to investors – may put more emphasis on the coronavirus outbreak.

Housing figures for January will likely show an ongoing expansion in the sector, which is enjoying robust growth. The Philly Fed Manufacturing Index for February may provide insights into the industrial area after the signing of the Sino-American trade deal.

Markit’s PMIs are also of interest, and economists expect them to show moderate growth in both the manufacturing and services sectors.

Pound/dollar has made significant strides in February, but the 300-pip run is now facing a double-top at 1.3070 – which was hit twice in February. Moreover, it converges with the 50-day Simple Moving Average. The bias remains in favor of the bulls as momentum turned positive, and the pair trades above the 100 and 200-day SMAs. 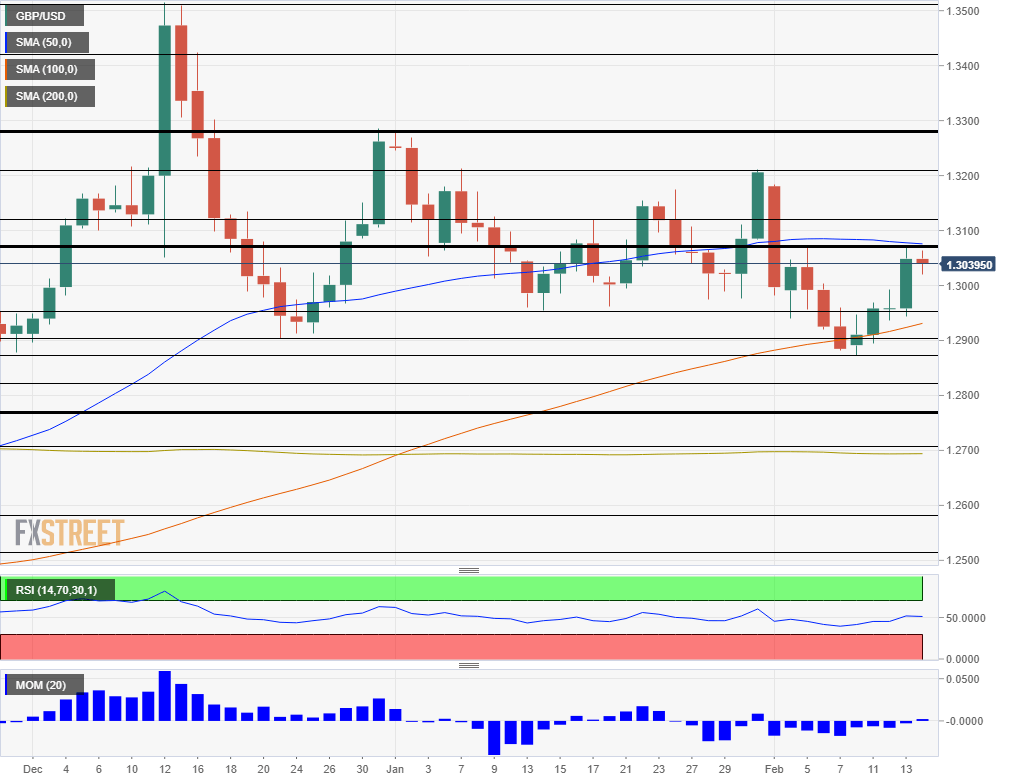 The upcoming week may be a return to reality – the economy is going nowhere fast. After the optimism about fiscal stimulus, sterling may correct lower, also amid Brexit fears and the coronavirus scare – which has yet to peak.

The FX Poll is showing a bullish bias on all timeframes. However, it is essential to note that experts have been upbeat on cable before the recent rise and that average targets have been mostly unchanged in the past week. 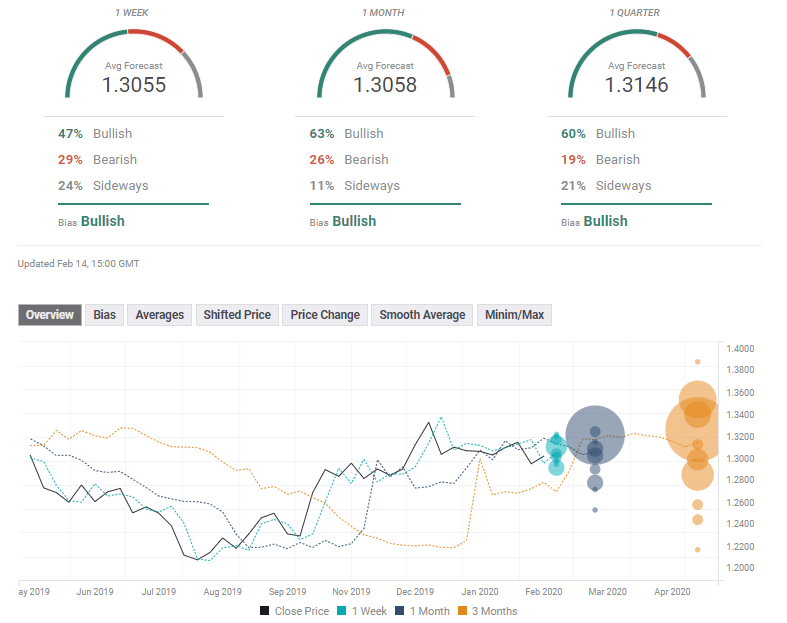 Get the 5 most predictable currency pairs
Previous ArticleUSDNOK and EURGBP Update – Elliott wave analysis
Next Article USD/CAD rebounds from session lows, trades above 1.3250