Latest
You are at:Home»Opinions»AUD/USD: Coronavirus not over, Australian labor data awaited

The Australian dollar has benefited from receding fears about the coronavirus and optimism coming from New Zealand. The respiratory disease is likely to continue moving markets, but to make more way for the data, such as Australia’s jobs report.

The coronavirus’s death toll continues rising, and concerns remain elevated – but markets are significantly calmer. The deceleration in the number of new reported cases in China and the return of most of its factories to work has helped boost risk sentiment – pushing the Australian dollar higher. Moreover, Beijing has taken steps to aid companies hit by the impact of the virus by offering cheap loans, among other measures.

While the Australian economy is bracing for a hit from the respiratory disease in its top trading partner, investors perceive the damage to being contained. After dipping to decade lows, the Aussie has recovered.

A closer neighbor also had a positive effect on the A$. The Reserve Bank of New Zealand published forecasts that consisted of no rate cuts through 2020 – causing a surge in the kiwi and carrying the Aussie higher as well.

Across the Pacific, Jerome Powell, Chairman of the Federal Reserve, also seemed upbeat and contributed to the upbeat mood. While he said that the Fed is monitoring any spillovers from the virus, he saw no reason to see the expansion coming to an end.

US inflation data surprised to the upside with the Core Consumer Price Index holding onto 2.3% yearly, better than expected. However, retail sales missed with the Control Group remaining flat in the first month of 2020.

Circling back to Australia, economic figures were mixed. Home Loans rose by 3.5% in December, and Estpac’s Consumer Confidence gauge advanced by 2.3% – both better than expected. On the other hand, the National Australia Bank’s business surveys fell short of expectations and reflect caution. More significant figures are awaiting Aussie traders down the line.

Coronavirus headlines are to continue having a considerable effect on the A$. The ongoing deceleration in those infected and reports of plants returning to capacity are expected to boost sentiment. However, new cases outside China and potential disruptions to the economy due to infections in factories may weigh on sentiment.

The Reserve Bank of Australia’s Meeting Minutes kick off the week and may shed more light on the future policy decisions. The RBA left its rate unchanged, and Governor Phillip Lowe later provided a mixed message above the bank’s intentions. While he said that the bank considered cutting prices, he expressed satisfaction from the current state of the economy, especially the labor market, which now comes to a test.

While Australia enjoyed an impressive increase of 28,900 jobs in December, they were all part-time positions. Nevertheless, the Unemployment Rate fell to 5.1%, closer to the RBA’s aim of 5%, and with a high participation rate of 66%.

The upcoming publication for January may show a slower hiring pace, and any change in the jobless rate is set to rock the Aussie.

Australia’s Wage Price Index for the fourth quarter of 2019 – published before the labor report – is also of interest and may impact the A$.

The People’s Bank of China meets early on Thursday to make its rate decision, and it may refrain from adding further stimulus after the recent steps. The move depends on stock markets and developments in battling the coronavirus.

Here the most prominent Australian and Chinese releases on the economic calendar:

US events: Fed minutes stand out

After another busy week, the upcoming one is lighter. Building Permits and Housing Starts figures for January kick off the week, and they are both expected to remain at elevated levels. Producer prices – like consumer ones – will likely remain stable.

The Federal Reserve’s meeting minutes from the late January meeting, due in the middle of the week, stand out. The world’s most powerful central bank left rates unchanged as expected and signaled an ongoing pause. However, it made subtle changes that may open the door to reducing borrowing costs.

In his recent testimony, Powell showed a willingness to act “aggressively” in case of a potential downturn. The minutes may reveal the level of support for further monetary stimulus, either by QE or by cutting rates. It is essential to note that the minutes do not provide raw documentation of what went down in the meeting, but that the document is revised to convey a message to markets.

Markit’s preliminary Purchasing Managers’ Indexes for February, published late in the week, have the potential to improve. These forward-looking gauges are above 50 – reflecting growth – for both the manufacturing and services sectors. The US economy continues enjoying robust growth.

While US politics is interesting, markets are turning out of the Democratic Primaries and also from President Donald Trump’s tweets. However, the presidential race is set to have a growing impact on politics.

The Aussie is battling 0.6720, which was a low point in October. It is followed by 0.6680, which provided support in early February, and by the decade trough of 0.6662 recorded recently. The round level of 0.66 is the next level to watch. 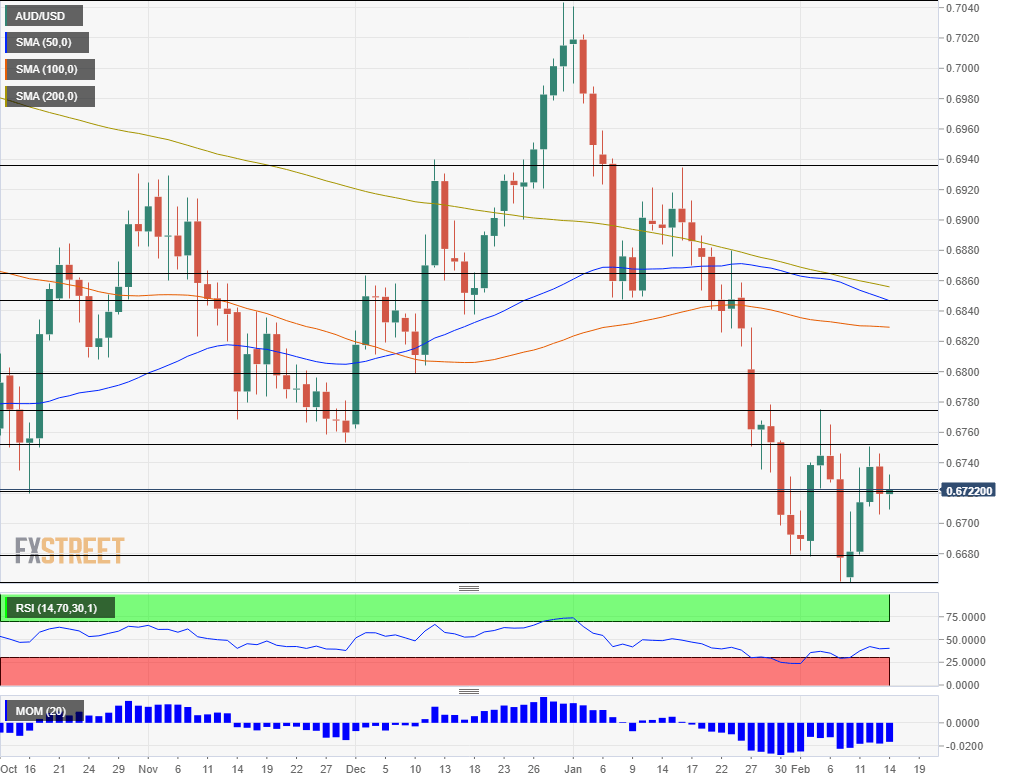 While markets are calmer around the coronavirus disease, it has yet to peak. After the recent bounce, AUD/USD may have some room to fall, especially if the jobs report disappoints.

The FX Poll is showing that experts are foreseeing lower AUD/USD levels in the upcoming week rising levels afterward. The average targets have been upgraded, especially in the short term. 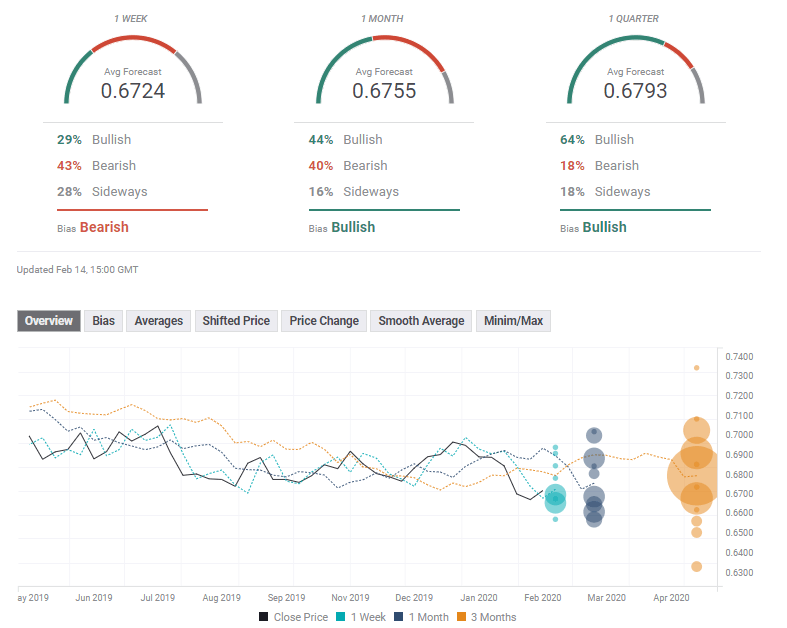 Get the 5 most predictable currency pairs
Previous ArticleBitcoin Cash Price Analysis: 500.00 is the next big hurdle
Next Article Samsung adds ETH and BTC support on the upcoming smartphone