Home » AUD/USD: how much gas is left in the bull’s tank – bulls will be needing refueling on the 0.73 handle

AUD/USD: how much gas is left in the bull’s tank – bulls will be needing refueling on the 0.73 handle

More wind in the sails of the commodity complex

The weakness in the greenback is blowing more wind into the sails of the commodity complex with the CRB index extending its June rally from down at 164.54. The index is now en-route to 193.65, (currently trading at 192.88, just below the 192.98 high for today’s business so far and inches away from the daily trend line resistance). This index has been comprised of a basket of 19 commodities, with 39% allocated to energy contracts, 41% to agriculture, 7% to precious metals and 13% to industrial metals, all of which the Aussie is linked closely to and serves well as a measure of how the complex is faring in general. WTI crude oil is standing out with a fresh at 71.33 scored earlier (albeit currently sinking back to a low of 70.18 at the time of writing).

Looking around elsewhere, European bourses had a positive session with the German Dax up 0.9%, the UK’s FTSE up by 0.5% and France’s CAC up by 1.1%. Spain’s Ibex was also up by 1.1% and even Italy’s FTSE MIB was higher by a good 0.51% despite the budget concerns.

Markets are well and truly risk on, with both the S&P and the Dow at new session highs at the time of writing and extending the record high levels. AUD/USD is subsequently trading with volume and sellers are nowhere to be seen in comparison. There was a relatively large offer from 0.7288 at the start of NY trade with a strong close on the hourly time frames but bulls stepped up to the mark and remain in control.

Back to the question as to why all of the sudden dollar weakness?

So, back to the question as to why all of the sudden dollar weakness? That is very hard to reconcile whereby it had been performing on pure good old fashioned economic fundamentals – The US economy is running at full steam, in stark contrast to that of China’s and leagues ahead of those G7’s such as the UK which has been progressing along in the right direction, but at a far slower pace. At the same time, investors are ignoring the elephant in the room, the EM complex, risks of higher US rates, trade wars/protectionism risks, all of which could all blow up in the faces of such currencies as the Aussie that trades as a proxy to what goes down in China town as well as what happens in the emerging market’s scene.

However, Morgan Stanley wrote today about the threat of rising US current account deficits and trade deficit growth which has been a prominent feature in the doomsdayers theories over the years, (albeit with fair credence), although is that really something that the market should be factoring in, all of a sudden?

With the FOMC around the corner and the threat of prolonged disputes between China and the US over trade, one might wish to question how much gas there is left in the tank of the commodity complex’s resurgence? 0.7300 is going to be a critical handle in AUD/USD – at least we can be certain about that.

Analysts at Commerzbank explained that AUD/USD is bid very near term: 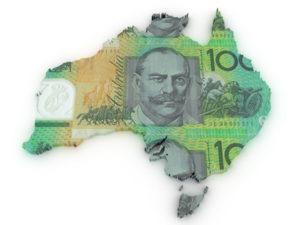 USD/JPY stays on track to record its highest daily close in 2-months near 112.50

AUD/USD bulls have continued their crusade as the USD/CNH loses further ground, slipping from 6.8637, (extending the decline from 6.8927 earlier this week and off 2018's high at 6.9584). The greenback dropped from 94.72 highs yesterday and has made fresh 2-month lows, ( as the market falls out of favour with it - which, not so much begs the question as to - "why?',  but, "why all of a sudden?"), and bears are lining up for a break of the 93.71 9th July lows. More wind in the sails of the commodity complex The weakness in the greenback is blowing…