The Australian dollar benefited from the encouraging coronavirus situation at home and upbeat figures from Australian and China  However, worsening Sino-American relations and concerns about the US economy limited further gains. Australia’s jobs report, Chinese industrial output, and US retail sales are eyed in addition to the disease dynamics.

This week in AUD/USD:

Australia continues holding COVID-19 below 7,000 cases and 100 deaths at the time of writing, flattening the curve, and keeping it crushed. That has allowed further reopening of the economy, albeit each state has its specificities. A “travel bubble” discussed with New Zealand has been called off for now, but it remains on the list.

The Reserve Bank of Australia left the interest rate unchanged at 0.25% as expected and remained cautiously optimistic. While it acknowledged the impact of the disease on the global and local economies, it is in no rush to add stimulus. That supported the Aussie.

Economic figures from the land down under also kept the A$ bid. April’s trade balance surplus surpassed A$10 billion, and finally, retail sales figures for March were upgraded to a leap of 8.5%. China, Australia’s No. 1 trading partner, reported a surprising increase in exports but a fall in imports.

The Aussie’s advance was curbed by worsening Sino-American relations. Both President Donald Trump and Secretary of State Mike Pompeo suggested that the coronavirus escaped a lab in Wuhan, China, rather than leaping from animals to humans. Trump also promised to verify if Beijing was fulfilling its obligations in the trade deal and threatened to cancel it. A drop in global trade and the risk-off environment is detrimental for the Aussie.

April’s Non-Farm Payrolls were horrible, yet markets had already priced them in. The US lost 20.5 million jobs and the Unemployment Rate jumped to 14.7%. Nevertheless, the response was muted.

Unless there is a surprising second wave in Australia, the pace of reopening could have an impact on the Aussie, with the gradual return to normality supporting the Aussie. The central government publishes its budget on Tuesday, and the more stimulus, the better. Prime Minister Scott Morrison has the opportunity to invest in these times of trouble.

Wednesday’s quarterly Wage Price Index release for the first quarter provides a first look into the labor market, yet no earth-shattering change is on the cards.

The highlight of the week is due out on Thursday, with the labor figures for April. Economists are expecting a considerable loss of jobs, yet minuscule in comparison to the crushing seen in other developed economies. Australia’s unemployment rate will likely remain well below 6%. However, it is essential to note that the range of estimates is likely broader than usual, and surprises cannot be ruled out.

Last but not least, China’s industrial output statistics for April will likely show a monthly increase and perhaps also a yearly one. Factories had mostly returned to activity last month, yet consumers remain reluctant to go out and about, fearing the disease. Even an authoritarian regime like China’s cannot force people to eat out.

Here the most prominent Australian and Chinese releases on the economic calendar: 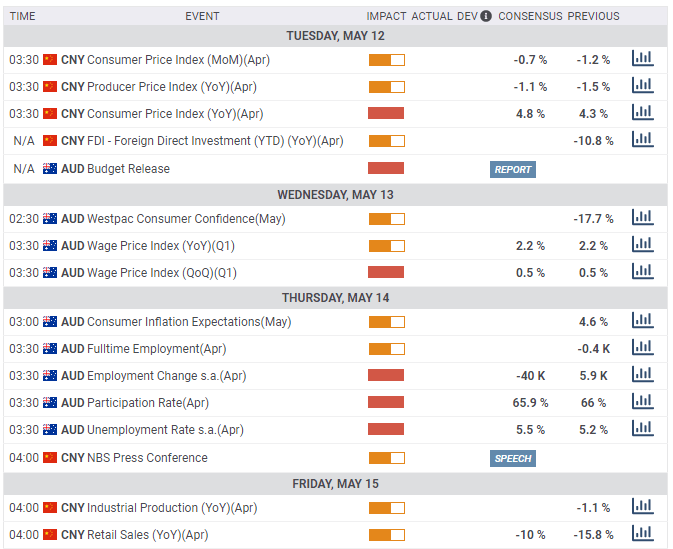 US events: Reopening, retail sales, and relations with China

There is bipartisan criticism in the US against China, and President Trump will likely continue attacking the world’s second-largest economy. While this remains in the realm of politics and rhetoric, investors could learn to shrug it off. However, moving toward new tariffs or canceling the trade agreement could deal a blow to sentiment and the Aussie, a risk currency.

Additional US states will ease their lockdowns on May 11, boosting economic activity but also risking the second wave of infections. COVID-19 statistics remain elevated outside the New York region while tracing and testing are mostly lagging what experts deem necessary. Will it affect the market mood?

The US economy is suffering, and further evidence of that will likely be seen in the retail sales numbers for April, which could experience double-digit falls after tumbling in March by over 8%. Apart from being unable to shop outside, mass unemployment and uncertainty have also kept consumers from spending.

Are things improving moving forward? The University of Michigan’s preliminary Consumer Sentiment data for May could bounce or at least stabilize after crashing.

Ahead of Friday’s spending data, inflation figures could show a substantial fall in headline inflation, as energy prices tumbled last month. The Core Consumer Price Index has probably dropped below the 2% level, which is eyed by the Fed.

Weekly jobless claims will likely remain in the millions, yet their impact will probably be muted just after the Non-Farm Payrolls. Continuing claims are set to continue accumulating. 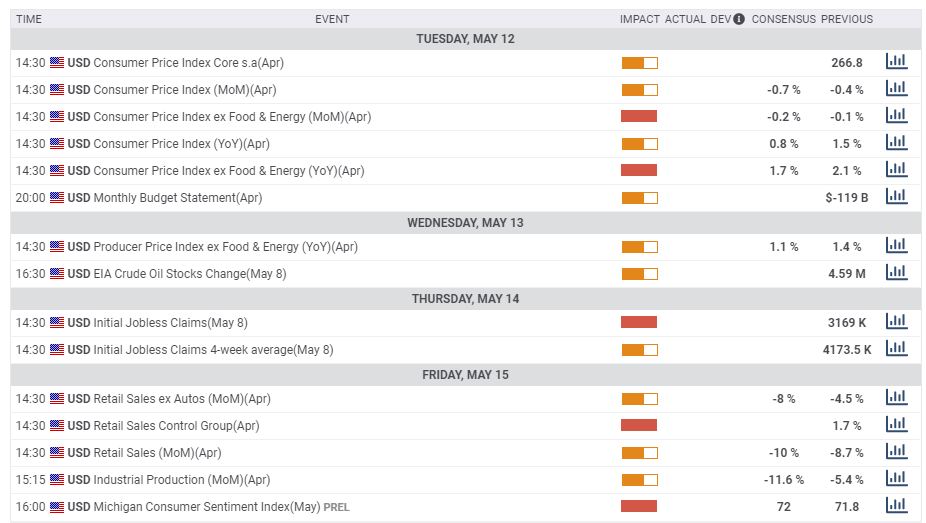 Aussie/USD has slipped out of the uptrend channel that has accompanied it since mid-March, and momentum on the daily chart has softened. The currency pair trades above the 50-day Simple Moving Average but below the 100 and 200-day ones. All in all, the picture has become more bearish.

After the rally and going sideways, will global gloom finally hit the Aussie? Or is Australia’s strength enough to keep the currency pair bid? The downside seems more appealing, but perhaps not instantly.

The FXStreet Forecast Poll is showing that experts have upgraded their forecasts but on average, still remain bearish in all timeframes. The rise of 1,000 pips from the lows is still baffling. 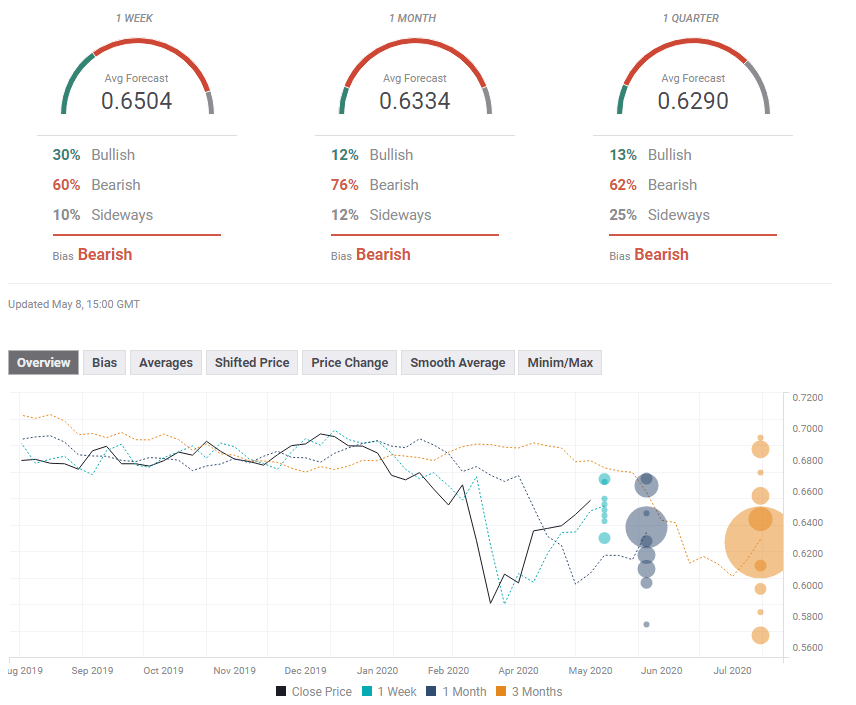 Get the 5 most predictable currency pairs
Previous ArticleForex Today: PM Johnson to set the tone for the Asian session
Next Article Gold Price Analysis: Bulls need to blast $1,708 to avoid a fall – Confluence Detector