Bitcoin’s mainstream adoption has soared over the last couple of months, with institutions like Visa, Goldman Sachs, Morgan Stanley, and others dipping their toes in the BTC markets. Likewise, prices look primed to advance further despite the ongoing consolidation phase.

Eastern markets in the spotlight

The “kimchi premium” refers to the difference between the BTC/KRW and the BTC/USD trading pairs. Different factors like domestic capital controls, limitations of Korean exchanges, and retail demand tend to affect the price of Bitcoin against the South Korean won relative to other fiat currencies.

History shows that spikes in the BTC/KRW premium occur during bull runs and often before market corrections. The kimchi premium recently surged by 18%, causing panic among market participants.

As fears of a potential steep correction surged, Bitcoin price remained range-bound, trading between $60,103 and $54,892 over the past ten days.

Adding fuel to the FUD, billionaire Peter Thiel questioned whether Bitcoin could be a “Chinese financial weapon” and urged the U.S. government to consider tighter regulations.

I do wonder whether at this point, Bitcoin should also be thought [of]in part as a Chinese financial weapon against the U.S”¦ If China’s long Bitcoin, perhaps from a geopolitical perspective, the U.S. should be asking some tougher questions about exactly how that works.

Thiel’s remarks come after China has managed to control for more than 65% of the Bitcoin network’s hashing power.

Such high levels of concentration have been a focal point of concern for several years. Especially when considering that the U.S. hashrate share is nearly nine times smaller than that of China and most mining equipment manufacturers are headquartered in the Asian nation.

Regardless of Thiel’s call for more regulation on crypto, Hester Peirce, Commissioner of the U.S. Securities and Exchange Commission (SEC), affirmed that the U.S. has moved past the point of banning Bitcoin.

The so-called ‘Crypto Mom’ believes the pioneer cryptocurrency’s decentralized nature would likely outpace any attempt to limit its use, so “it would be a foolish thing for the government to try to do that.” Instead, Peirce vowed more adoption toward the approval of a Bitcoin ETF.

In the three years that I’ve been in the Commission, the (Bitcoin) market has matured tremendously.

Pierce maintains that direct involvement of institutions in Bitcoin is making things “comfortable about the underlying markets,” hinting about how regulators have cozied up to the idea of a Bitcoin ETF.

Bitcoin price has remained stagnant over the past ten days, which allowed the 20-week Simple Moving Average (SMA) to climb up to $40,450. Investors should keep a close eye on this trend-following indicator. It served as a critical support level during previous bull runs allowing buyers to scoop up more BTC at a discount.

The daily chart shows that even though BTC has been losing steam, the emergence of an ascending parallel channel also kept prices at bay during the most recent correction.

On the other hand, the weekly chart reveals the formation of an ascending triangle pattern. A breakout from the triangle’s x-axis at $59,090 could propel BTC by 27% to a new all-time high of $75,163.

Interestingly, this bullish target coincides with the 141.4% Fibonacci extension level. 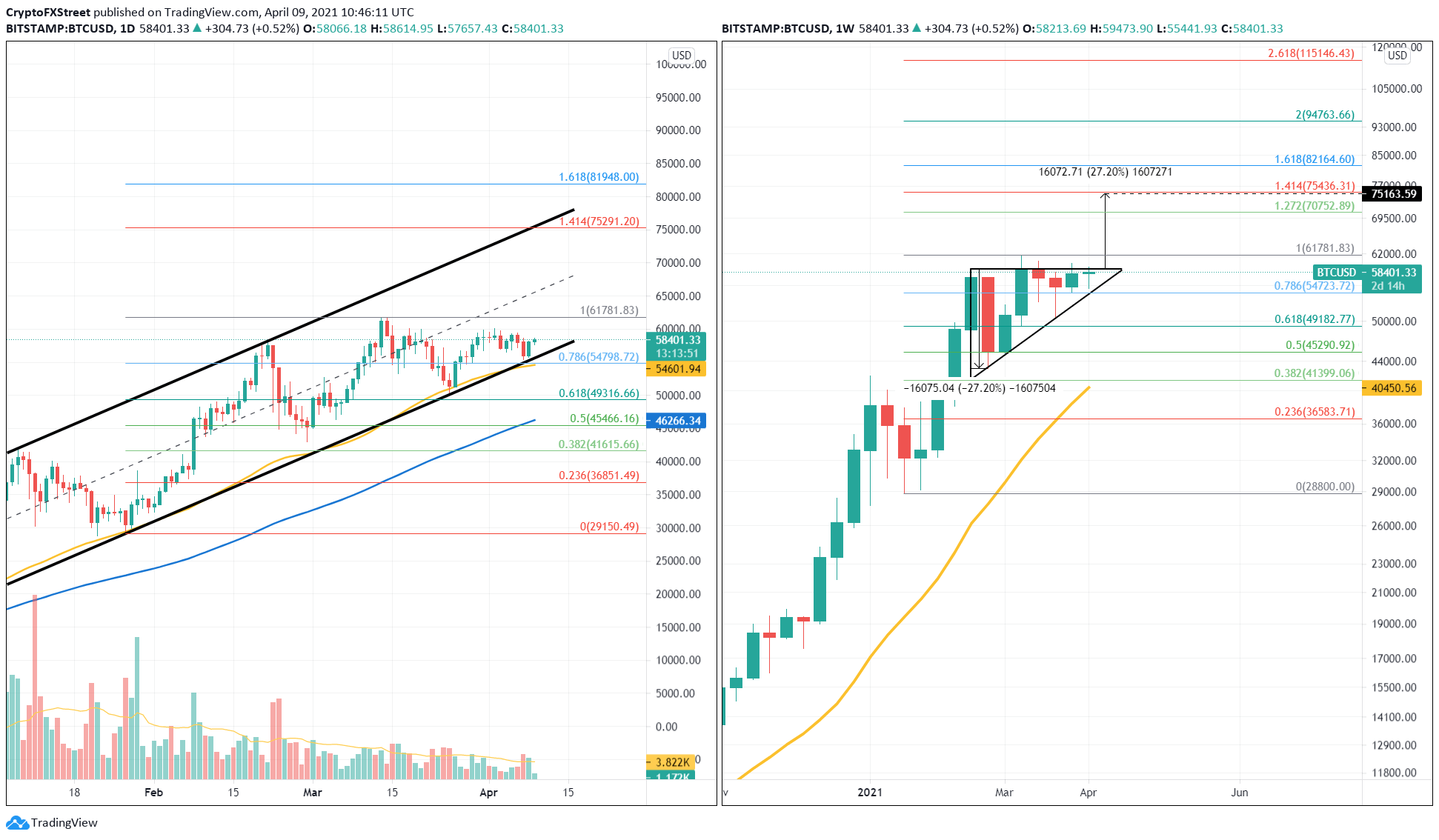 The last few weeks have seen a choppy price action due to investors’ overleveraged long and short positions. The recent surge in Bitcoin’s Open Interest to $77 billion, combined with resetting funding rates, suggests that such market participants will be scarce.

Hence, going forward, Bitcoin will most likely move out of the consolidation period and enter a price discovery mode.

While everything seems to be looking up for Bitcoin, the Pi Cycle Top indicator hints at an incoming reversal.

This index consists of the 111-day SMA and 350-day SMA with a standard deviation of two plotted against the Bitcoin price. The last three times the short SMA moved above the long SMA, it has signaled a cycle top to within three days.

Now, these moving averages have moved eerily close to each other, indicating that a death cross might soon occur. 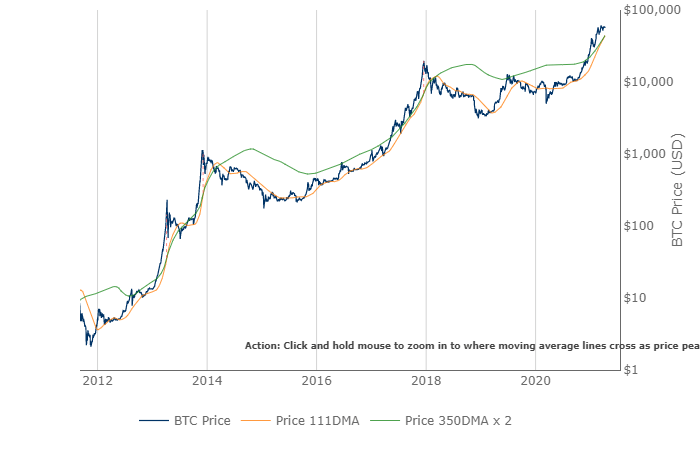 If this were to happen, Bitcoin price could be due for a downswing. But according to Bloomberg’s most recent crypto report, “baseline support has risen toward $50,000 in Bitcoin, with $40,000 representing more extreme downside risk.”

Bitcoin adoption takes off as institutions continue to jump on the digital currency bandwagon. PayPal co-founder Peter Thiel labels BTC as China's "Financial Weapon" against the U.S. dollar. Bitcoin price could be due for a massive move as key on-chain metrics reset and others turn bullish. Bitcoin's mainstream adoption has soared over the last couple of months, with institutions like Visa, Goldman Sachs, Morgan Stanley, and others dipping their toes in the BTC markets. Likewise, prices look primed to advance further despite the ongoing consolidation phase. Eastern markets in the spotlight   The "kimchi premium" refers to the difference between…