Latest
You are at:Home»Opinions»Bitcoin’s narrowing range implies imminent explosion, but to where to?

Bitcoin had a stable start to the fourth quarter of the year, trading in a narrowing range. The most significant development of the week came from Mike Novogratz. The Fortress hedge-fund manager and current cryptocurrency investor is not as enthusiastic as he used to be. He said, “don’t think it breaks $9,000 this year.” He did predict that the BTC/USD will exceed $10,000 by the end of the second quarter of 2019. The primary driver of crypto prices will come from institutional investors.

Elsewhere, Valencia’s port will explore using blockchain technology. The Spanish city is home to one of the biggest ports in Europe. The Italian Banking Association completed the first test of blockchain technology for interbank communication. Deloitte, one of the world’s top consultancies, outlined five major obstacles to the mainstream adoption of Bitcoin. The EU Financial regulator allocated over one million euros for fintech and crypto supervision, showing the growing importance of the technology.

All in all, there have been exciting developments, but price action has been minimal. The big mover, as usual, would be that approval of a Bitcoin ETF, but that may take a long time.

Get 24/7 Crypto updates in our social media channels: Give us a follow at @FXSCrypto and our FXStreet Crypto Trading Telegram channel

BTC/USD Technical Analysis – Consolidation may lead to an explosion 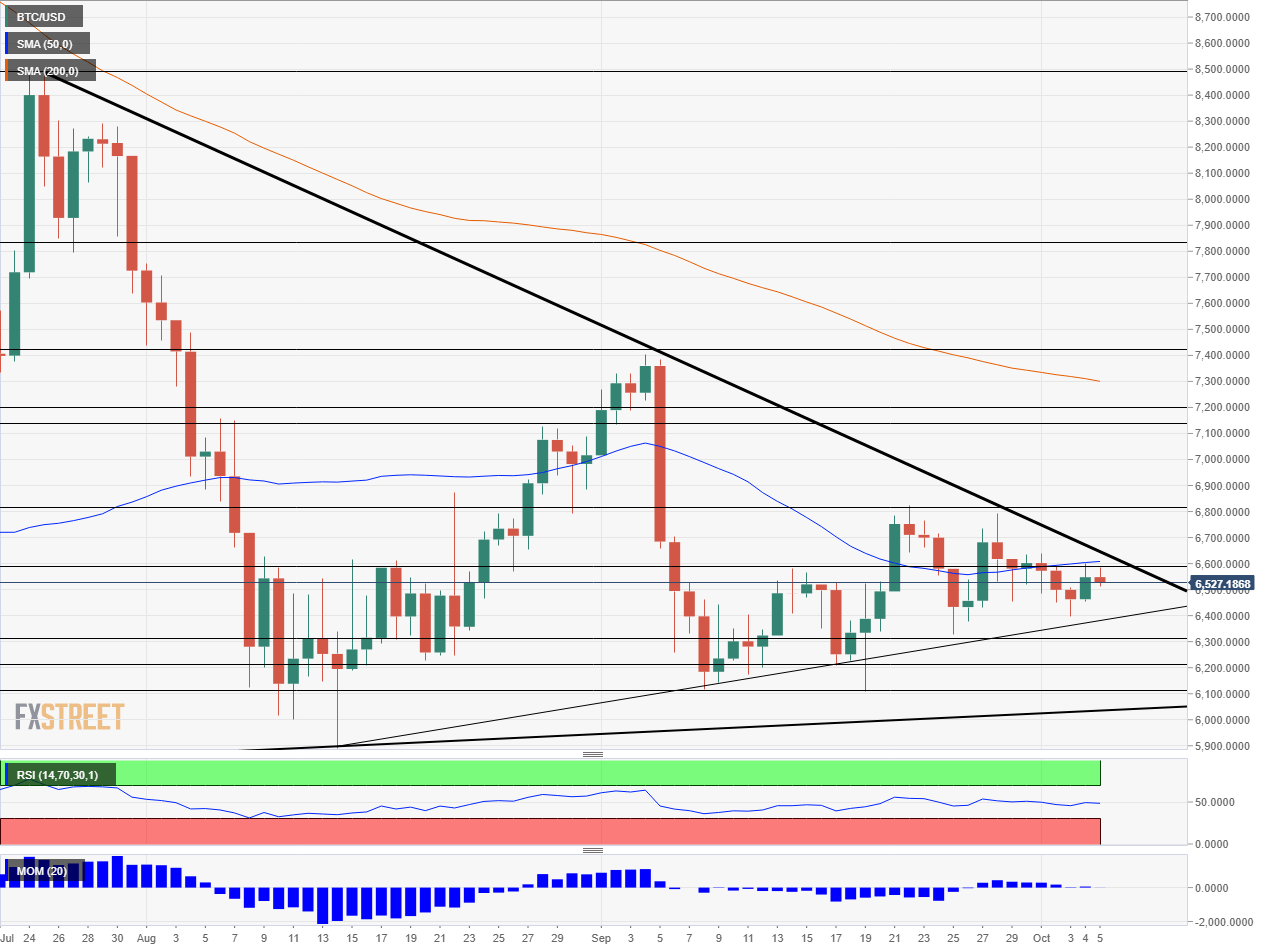 The technical picture for Bitcoin is fully balanced. The Relative Strength Index on the daily chart is around 50, Momentum is nowhere to be seen, and both downtrend resistance and uptrend support are narrowing. Technical analysis textbooks suggest that the price will eventually choose a direction and when that happens, the movement will be very sharp. But to what direction?

Downtrend resistance is more significant than uptrend support as it touched the price more times and began earlier. At the time of writing, it is hovering just above $6,600. Uptrend support is currently just under $6,400. Note that there is a second, longer-term uptrend support line that dates back to June.

$6,600 capped the pair in recent days and also in early September. The 50-day SMA is around this level. $6,800 is a strong line of resistance. The BTC/USD halted twice around this line in September, and the level also served as support in late August.

$7,150 worked in both ways in late August and early September when the pair traded at higher ground, and it is closely followed by $7,200. $7,400 was the peak at the beginning of last month.