Latest
You are at:Home»Forex News»Can EUR/USD recover with German data?

Good news from Germany – finally. Or at least better than feared, and the euro is responding positively. Markit’s forward-looking Purchasing Managers’ Index for the manufacturing sector has risen to 43.6 points in the preliminary read for August, above 43 expected. It is essential to remember that any score below 50 represents contraction – which has been the sector’s fate since early 2019. Nevertheless – and together with a better-than-projected score of 54.4 in the services PMI – it reflects a rebound of sorts in the euro zone’s largest economy.

Earlier, France’s manufacturing PMI returned to expansion territory with 51 points and services PMI exceeded projections with 53.3. EUR/USD has been on the rise and trades above 1.1100 at the time of writing.

Will these surveys sway the European Central Bank to refrain from introducing a heavy dose of monetary stimulus? Before we learn about future policies in September, the meeting minutes from the latest encounter in July will shed some light on the bank’s thinking. Back then, ECB President Mario Draghi painted a gloomy picture and set the stage for a rate cut and perhaps a resumption of the bond-buying scheme in the critical September meeting.

In the US, the Federal Reserve’s own meeting minutes from the July 31st meeting struck a balanced tone. Most central bankers coalesced around cutting interest rates and framing it as a “mid-cycle adjustment” – refraining from further imminent cuts. However, some rejected the move, and a couple wanted a 50bp slash – double the standard 25bp cut. Given the balanced tone and Fed Chair Jerome Powell’s upcoming Jackson Hole speech – the market reaction was muted.

One of the most significant drivers for cutting rates has been the trade war between the US and China. President Donald Trump has reiterated his stance that he is “not yet ready” to make a deal with the world’s second-largest economy. He also stated that he is “the chosen one” when it comes to tackling the economic giant – a statement that raised many eyebrows.

Beijing has reiterated its position that it will retaliate against US companies if Washington moves forward with new tariffs on September 1st ahead of high-level talks later next month.

EUR/USD trading will likely be dominated by speculation about the next moves of central banks. 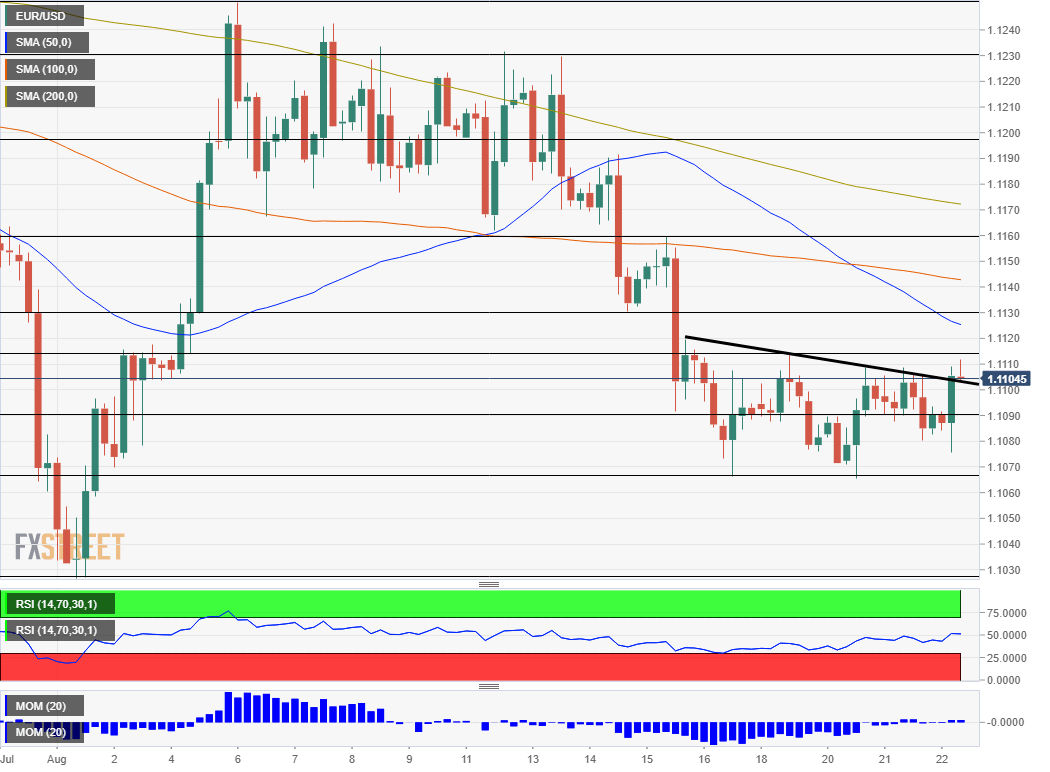 EUR/USD is attempting to move above the downtrend resistance line that has accompanied it since late last week – a bullish sign. Momentum is marginally positive, but the currency pair trades below the 50, 100, and 200 Simple Moving Averages. All in all, the picture is mixed.