The collapse in the price of oil and also some  not-so-impressing jobs data in Canada weighed on the Canadian dollar.

After USD/CAD  got very close to 1.15, what’s next for the pair? Analysts weigh in:

The Canadian dollar fell to new five-and a half year low around C$1.1500 Tuesday, weighed by the recent slide in oil prices and overall commodity price weakness.

While subsequently the loonie has recovered modestly, analysts do not rule out further weakness in the sessions to come, especially if crude oil prices continue to decline.

The earlier dollar-Canada high was the weakest loonie level since July 2009, when the pair topped out around C$1.1725.

“Yesterday’s daily close above C$1.1465 has reinforced the intermediate uptrend in USD/CAD,” and shifts the focus to the “channel top at C$1.1577 as the next resistance levels,” said George Davis, chief FIC technical analyst at RBC Capital Markets.

With the current uptrend in place, “valuation driven pullbacks” to C$1.1278 support and “the channel base at C$1.1198,” will likely attract buyers, he said.

RBCCM’s medium-term technical price target is C$1.1650, based on their long-held bullish view.

“While a daily close below C$1.1198 would cause us to shift to a more neutral outlook, we stress that a close below key long-term trendline support (dating back to 2012) at C$1.0851 is required to nullify the broader uptrend,” Davis said.

The 40%-plus decline in oil prices since June is a clear negative for both the loonie and Canadian stocks, said Doug Porter, chief economist and Robert Kavcic, senior economist at BMO Capital Markets.

“We have long maintained that for every $10 move in oil prices, the loonie makes a parallel move of about 3-5 cents; The currency has sagged about 7 cents since June, suggesting there’s potentially more weakness to come as oil prices have dropped around $40,” they said in a note.

Currently, the C$ is “mildly above fair value based on today’s commodity prices,” they said.

“Note that the parallel drop in the currency softens the blow from lower oil prices for both real growth (as it supports non-oil exports) and government finances (as revenues are driven by energy prices in C$ terms),” Porter and Kavcic said.

“This is mainly a composition story, with the energy sector weighing in at more than 20% of the index despite losing almost 30% of its market value in recent months,” they said.

In comparison, the U.S. energy sector makes up less than 10% of the S&P 500, Porter and Kavcic added.

There is event risk Wednesday, when the Bank of Canada is scheduled to release its semi-annual Financial System Review, followed by a press conference by BOC Governor Stephen Poloz and Senior Deputy Governor Carolyn Wilkins.

Then Thursday, Governor Poloz will address the Economic Club of New York at 8:00 a.m. ET, with the text on the website at 7:45 a.m. ET. His topic is “The Future of Finance” and there will be Q&A.

On December 3, the BOC left the overnight target rate unchanged at 1.0%.

The accompanying statement noted that “Canada’s economy is showing signs of broadening recovery” and that the net effect of recent developments is that “the output gap appears to be smaller than the Bank had projected in the October Monetary Policy Report (MPR); however, the labor market continues to indicate significant slack in the economy.”

While weak oil prices are an “important down side risk to the inflation profile,” this factor “is tempered by a stronger U.S. economy, Canadian dollar depreciation and recent federal fiscal measures,” the BOC statement said.

“We think it would take a Fed signal that it could hike as soon as March to push dollar-Canada permanently above C$1.1500,” the strategists said.

CIBC World Markets strategists leaned towards the Fed hiking rates in spring 2015, with no move by the BOC until late next year, “when the U.S. funds rate reaches the existing 1% overnight rate in Canada.”

“Even assuming an $80 average price for WTI in the coming year, we estimate that the terms of trade hit will knock a further three cents off our exchange rate call,” they said. 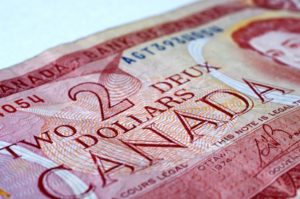 The collapse in the price of oil and also some  not-so-impressing jobs data in Canada weighed on the Canadian dollar. After USD/CAD  got very close to 1.15, what's next for the pair? Analysts weigh in: Here is their view, courtesy of eFXnews: The Canadian dollar fell to new five-and a half year low around C$1.1500 Tuesday, weighed by the recent slide in oil prices and overall commodity price weakness. While subsequently the loonie has recovered modestly, analysts do not rule out further weakness in the sessions to come, especially if crude oil prices continue to decline. Dollar-Canada was trading at…