Home » Canadian Dollar Losing its Lustre as the Commodity Super

Canadian Dollar Losing its Lustre as the Commodity Super

Canada is a major producer and exporter of natural resources, which means its currency is closely tied to the fortunes of commodity prices. With signs that the commodity super-cycle is fading it is likely that CAD will notch up further losses over the course of 2014.

A series of economic reforms dating back to the 1990s and the commodity super-cycle triggered by the demand shock from China – helped the Loonie scale incredible highs. CAD like other major commodity currencies, such as AUD, BRL, ZAR and even NOK, are now giving back earlier gains.

Ageing populations in   the major consuming economies, including China, will slow the pace of consumption of natural resources in the years ahead.

Meanwhile, considerable investment in new commodity producing capacity and the fracking revolution are also potential bearish factors for commodity prices over the long-term.

Across the border in the US it’s finally a different and more bullish story. There the economy appears to be picking up steam pulled along by exports, a more confident consumer and the fracking revolution, which is delivering cheaper energy to US businesses and households. As such the US Federal Reserve feels confident enough to taper its bond purchasing programme.

Notwithstanding the country’s real estate boom, which appears to be losing momentum, the Bank of Canada is more likely to lean towards a more dovish monetary policy than the Fed over the course of the year. Potential targets for USD/CAD are 1.1057, 1.1100 and maybe even 1.1700.

But following its recent very rapid rise USD/CAD is looking over-bought suggesting a pull-back or period of consolidation is due in the short-term. A break out on from that pattern, once it is formed, would be a good opportunity to go long USD/CAD.

USD/CAD looks set for consolidation before resuming its rally

Another popular cross is GBP/CAD. If CAD is a bet on commodities then GBP is in large part a punt on financial services. Admittedly, with a likely lower long-term trend in global growth and more stringent regulation, financial services are unlikely to sustainably grow again at the pace they have since the 1980s.

But from the perspective of the 2007-2008 financial crisis the sector is recovering and with it the UK economy.   Also, a trend towards lower commodity prices would boost UK and US consumer disposable incomes, which is good for the economies of both countries. In effect it means lower inflows of capital into commodity producers such as Canada, which now has its largest current account deficit in 20 years. 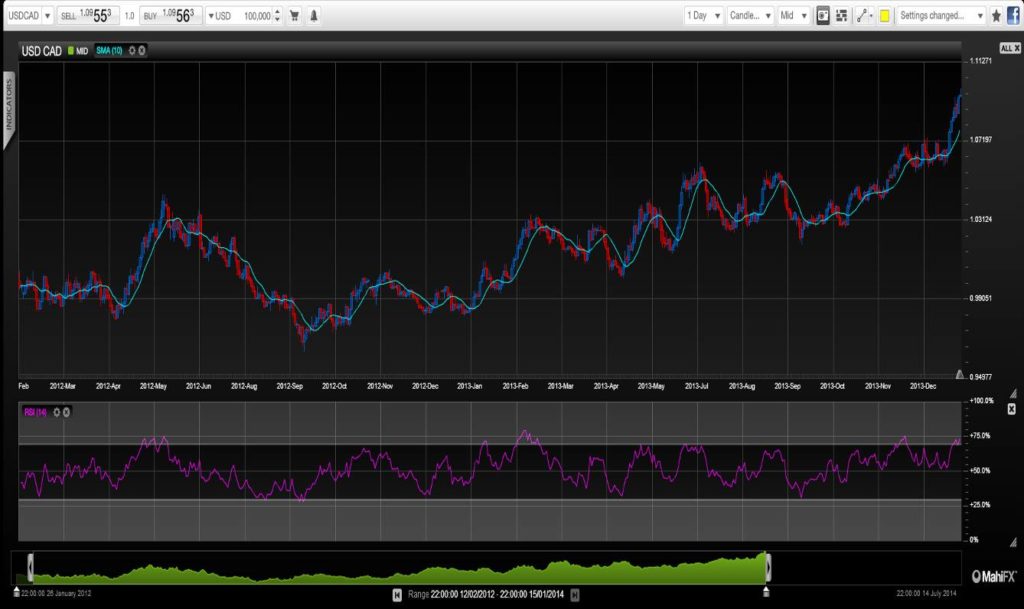 Since March 2013 GBP/CAD has been notching up spectacular gains thanks in part to the long awaited recovery in the UK economy and the pick-up in its real estate market, which is now in full swing.

The pair have bounced off highs of 1.8043 with nearby support placed around 1.7785. If anything GBP/CAD looks as if it has already entered a consolidation phase following the break out from an earlier congestion pattern last week.

From now on, upward progress of USD/CAD and GBP/CAD depends on both countries showing sustained and strong economic growth at least compared with the last five years.

However, there are some caveats regarding ongoing GBP gains. Firstly, the Bank of England seems keen to keep GBP/USD below 1.7000 for fear of endangering exports. Talking down GBP/USD also impacts other crosses. Secondly, UK inflation has been gliding back towards the bank’s target of 2%, which takes the pressure off having to tighten monetary policy.

Thirdly, the UK is hindered by a large and growing current account deficit, now at a 24-year high. This saps GDP growth and leaves GBP vulnerable to a vicious sell-off should the global environment swing back to ‘risk on’ mode or the UK recovery starts to falter badly. 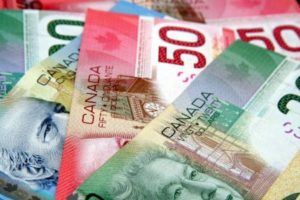 Canada is a major producer and exporter of natural resources, which means its currency is closely tied to the fortunes of commodity prices. With signs that the commodity super-cycle is fading it is likely that CAD will notch up further losses over the course of 2014. A series of economic reforms dating back to the 1990s and the commodity super-cycle triggered by the demand shock from China - helped the Loonie scale incredible highs. CAD like other major commodity currencies, such as AUD, BRL, ZAR and even NOK, are now giving back earlier gains. Ageing populations in   the major…