Update: Churchill Capital Corp IV (NYSE: CCIV) has corrected higher from the session lows and has penetrated the 26th Jan highs to score 25.97. Fundamentally, investors are still waiting for the merger news, however, a Reddit bid could be at play. meanwhile,m form a technical perspective, critically, the price is holding in the bullish territory at resistance and is underpinned by bullish 10 and 20 moving averages on the 4-hour and 1-hour time frames. If 24.90 holds as new support, (old highs), by measuring the correction’s range between the 25th highs and lows, by using the Fibonacci tool, a -0.272% retracement offers a feasible target of 31.13 on the upside which guards a -0.618% target at 34.38.

Update: Will Churchill Capital Corp IV (NYSE: CCIV) indeed merge with Lucid Motors? Investors are having growing doubts and have been pushing stocks lower – by 13.46% on Wednesday to $21.15. Thursday’s premarket trading is pointing to another drop of around 6%. Some are also concerned that Saudi Arabia’s sovereign wealth fund may pour more funds into Lucid – a potential “Tesla killer” – and therefore make the SPAC merger with Churchill obsolete. Another factor weighing on the broader Electric Vehicle market is Tesla’s earnings, which missed the mark and are not only dragging Elon Musk’s firm lower but the whole field. Moreover, developments around Gamestop are also taking their toll. See Should I buy GameStop (GME Stock) right now? 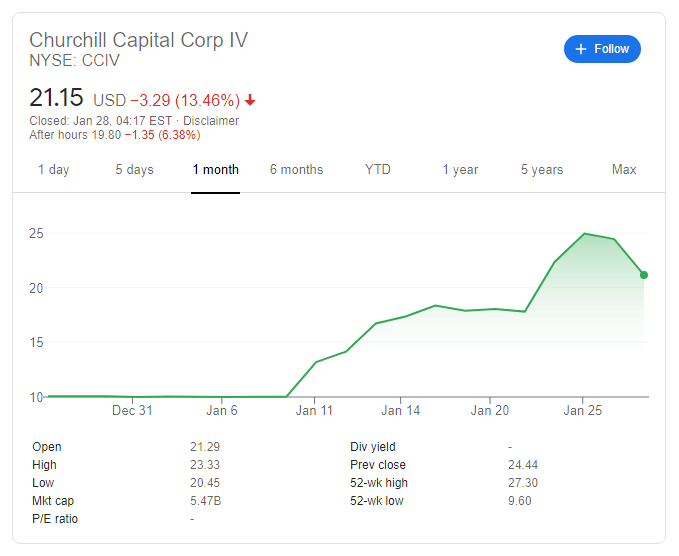 Update: Churchill Capital Corp IV (NYSE: CCIV)  has closed Tuesday’s trading at $24.44, a slide of 2.04%. Wednesday’s premarket trading is pointing to another dip, albeit a minuscule one of only 0.53%. This decline comes after shares of the investment vehicle company hit an all-time high of $27.30 – but more than doubling from around $10 recorded in mid-January. The retreat from the peak serves as a natural correction after the leap and also exposes nervous traders – which are waiting impatiently for the merger. Despite several media reports, the SPAC merger between Churchill and Lucid Motors has yet to materialize. Is there only smoke without fire or is a deal around the corner? Lucid’s polished luxury electric vehicles are set to pose competition to Elon Musk’s Tesla. . More 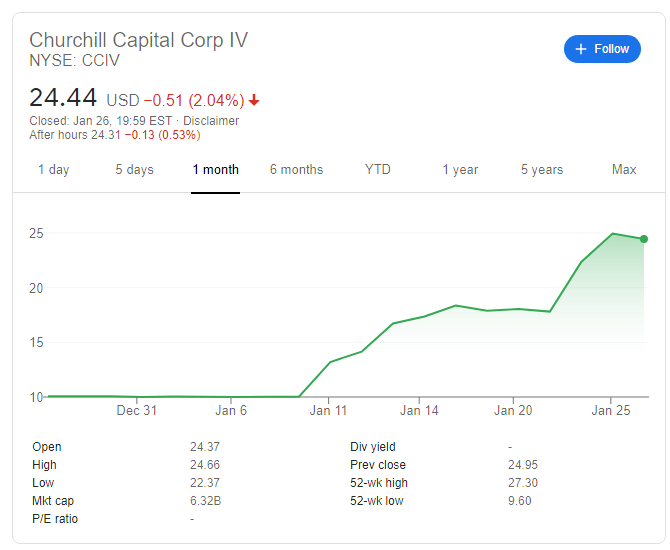 Update: Churchill Capital Corp IV (NYSE: CCIV) has risen by 11.63% on Monday, closing at $24.95 after already hitting a high of $27.30. It is essential to note that the holding company’s value has been rising at a rapid clip in recent days and has reached a valuation of $6.4 billion. Some investors are opting to cash in on profits, with Tuesday’s premarket trading pointing to a drop of around 3% to below $24.50. Are some investors worried that Churchill would be unable to buy into Lucid Motors? Officially, all sides involved remain silent. Nevertheless, if the SPAC merger does go through, Lucid could pose substantial competition to Tesla. The Arizona-based electric vehicle firm is producing luxury cars that may outshine Elon Musk’s models.

Chinese electric vehicles out, a new American one in? Churchill Capital Corp IV (NYSE: CCIV) is a Special Purpose Acquisition Company (SPAC) – or “blank check” –company with no business behind it. However, various press reports suggest that Churchill is on the verge of a merge with Lucid Motors – and that may be exciting.

Lucid’s CEO Peter Rawlinson is the engineer behind Tesla’s Model S, and his new venture may compete with Elon Musk’s firm. The company is a smaller one that is working gradually and has its feet on the ground – contrary to Musk’s often ambitious and unachievable financial goals.

For investors, the fact that Lucid Motors is currently small serves as motivation to jump into a potential growth story. Rawlinson’s firm aims to produce 400,000 vehicles using just-in-time supply chains.

Will the merger go through? Investors could be disappointed if nothing happens on Monday, but if fresh media reports suggest that talks are on the cusp of an agreement, could keep CCIV shares bid. 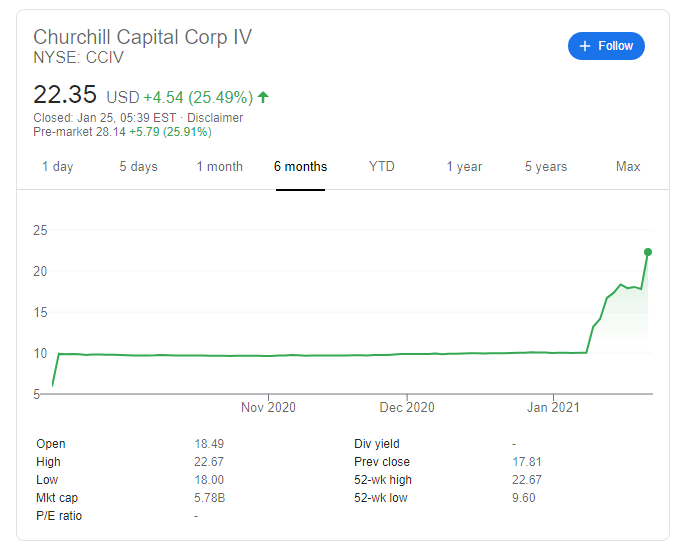 NYSE: CCIV is set to continue rising while hopes for the Lucid Motors SPAC merger are high. If it does happen, the focus will likely shift to the prospects of the emerging EV company. Investors have been eyeing Nio, Nikola, Li Auto, and others, and have scarce knowledge about Lucid.

Currently, Churchill Capital Corp IV is valued at under $6 billion, which seems minuscule in comparison to other firms. Will these competitors suffer from the shift in focus?

NYSE: CCIV is set to extend its gains by over 20% on Monday. Speculation about an imminent merger with Lucid Motors is behind the upswing.  The "Tesla-killer" electric vehicle company could draw investor attention from other shares. Update: Churchill Capital Corp IV (NYSE: CCIV) has corrected higher from the session lows and has penetrated the 26th Jan highs to score 25.97. Fundamentally, investors are still waiting for the merger news, however, a Reddit bid could be at play. meanwhile,m form a technical perspective, critically, the price is holding in the bullish territory at resistance and is underpinned by bullish 10 and 20…