These are the main highlights of the CFTC Positioning Report for the week ended on July 28th:

–       Net longs in EUR reached the highest level since late December 2011 at around 157.6K contracts, helped by gross longs advancing for the fourth consecutive week vs. the choppy performance in gross shorts. The recent deal on the European Recovery Fund plus solid buying bias and the prospects of a strong recovery in the region continued to sustain the inflows into the shared currency.

–       USD net shorts rose to levels last seen in early December 2017. Speculators increased their negative exposure to the buck ahead of the FOMC meeting, while the exodus from the safe haven universe and the dovish stance from the Federal Reserve kept punishing the greenback for yet another week.

–       Still around the safe havens, net longs in JPY and CHF advanced to the highest level since June 9, supporting investors’ move to these safe currencies in detriment of the dollar.

–       Net shorts in GBP rose to 3-week tops on the back of the resurgence of Brexit concerns, jitters surrounding the EU-UK trade negotiation and uncertainty around the UK economy post-pandemic. The sterling rose sharply soon after the cut-off date, although almost exclusive on the back of the dollar’s sell-off. 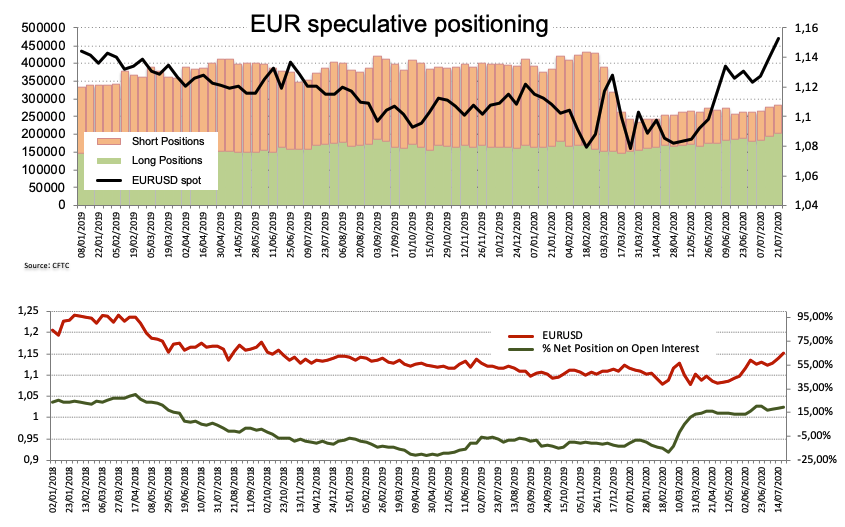